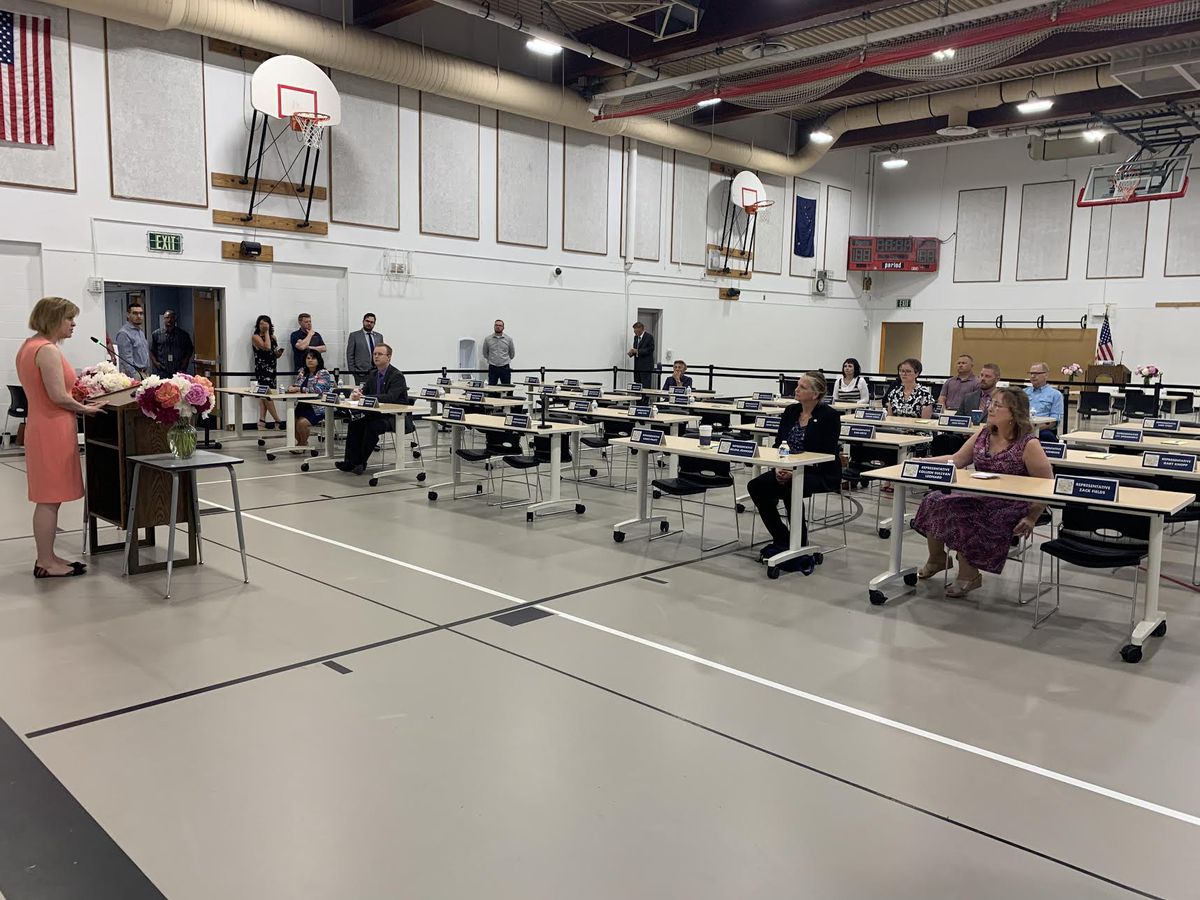 From Tegan Hanlon in Wasilla and James Brooks in Juneau:

A group of legislators met in Wasilla Tuesday morning and said they have no plans to go to Juneau, casting further doubt on the possibility that any of Gov. Mike Dunleavy’s 182 budget vetoes will be reversed in a scheduled vote Wednesday or by the Friday deadline.

“We’re 22 strong,” Sen. Shelley Hughes, R-Palmer, said in an interview Tuesday, referring to the group of lawmakers who believe Wasilla is the right location for the special session. “Twenty-two is a significant number when you need 40 to call ourselves in(to session) or 45 to override a veto.”

Meanwhile, 38 legislators were in Juneau Tuesday, and they believe the state capital is the rightful location for the special session.

“The Legislature’s conducting its business in Juneau, and that’s where it intends to remain,” said House Speaker Bryce Edgmon, I-Dillingham.

(In a June proclamation, Dunleavy called the special session for Monday in Wasilla, his hometown, and recommended Wasilla Middle School as the meeting spot. The legislators disagree sharply on whether Dunleavy has the power to set the location. The clock is ticking: They have until the end of the day Friday to override any of Dunleavy’s budget vetoes, which would take 45 of the 60 legislators to agree. They also have yet to agree on an amount for this year’s Permanent Fund dividend and there’s an unfinished capital budget.)

Tuesday’s meeting in a gym at Wasilla Middle School was brief, lasting less than two minutes. Twelve legislators attended, with two more arriving after it ended. About 18 people sat in the school bleachers to watch. There were no protests like a day earlier.

In brief remarks to the group, Sen. Mia Costello, R-Anchorage, thanked everyone for coming. Since they didn’t have enough legislators to take up official business, the meeting ended quickly. Costello said they’d be back on Wednesday and “again, hope that those in Juneau will heed the call made by Gov. Mike Duleavy.”

Hughes said Tuesday’s attendance was not reflective of the entire group of lawmakers who are standing behind Wasilla as the location of the special session. Some could not make it to the meeting. The meeting is more of a “technical session” until they have a quorum, she said.

“As a law-abiding lawmaker I need to be here,” Hughes said. “If the court rules that Juneau is legitimate, then that is a different story and I would consider going to Juneau because it would be within the law but it just simply is not. We must obey the law. The erosion of the rule of law is incredibly troubling.”

Rep. Sara Rasmussen, R-Anchorage, was not at Tuesday’s meeting. She said she was told that the Mat-Su delegation would attend the meetings at the middle school and let everyone else know if they were needed to establish a quorum.

Unless the governor changes the call to Juneau, she will be staying in Southcentral, she said.

Legislators in Wasilla also questioned the legitimacy of the meetings in Juneau.

Legislators in Juneau scheduled a vote for 11:30 a.m. Wednesday on veto overrides. Asked if he would be there, Rep. Laddie Shaw, R-Anchorage, said, “absolutely not.”

“The governor made the call and nobody else did, so I’m following the governor’s call,” Shaw said. “We’re just obeying the law.”

In Juneau on Tuesday, the Alaska Senate began business at 9 a.m. with a discussion of the state’s fiscal situation and the consequences of the unfinished capital budget, including the failure of the reverse sweep vote.

Shortly after 10:30 a.m., the House of Representatives convened a technical floor session. In addition to the absentees caused by the Wasilla dispute, several members of the coalition House majority were absent from the floor session.

In a technical session, no formal business is performed, and a quorum of 21 members is not required.

The Alaska Senate convened a full floor session at 11 a.m., voting unanimously (14-0) to approve a resolution that allows the House and Senate to meet once per week instead of once every three days.

Article II, Section 10 of the Alaska Constitution requires the House and Senate to meet every three days while the Legislature is in session, unless both bodies of the Legislature agree.

Senators then proceeded to give a series of speeches opposing the governor’s decision to call a special session in Wasilla.

The House Finance Committee convened at 1 p.m. for a hearing discussing the impacts of the governor’s vetoes on the University of Alaska and on state services.

Rep. Tammie Wilson, R-North Pole, arrived in the capital city after having spent Monday in Wasilla, and was present at the Finance Committee meeting. She is a co-chair of the committee.