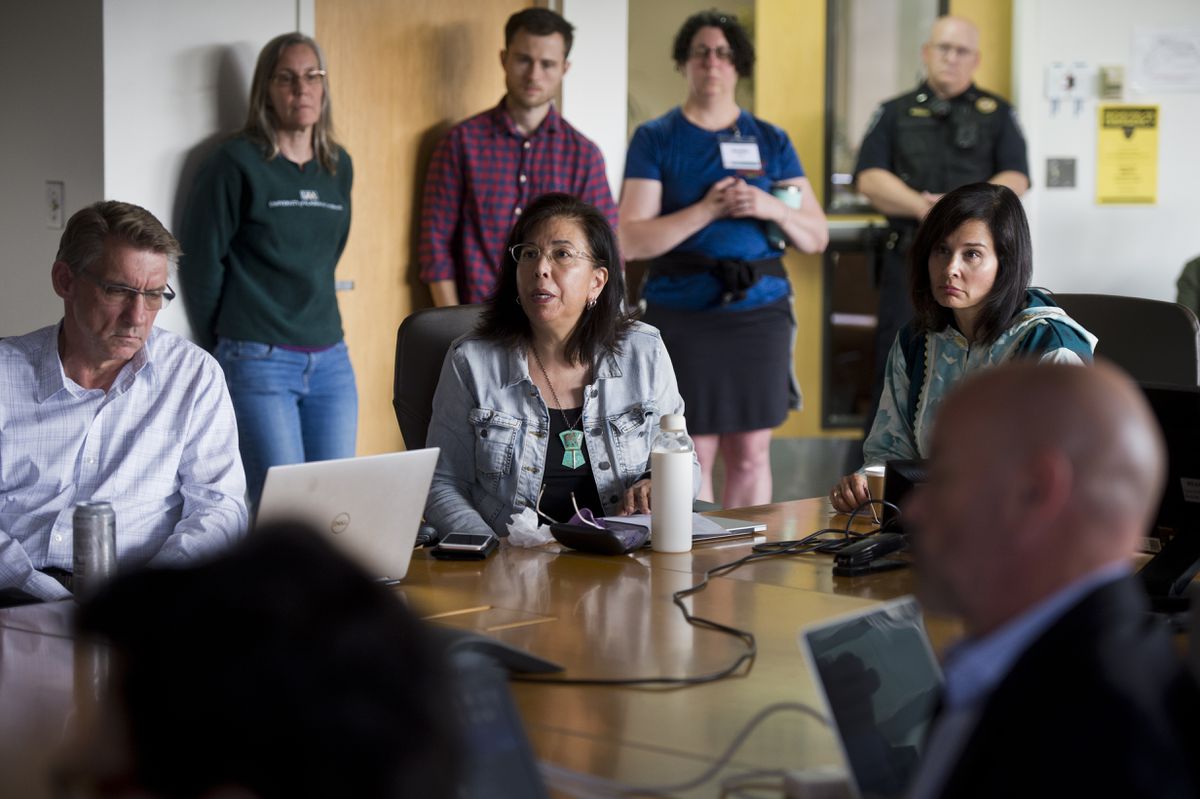 Maria Williams, a professor of Alaska Native studies at UAA who chairs UA’s Faculty Alliance, asks the Board of Regents to hold off on declaring exigency. The University of Alaska Board of Regents met to consider declaring financial exigency on Monday. (Marc Lester / ADN)

Maria Williams, a professor of Alaska Native studies at UAA who chairs UA’s Faculty Alliance, asks the Board of Regents to hold off on declaring exigency. The University of Alaska Board of Regents met to consider declaring financial exigency on Monday. (Marc Lester / ADN)

The University of Alaska governing board voted Monday to postpone a decision on whether to declare financial exigency, a rare step that would have allowed UA officials to more quickly end academic programs and remove tenured faculty as they grapple with a 41% cut to state funding.

Some members of the UA Board of Regents said it was too soon to make such a drastic decision because of uncertainty around whether state lawmakers will reach a deal this month and insert some funding for UA back into another bill. Some said they needed more information and more time. They pushed a decision to July 30.

“I think we owe it to ourselves to pause for a moment to ensure that we’re gathering the data and the information to make the best decision that we can,” said regent Sheri Buretta.

The regents’ decision comes amid a standoff in the Alaska Legislature, and mounting calls from organizations and individuals for those lawmakers to overturn Gov. Mike Dunleavy’s $444 million in vetoes, including the cut to UA. Meanwhile, others are standing behind the governor and calling for budget cuts and $3,000 Permanent Fund dividend checks.

UA is facing about a $135 million cut to its state funding this year.

Dunleavy vetoed an unprecedented $130.25 million in funding for UA, on top of the $5 million cut approved by the state Legislature. In total, that’s a 41% cut to the public university system’s state funding compared to last year, and roughly 17% of its overall budget.

A vote by some Alaska legislators to override Dunleavy’s vetoes failed last week, with a divided Legislature meeting in two different cities.

“I want to say, ‘I’m sorry,’” a tearful Sen. Click Bishop, R-Fairbanks, told regents at their meeting on Monday. Bishop, who supported overriding the vetoes, said the budget cut to UA “is nothing short of a travesty, and it sends the wrong message."

“But I want you to know I’m not done and we’re going to turn this around,” he said.

On Monday, the Alaska Legislature remained deeply divided. Members of the House Finance Committee unveiled a new bill that would fix issues with the state capital budget, reverse Dunleavy’s decision to veto $444 million from the state operating budget, and pay a dividend of $929 per Alaskan. But members of the Republican House minority oppose the introduction of the new legislation. Dunleavy could also still veto funding added into another bill.

UA President Jim Johnsen told regents that he’s talking with the governor and legislators about a path forward. At a meeting on Friday, Johnsen said, the governor told him he’s interested in working with UA.

“But he comes into this consideration from a position of pretty substantial strength,” Johnsen said. “We didn’t talk specific numbers at all.”

Dunleavy told reporters Monday that he’s been hearing from people about the vetoes he announced in late June, and “Alaskans are concerned.”

Dunleavy said UA students asked him this weekend what their university is going to look like after the cuts. He said that’s up to UA to reckon with.

“The university has a role in deciding... what its universe is going to look like under a smaller budgetary scenario,” Dunleavy said.

Dunleavy said he’d also heard from people who told him they believed there could be “efficiencies rendered from the university.”

Dunleavy has said his $444 million in vetoes were necessary to bring state spending more in line with revenue without raising taxes or reducing PFDs.

A document from the governor’s office explaining the specific veto to UA says the university system is too dependent on state funding and it has too many high-paid executives, too many duplicative programs and outcomes that are too poor. Johnsen has said that document lacks proper context.

In February, Dunleavy had introduced a similar cut for UA in his budget proposal, suggesting axing $134 million in state support for the university system. But during his candidacy for governor in 2018, Dunleavy didn’t indicate plans for significant cuts to the university system, where he was awarded his master’s degree. Asked in KTVA debates if he planned to cut UA funding, he answered, “No for now,” and “No plans. Get them land grants for funding,” the Anchorage television station reported.

Johnsen has said he didn’t expect such a big funding cut this year.

He also said UA has already been working on becoming more efficient. Since 2014, it has eliminated about 1,200 staff and faculty jobs, he said. UA had about 7,100 employees in fall 2018.

The debate now is not about whether UA can become more cost effective, but how it accomplishes that, Johnsen said. He said the concern is about how deep and how sudden Dunleavy made his cut, three days before the start of the fiscal year.

“That’s not a glide path, that’s a crash,” Johnsen said.

Johnsen warned regents Monday that every day they delay decisions about where to cut UA’s budget, the total funding reduction compounds.

In a 10-1 vote Monday, the regents ultimately decided to postpone a decision on exigency until July 30, with regent Mary Hughes opposed. She had said she wanted Johnsen to have all the tools he needed to reduce the budget.

Exigency basically means that UA’s expenses exceed its revenues and it can make cuts with less notice. For example, instead of providing tenured faculty a year’s notice of a layoff, the notice period is 60 days.

Few universities in the U.S. have declared financial exigency in the past, said Peter Lake, professor of law and director of the Center for Excellence in Higher Education Law and Policy at Stetson University in Florida. He couldn’t recall another entire public university system making such a declaration.

“I have no living memory, and I’ve been at this for 30 years, of an entire system declaring exigency,” he said. “That registers on the Richter scale.”

UA regents last declared financial exigency in 1986 in response to budget cuts, Johnsen said. However, he said, the governor then dialed back some of the reductions, and exigency wasn’t implemented.

The UA Faculty Alliance recently passed a resolution asking regents to delay voting on declaring financial exigency. Monday was too soon and the impacts of such a declaration are too severe, the chair of the alliance said. Impacts could include the loss of accreditation, dwindling student enrollment and more, Lake said.

Regents will meet next Monday to discuss restructuring UA.

Options to restructure include eliminating one or more universities and campuses, according to UA’s budget presentation Monday. Restructuring could also mean distributing the funding cut proportionally among universities and statewide administration or creating a “new UA,” described as a “more integrated, single accreditation model.”

Regent Karen Purdue said the work ahead is big and overwhelming.

“I’m willing to really dig in and explore all of these options, but I just feel it’s tragic if we have to decide this in two weeks,” she said.

She said UA needs to focus on what it does well, including research and training students for high-demand jobs. UA is going to downsize, she said, “but that doesn’t mean we have to destroy what we have.”