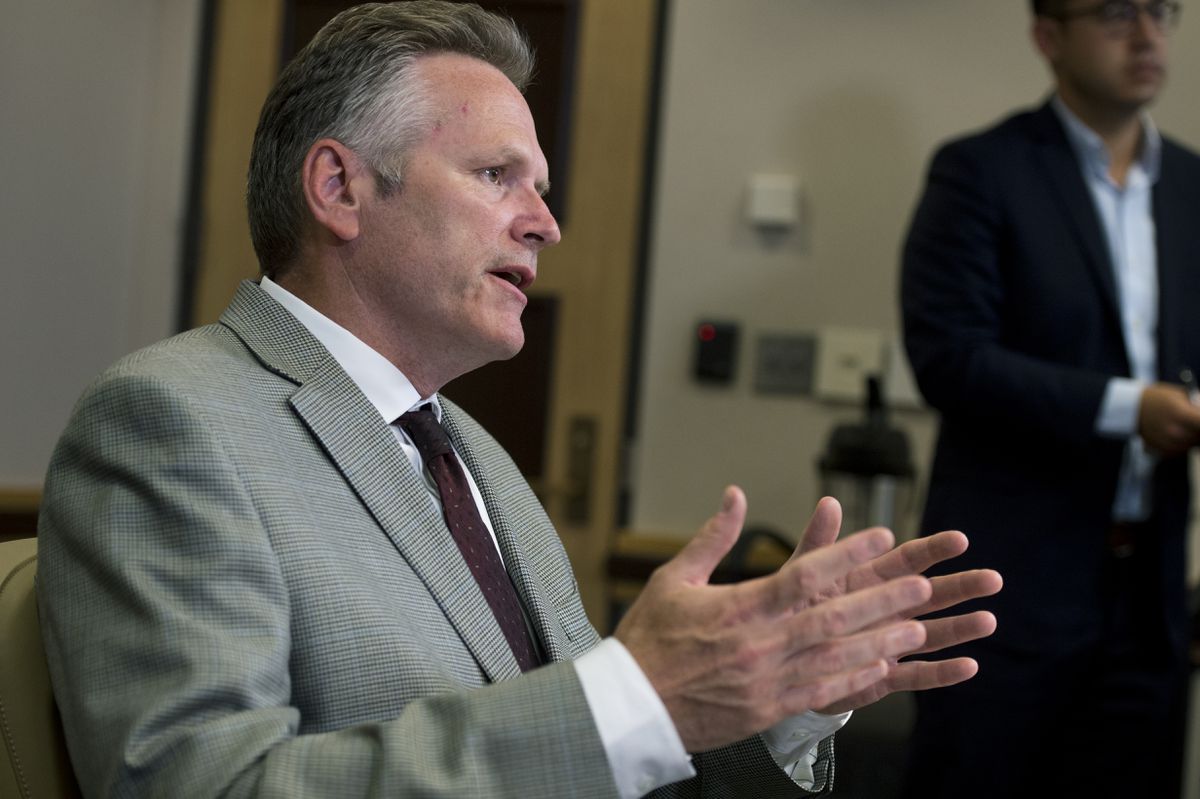 In an announcement Wednesday afternoon, Alaska Gov. Mike Dunleavy said he is amending the agenda of the ongoing special session and calling all 60 Alaska state legislators to Juneau. In addition, the governor has expanded the agenda — which was originally limited to the Permanent Fund dividend — by allowing lawmakers to consider the state’s capital budget, which sets spending for road and airport projects among other major construction.

The new location would end a week-and-a-half stalemate between two groups of legislators, one in Juneau and one in Wasilla, each claiming that it is meeting in the rightful place for the special session. The governor said Wednesday that he will introduce legislation addressing the capital budget on Thursday, and the Senate Finance Committee has scheduled a 3 p.m. hearing to consider it.

The proclamation does not affect the governor’s decision to veto $444 million from the state operating budget, and it does not directly advance efforts to break a deadlock over the amount of this year’s Permanent Fund dividend, but lawmakers said having everyone in the same building will allow speedier negotiations.

“In my daily discussions with legislators – those both in Wasilla and in Juneau – many have acknowledged that real progress needs to be made on the capital budget and that work cannot be completed until the legislature is meeting in one location,” the governor said in a prepared statement. “With sensitivity to the time that remains to capture federal funds, the Legislature will be able to quickly consider the capital budget, the PFD, and conclude this work for the people of Alaska before the end of July.”

“I think it’s terrific,” she said. “It helps by bringing us all together in the Capitol where we have access and the public has access to what’s going on.”

‘A lot of compromise’ needed

Senate Minority Leader Tom Begich, D-Anchorage, said the governor’s announcement isn’t a problem-fixing deal in and of itself, but it gets all 60 lawmakers in the same place, making deals more likely.

“I think this is the positive beginning of a long-needed conversation,” he said.

“It will take a lot of compromise among all 60 legislators and the governor to breach the current impasse,” he wrote. “I appreciate the compromise from the governor and other legislators to change the call of the session, and I’m confident we can move forward on an agreement that meets the deadlines in front of us.”

Pruitt and other legislative leaders said they expect work on the capital budget to be the first thing taken up when all 60 legislators arrive in Juneau Thursday morning, and final completion is not expected until next week at the earliest.

There is less agreement on the dividend and legislation to reverse some or all of Dunleavy’s decision to veto money from the state’s operating budget.

“I don’t know there’s really alignment in what should happen there,” Pruitt said of the Legislature’s response to the vetoes.

The House Finance Committee has been holding hearings all week on House Bill 2001, a proposal to pay a $929 dividend, fix the capital budget and reverse the governor’s vetoes.

“I think it’s dead on arrival,” said Rep. David Eastman, R-Wasilla. “It’s not a bill I think many legislators who I talk to regularly will support.”

Hughes, one of the lawmakers in Wasilla, said there might be some compromises. She said she didn’t agree with all the vetoes, including the governor’s decision to de-fund the senior benefit program.

“We’re going to have conversations about them, some a step-down approach perhaps,” she said. “I’m open to the conversations and I’m not afraid to have discussions about where we can mutually agree, where we need to negotiate and compromise. That’s our task right now.”

This will help clear the way for real negotiations and resolution on the budget! #akleg #akgov https://t.co/aPJSKVPcOm

In mid-June, Dunleavy announced that a special session would take place in Wasilla to address the Permanent Fund dividend. Almost two-thirds of the Legislature’s members objected to the governor’s decision, but that group lacked the 40 votes necessary to convene a special session of its own, with its own proclaimed agenda. Though they agreed they lack the ability to change the agenda, they convened the special session in Juneau on July 8, arguing that the Legislature’s constitutional rights allow lawmakers to set the location of their meetings.

Slightly more than a third of legislators, all Republicans, sided with the governor’s interpretation of state law and the constitution, meeting in Wasilla instead.

Sen. Mia Costello, R-Anchorage, said that in light of the governor’s announcement, she is prepared to go to Juneau. Costello had been among six state senators who were either in Wasilla or otherwise absent from Juneau. One hour before the governor’s proclamation, Costello presided over a meeting of the Wasilla group and said the next meeting of that group would be at 11 a.m. Friday. That will no longer take place.

“All along, I have supported the constitutional and statutory call made by the governor, and now it’s amended to call us into Juneau, I am going to obey that call and be consistent with the message that we need to do our work under the guidelines of our constitution and our statutes,” she said. “I will be in Juneau just like I was in Wasilla, ready to do the work of the state.”

Rep. DeLena Johnson, R-Palmer, also one of the legislators who went to Wasilla, said that with the state poised to lose more than $900 million in federal road construction aid without timely approval of the capital budget, action is needed.

“It’s time to get everybody in the same room and work this out. We don’t have the luxury of time or delay," she said.

With lawmakers in both Wasilla and Juneau, those in Juneau had enough votes to convene the special session but not enough to overturn Dunleavy’s vetoes. Doing so required the support of 45 legislators, and there were not even that many present.

They also lacked the votes to fix the state’s malformed capital budget because the 15-member Republican House minority has declined to vote for it until lawmakers approve a Permanent Fund dividend paid using the traditional formula in state law. That formula results in a $3,000 payment this year, which most members of the coalition House majority say is unaffordable.

As constructed, the capital budget requires a three-quarters supermajority of the Alaska House and Alaska Senate because it includes what’s known as the “reverse sweep," a procedural vote that prevents dozens of program-specific savings accounts from being automatically drained into the Constitutional Budget Reserve.

The automatic drain has threatened more than $300 million in state programs above and beyond the budget vetoes approved by the governor, according to a preliminary estimate from Sen. Natasha von Imhof, R-Anchorage and co-chair of the Senate Finance Committee.

Speaking by phone after the governor’s announcement, Pruitt said his caucus will no longer require a traditional dividend before voting for the capital budget.

“I still would love to see that happen, but there’s no reason to lose the federal match,” he said, referring to federal aid for roads and airports.

“If we need to take it up first, that’s fine,” Pruitt said of the capital budget. “This is not about playing games with Alaska.”

“Over the last two weeks, we have been talking nearly daily with the governor,” Giessel said.

This week, the four began talking in person in Anchorage.

“I think it helped,” Edgmon said. “Meeting with the governor in the same room, as opposed to meeting by phone has helped.”

“I can tell you that the team of four people … emphasized to him that there’s no possible way to get to a solution here if we’re in separate places,” Giessel said. “I don’t know it changed his mind, necessarily. Perhaps he saw the logic of our appeal.”

Agreement on the Juneau location came after those in Wasilla suggested Anchorage as a compromise location but had that suggestion refused by those in Juneau.

“I’m disappointed that those in Juneau refused the neutral location in Anchorage that we had suggested, but we’re going to follow the law, so when the governor makes the change to Juneau, we’ll be there,” said Hughes, who was not a negotiator but was familiar with the negotiations.

While the negotiators agreed on Juneau and the need to address the capital budget, they weren’t able to reach a wider agreement on the amount of this year’s dividend.

One option discussed by the negotiators was a concept involving a $1,600 payment this fall and another $1,400 payment conditional upon a change to the traditional dividend formula. Doing so would fulfill the desire for a $3,000 payment but also address legislative concerns that the traditional formula is no longer sustainable.

“I would say that’s on the table, it’s been a discussion item, but there’s no agreement on how to proceed forth with that,” Edgmon said of the split dividend.

Pruitt said he is aware of lawmakers who want to make a traditional dividend contingent upon a formula change.

“I know that the governor and others are not of that mindset,” he said.