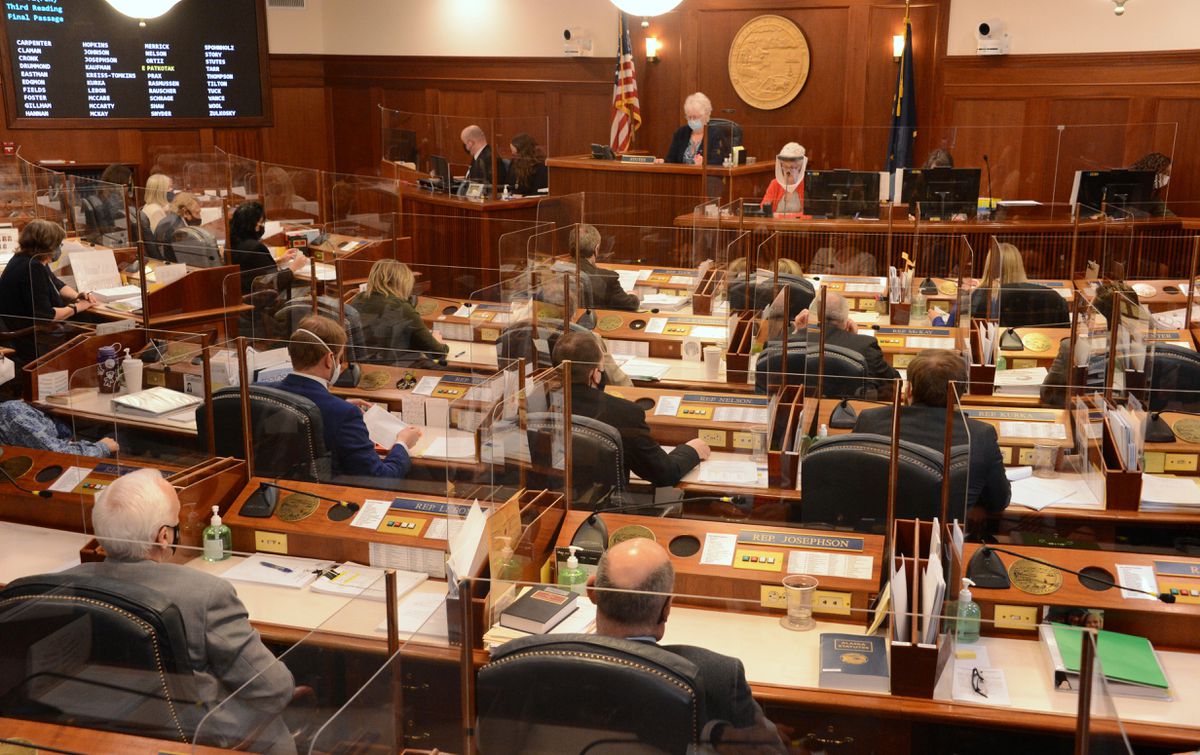 The Alaska House of Representatives prepares to vote Monday, May 10, 2021 on a statewide operating budget for the fiscal year that starts July 1. (James Brooks / ADN)

The Alaska House of Representatives prepares to vote Monday, May 10, 2021 on a statewide operating budget for the fiscal year that starts July 1. (James Brooks / ADN)

JUNEAU — The Alaska House of Representatives has approved a multibillion-dollar state operating budget that keeps the state running past July 1, but before the final vote, lawmakers added an amendment intended to defund state-provided abortion services.

Democratic lawmakers objected to the amendment, saying that it harms the rights of women, is unconstitutional and will provoke lawsuits. Republican lawmakers said it was important to them to speak up for the rights of unborn Alaskans. The amendment passed 21-18.

About an hour later, the House voted 23-16 on Monday to approve $4.2 billion in services funded by tax revenue and transfers from the Alaska Permanent Fund. When federal money and fee-funded programs are included, the budget exceeds $10 billion.

“This is largely a flat budget compared to last year,” said Rep. Neal Foster, D-Nome and co-chair of the House Finance Committee.

The budget bill now advances to the Alaska Senate, which is expected to introduce a competing proposal later this week. Lawmakers are expected to negotiate a compromise, which will be sent to Gov. Mike Dunleavy, who may veto individual items.

Federal economic aid was used to artificially shrink the tax-funded portion of the budget and increase the amount of money available for the Permanent Fund dividend or spending on construction and renovation projects, both of which are in separate legislation.

The true cost of annual state services, according to estimates from the nonpartisan Legislative Finance division, is between $4.5 billion and $4.6 billion in tax and Permanent Fund revenue.

Twenty members of the coalition House majority voted in favor of the budget, as did Fairbanks Reps. Bart LeBon and Steve Thompson, members of the 18-person Republican minority, and independent Republican Rep. Sara Rasmussen of Anchorage. Rep. Josiah Patkotak, I-Utqiagvik, was excused absent.

Rep. David Nelson, R-Anchorage, voted against the budget and criticized its reliance on federal aid. He and other minority Republicans said it fails to address a fiscal situation that leaves the state without enough money to pay for both a traditional Permanent Fund dividend and currently budgeted state services.

“We have yet to have the deeper conversation about what the future of Alaska will look like,” he said.

“I have to trust that people looked and worked hard and offered amendments, and we were only able to find about $5 million in cuts,” she said.

“I think we’re responding to the public’s demand for the services they value, and we’re doing the best we can,” Tarr said.

Other members of the minority said new guidelines for federal aid, released Monday, mean the House’s budget plan is fatally flawed because it uses more federal money than is available.

“I have a lot of concern about that,” said House Minority Leader Cathy Tilton, R-Wasilla, shortly before the final vote.

Foster said the Senate can make corrections, and House negotiators will work on a compromise. Rep. David Eastman, R-Wasilla, criticized the idea that the budget “will be resolved behind closed doors by six people, maybe four.”

Monday’s vote came after delays caused by the weeklong absence of Rep. Grier Hopkins, D-Fairbanks, and deep disagreements between the coalition majority and the Republican minority.

When debate resumed Monday morning, lawmakers voted to limit debate to two minutes per legislator, per amendment, and work proceeded rapidly before a final vote about 5:30 p.m.

The abortion-funding amendment received perhaps the most debate, with multiple lawmakers rising to speak for and against the $350,000 budget cut proposed by Rep. Christopher Kurka, R-Wasilla.

The Alaska Supreme Court has repeatedly struck down state laws and regulations limiting access to publicly funded abortions, and Democratic lawmakers predicted the same will happen if this budgetary language is approved by the Senate and Dunleavy.

“We are watching closely. It’s unconstitutional,” said Megan Edge, a spokeswoman for the Alaska chapter of the American Civil Liberties Union.