Lydia Jacoby, a 17-year-old swimmer from Seward, is headed to the Summer Olympics 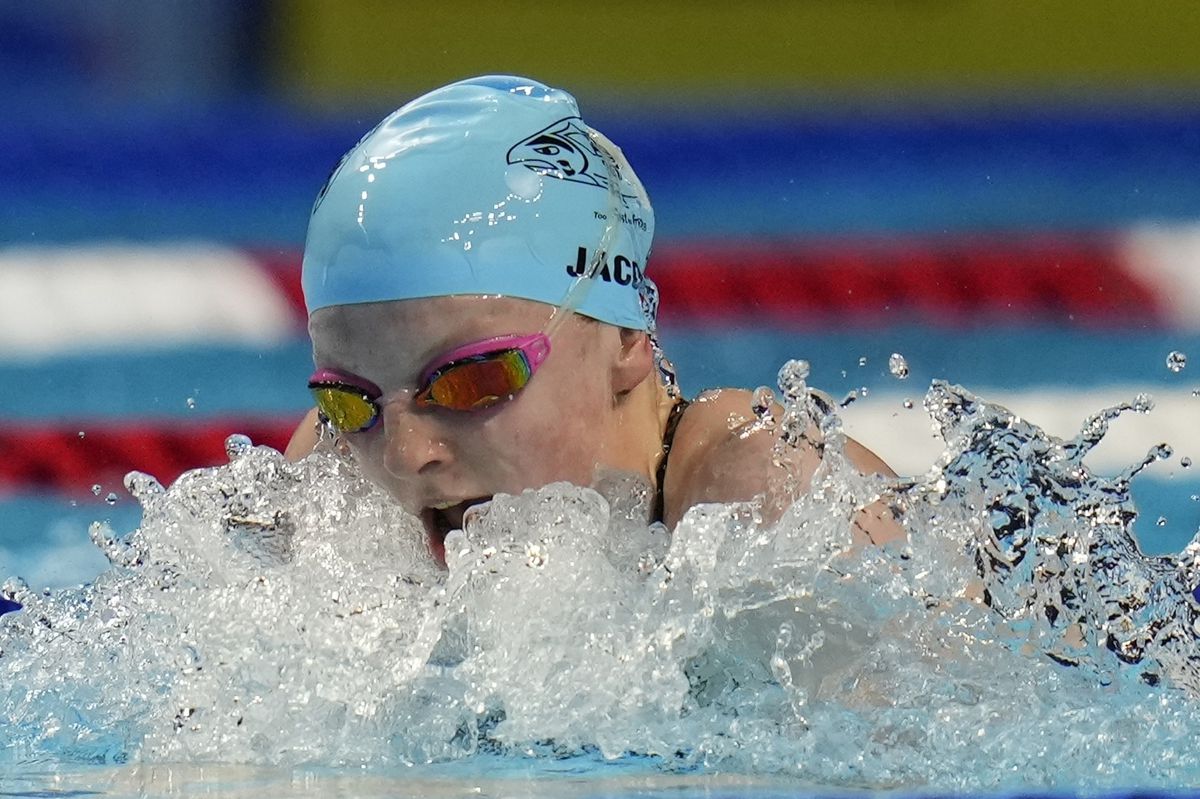 Jacoby, a member of the Seward Tsunami Swim Club, swam the second-fastest time in the world this season to grab second place in the women’s 100-meter breaststroke Tuesday at the U.S. Olympic Trials.

By finishing second, Jacoby secured a spot on the U.S. team headed to Tokyo next month, although her spot won’t be confirmed until later in the Trials, which end Sunday in Omaha, Nebraska.

“I can’t tell you how much it means to me,” Jacoby told Swimming World Magazine after the race. “I’m so excited.

“It means so much to me to be able to represent my state at a meet like this. And I’m so excited to now represent my country as well. It’s amazing.”

Jacoby is the second Alaskan to qualify for the Summer Olympics. Alev Kelter of Eagle River is on track for her second Olympics as a member of the women’s rugby 7s team.

Lilly King, the world record-holder in the event, won the race in 1 minute, 4.79 seconds.

“I was not expecting Lydia to have that incredible race,” King told the Associated Press. “I’m really excited to have a new partner going into Tokyo.”

She's heading to her second Olympic Games in the 100m breaststroke. #SwimTrials21 pic.twitter.com/llcoh5mxO2

At that point, Jacob’s semifinal time was the world’s fourth-fastest of the season. It propelled Jacoby into the finals, where she faced King and Lazor, who entered the Tuesday race with the No. 1 and No. 2 times in the world, respectively.

Now Jacoby owns the season’s second-fastest time, trailing only King’s 1:04.72 from Monday’s semifinals. King set the world record of 1:04.13 at the 2017 World Championships.

Jacoby was fifth at the turn in Tuesday’s finals, but once again she swam the fastest final 50 meters to pass everyone but King. The day before, she also posted the fastest time in the final half to come from behind for the semifinal win.

In the days before the race, Jacoby — who will be a senior at Seward High School in the fall — imposed a media blackout: No interviews until after her race.

“I knew it was going to be a very high-emotion meet because so many people have so much riding on it,” Jacoby told Swimming World. “I came into this meet obviously with expectations for myself, but knowing that I have so much of my career ahead of me, so just trying to keep that in perspective.

“It means so much to me that that headspace worked out and I was able to get past the bigger emotions and focus on my races.”

According to swimswam.com, Jacoby didn’t secure her spot on the Olympic team until the final few meters of Tuesday’s race.

King held the lead all the way to win in 1:04.79, but 17 year-old Lydia Jacoby surged the final few meters to touch 2nd. #SwimTrials21

In all, a dozen Alaskans have qualified for the trials — Eagle River’s John Heaphy joined Jacoby at this year’s meet — but until this week, Derek Gibb of Petersburg was the only one to make it past the preliminaries and into the 16-swimmer semifinals, according to veteran coach Cliff Murray of Anchorage’s Northern Lights Swim Club. Gibb placed 15th in the 50-meter freestyle at the 2004 Olympic Trials.

Jacoby qualified for the Olympic Trials back in December 2018 as a 14-year-old. She has steadily lowered her times since then, despite training difficulties that arose last year during the pandemic.

Pools closed down, the Tokyo Games were pushed to 2021 and so were the Olympic swim trials. Jacoby stayed active by running, skiing and pushing chairs out of the way in her family’s home so she could do squats and pushups every day.

When Anchorage pools reopened, Jacoby and her mother commuted between Seward and Anchorage so training could resume.

And when she returned to competition, Jacoby excelled. At an April meet in California, she asserted herself into the Olympic conversation with a personal-best that ranked her among the world leaders.

And she’s not done yet. On Thursday Jacoby will swim the women’s 200-meter breaststroke, an event in which she has the 15th-fastest qualifying time (2:27.39).