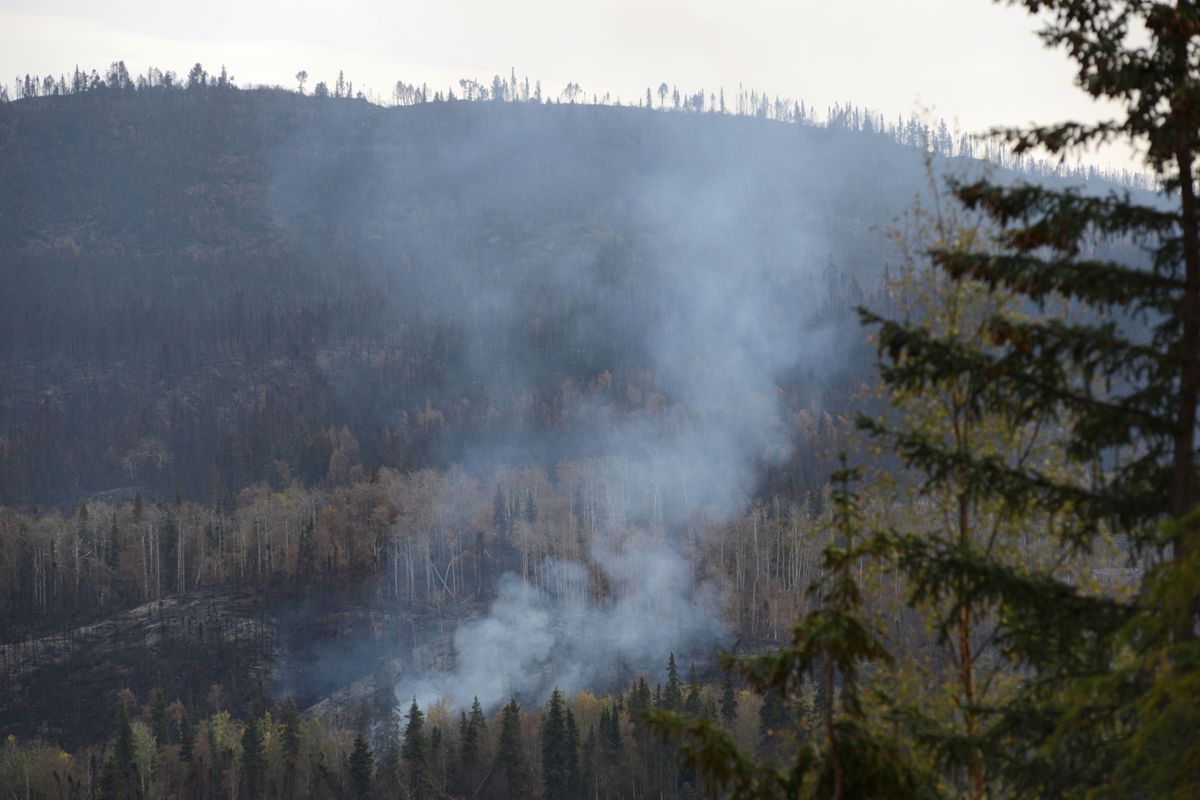 Firefighters have begun downsizing the equipment and personnel working on the Swan Lake fire, but are continuing to monitor the defenses around Cooper Landing, fire officials said Tuesday.

The fire, which has burned on the Kenai Peninsula for more than three months, is “creeping and smoldering” with “not a lot of active flame,” said Nate Bogenschutz, a public information officer with the Northern Rockies Team Four. Fire officials from Team Four took over management of the fire Monday evening.

There has been some single tree torching within the perimeter of the fire, Bogenschutz added.

The Swan Lake fire, which has now burned 163,714 acres, is 37% contained officials reported.

Firefighters have started “backhauling” equipment in some areas, while "continuing to monitor the sprinkler systems and hose lines around Cooper Landing,” Bogenschutz said.

August brought strong winds and unseasonable drought to the Peninsula this summer, causing the the Swan Lake fire to grow rapidly. By the end of the month, more than 700 firefighters were working to contain the blaze and protect Cooper Landing. On Tuesday, officials said that number was now down to 430 personnel.

Although rain has contributed to dampening fire behavior this weekend, “it hasn’t been enough to put the fire out,” Bogenschutz said. Rain isn’t penetrating through the organic material, he added.

Less than two-tenths of an inch of rain has fallen on Cooper Landing this week, said Lucas Boyer, a meteorologist with the National Weather Service. Most of that rain, 0.13 of an inch, had fallen since noon Saturday, he said.

Without significantly more rain this season, the Swan Lake fire “has the potential to go until the snow flies,” Bogenschutz said.

More rain is forecasted for Southcentral Alaska this week, Boyer said, but it’s difficult to predict exactly where significant amounts of rain will fall.

Progress containing the Swan Lake fire has led state and federal officials to begin opening recreational areas that had been closed earlier this summer.

The Alaska Department of Natural Resources Division of State Parks reopened a section of the Upper Kenai River between Cooper Landing bridge and Jim’s Landing to 24-hours public use, with the exception of the continued closure of a channel on the south side of the river from about River Mile 69.5 to River Mile 71.5, which is still being used to support firefighting operations, a joint announcement stated Monday.

Officials with the U.S. Fish and Wildlife Service Kenai National Wildlife Refuge have opened two boat launches. Jim’s Landing boat launch was opened to day use, as well as the overflow parking across the Sterling Highway from Jim’s east of Skilak Lake Road. The Lower Skilak Boat Launch, including the west entrance of Skilak Lake Road at mile post 75.2 of the Sterling Highway, has also been opened.

Bottenintnin Lake has been opened, said Leah Eskelin, a public information officer with the refuge on Tuesday afternoon, a correction to Monday’s announcement,

The Kenai River is still closed from Jim’s Landings to Skilak Lake, as are “all refuge lands that have been burned,” the announcement adds.

Officials warned that some newly opened areas have been damaged by the Swan Lake fire and asked that those areas, like ash pits, be avoided until they are determined safe.

The community of Cooper Landings remains at a “ready” evacuation status, officials said Tuesday. They have remained at steady since being downgraded from “set” a week ago.