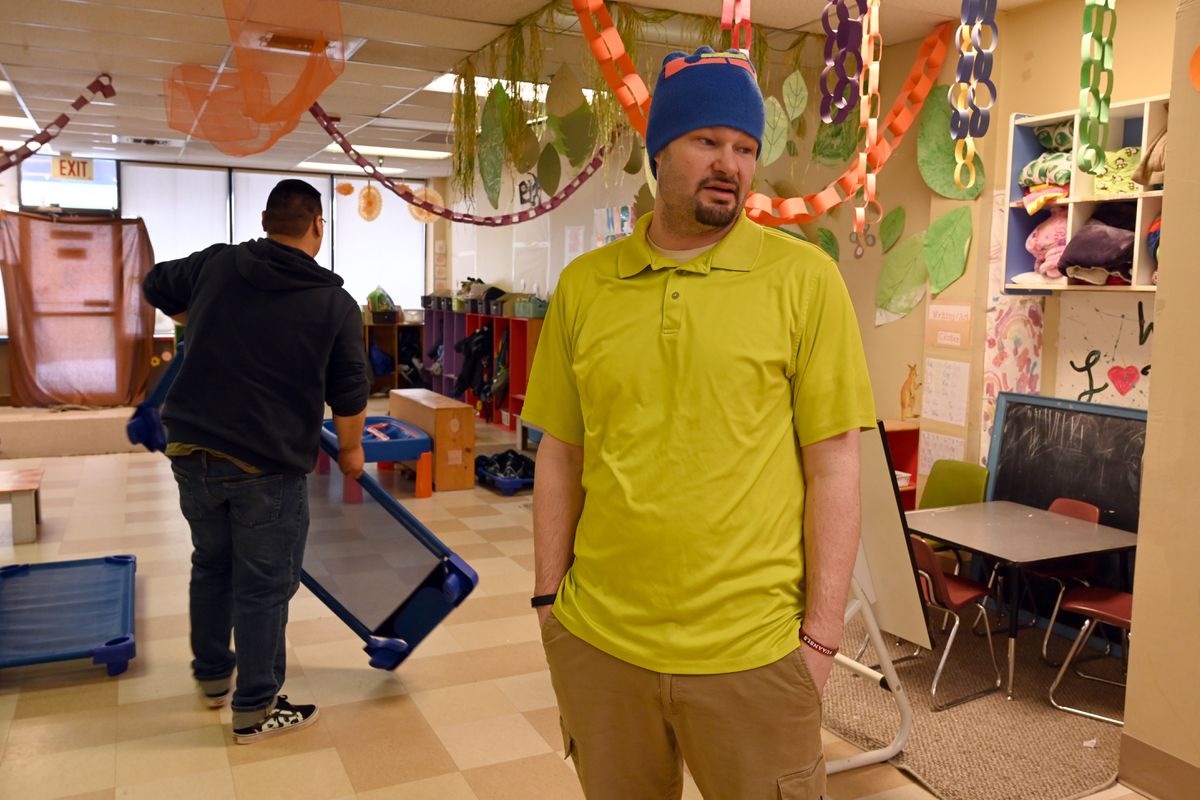 Kyle Gardner, owner of Building Blocks child care center talks about the dire situation for child care and COVID-19, Monday, March 17, 2020. With the newly announced funding, Gardner is still uncertain about the future, but he no longer has to worry about closing his business permanently in July, he said. (Anne Raup / ADN)

Kyle Gardner, owner of Building Blocks child care center talks about the dire situation for child care and COVID-19, Monday, March 17, 2020. With the newly announced funding, Gardner is still uncertain about the future, but he no longer has to worry about closing his business permanently in July, he said. (Anne Raup / ADN)

Alaska’s child care providers, hit hard by the pandemic shutdown, have clamored for financial assistance. Now, the state has announced that it will provide them with more money from its portion of federal relief funds.

A total of $10.5 million will go to child care providers from Alaska’s federal CARES Act funding, according to a statement Thursday from the state Department of Health and Social Services. The money is intended to help make up for income lost in April and May, the department said.

Businesses that provide child care are important as the state continues to reopen, Department of Health and Social Services Commissioner Adam Crum said in the statement.

“We found that the funding available to this sector was not coming fast enough, so under direction from Governor Mike Dunleavy, we were able to use State of Alaska CARES dollars to provide additional money for those businesses that care for our children,” Crum said.

Child care is critical to the economy because it allows parents to return to work, said Stephanie Berglund, CEO of thread, an Alaska nonprofit that acts as a child care resource and referral network.

“Programs really need it,” Berglund said of the new funding. “They are taking a huge financial hit, and we need them to weather the storm through COVID and beyond in order to provide strong child care infrastructure when this is all over.”

[‘It’s not the same, Mama': As summer camps open in Anchorage, kids and staff adapt to pandemic restrictions]

This new funding comes after the state had previously told child care providers to expect more federal relief money than they actually ended up receiving.

In April, the state’s Division of Public Assistance had announced in an email to all licensed child care providers that they would get enough relief funds to make up for income they would lose over three months: March, April and May. But that promised funding, which the state said in May totaled just $6.5 million, only ended up covering payments for March. At that time, the state also provided an additional $2.6 million in its own CARES funds for that one-month payment.

Providers like Kyle Gardner, owner of Building Blocks Early Learning Center in Midtown Anchorage, expressed dismay that they would only be receiving one-third of the funding that the division had said it would distribute. Gardner began an email campaign among providers to lobby for more money. After asking for legal counsel on the matter, he testified along with several other providers to the Alaska Legislature’s House Finance Committee on Wednesday, he said.

“It’s a good thing. It is still unfortunately kind of a far cry from what had been promised,” Gardner said of the new funding. “We certainly did have to fight pretty hard for it.”

For Gardner’s business, the new funding still adds up to less than what he was told in April he would get from the state. He’s still uncertain about the future, but he no longer has to worry about closing his business permanently in July, he said.

When the state shut down in March, about half of Alaska’s child care providers temporarily shut their doors, according to Berglund. Others limped by, operating at severely reduced capacities.

Now, around the state, about 69% are open, but some have closed permanently, including at least five in Anchorage, Berglund said. The ones that are open are only operating at 30% to 50% capacity, hamstringing their income.

Even if child care providers opened to full capacity, they wouldn’t necessarily have enough income to survive, because families aren’t sending their children out of concern for health risks or because they can no longer afford it, Berglund said.

“I’m hopeful that the many conversations about child care have elevated the understanding and awareness of decision-makers to help encourage them to continue to invest in and allocate more to the needs of child care,” Berglund said.