Beyond Anchorage, most of Alaska declines to mandate COVID-19 masks 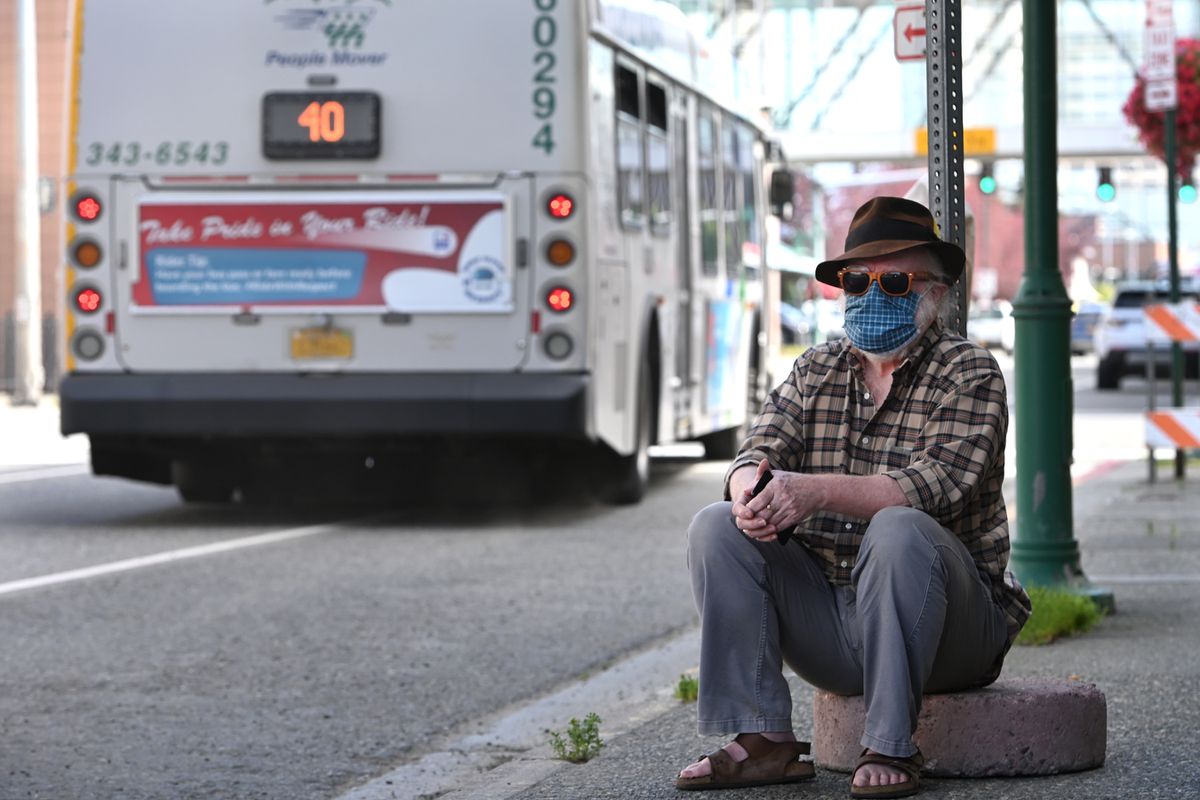 Charles McKay wore a mask while waiting for a bus along 6th Avenue in downtown Anchorage on Thursday, July 16, 2020. When asked why he wore a mask McKay said, "It seems to be the responsible thing to do." (Bill Roth / ADN)

Charles McKay wore a mask while waiting for a bus along 6th Avenue in downtown Anchorage on Thursday, July 16, 2020. When asked why he wore a mask McKay said, "It seems to be the responsible thing to do." (Bill Roth / ADN)

Alaska’s largest city has mandated residents to wear masks in public to reduce the spread of coronavirus, but most of the 49th state’s cities and boroughs are declining to follow suit.

According to a survey by the Daily News, among the state’s largest cities, only Anchorage, Cordova, Dillingham, Kotzebue, Seward, Unalaska and Valdez mandate masks in all public indoor spaces, including stores and restaurants. Most of those mandates allow masks to be removed for activities such as eating and receiving a haircut, when wearing a mask may not be practical.

Among boroughs, only the Northwest Arctic Borough is requiring masks. The Lake and Peninsula Borough has mandated masks at its 70 lodges and hotels, but not in general.

Some smaller communities, such as Gustavus in Southeast Alaska and Emmonak in Southwest Alaska, have ordered mask-wearing in public, but towns and villages without mask orders appear to outnumber those with them.

Officials in communities without mandates said they felt mandated mask-wearing wasn’t needed, would be difficult to enforce, wasn’t legal or lacked sufficient support from the public.

All of the contacted cities and boroughs said they are encouraging residents to voluntarily wear masks, and several said many local businesses — particularly grocery stores and large chains, such as Walmart — are requiring them.

Local officials in several cities without mask mandates said they are following the lead of Gov. Mike Dunleavy. The governor has repeatedly said he opposes a statewide mandate and has talked at length about his opposition.

In a video briefing on Monday, he said, “I certainly don’t want to infringe upon the rights of folks. I take that very seriously. People that know me ... know where I come from on our individual rights, which is what makes America different from any other country in the world.”

“The Dunleavy administration’s policy is to allow local governments, in consultation with the administration, the ability to create local health mandates,” Dunleavy deputy communications director Jeff Turner said in a written statement later in the week.

“While the governor does not plan to issue a statewide mask mandate, he strongly encourages the use of masks in combination with social distancing, frequent hand washing and other precautionary measures known to prevent the spread of COVID-19,” Turner said.

Those voluntary measures have seen success in some parts of Alaska.

In Bethel, city council member Mark Springer said there’s no mask mandate, but “but everybody’s wearing them, which is really gratifying.”

Some local officials, particularly in rural Alaska, said their case counts do not warrant mandatory mask-wearing.

In Southwest Alaska, many rural communities are restricting travel instead of requiring masks. In the Southeast town of Skagway, where summer tourism has dried up amid a cruise-travel shutdown, Mayor Andrew Cremata said, “We have yet to have a case. But it’s highly possible we would implement (a mask order) swiftly if a case were to arrive.”

Other local officials said a mandate would be difficult to enforce or that their local government lacks the legal authority.

Three mayors in the Fairbanks area, Alaska’s second-largest metropolitan area, issued a joint proclamation on Wednesday urging mask-wearing. Fairbanks city mayor Jim Matherly said his community is only part of the larger borough, and if he tried to issue a mandate on his own, it would be ineffective because people could simply cross city limits and be outside his jurisdiction. (Masks are required in city hall.)

“I’m just trying to catch more flies with honey than vinegar,” he said.

A mask mandate in Ketchikan failed when its sponsor withdrew the idea after bill drafters included a proposed $500 fine. He told local public radio station KRBD that he didn’t want to enforce it that harshly.

Alaska’s constitution permits several types of local governments, and Fairbanks is what’s known as a “home-rule” city. It has all governmental powers not explicitly reserved by the Alaska Legislature for the state. Few local governments are home-rule jurisdictions. Most, like the Fairbanks borough, have lesser powers, and Matherly said that borough would be unable to mandate masks.

Dillingham and Unalaska aren’t home-rule governments, but they’ve issued mask mandates anyway under a state law that allows local governments to temporarily take emergency action. Earlier this year, the state’s Division of Community and Regional Affairs advised local governments that the law could be used for things like quarantines.

But Nils Andreassen, director of the Alaska Municipal League, said those actions “are on shaky legal ground. The test will be when they try to enforce (them) and someone sues. Until the attorney general’s office puts something out that is clear about it all, there’s just too much uncertainty and liability.”

He also said many communities lack the public health or police resources to enforce a mandate.

“I had one member say, ‘It’s all about resources: Who has the capacity to implement them and who doesn’t?‘” Andreassen said.

Cordova has a well-staffed local public health system, allowing it to pass and then enforce a mask order, he said.

On Tuesday in Sitka, a mask mandate failed 4-3 after extensive public testimony against the proposal. Residents said they were worried about their personal freedom and questioned the effectiveness of the proposal.

“I’m not going to wear a mask unless I’m in somebody’s business and I have to,” he said.

The City and Borough of Juneau will consider a mask mandate next week. City assemblywoman Michelle Hale, the sponsor of the proposal, said public testimony has run about 75% in favor, 25% against, and other members of the Assembly agreed with that assertion.

“I would say there’s a good chance that it passes,” Hale said.