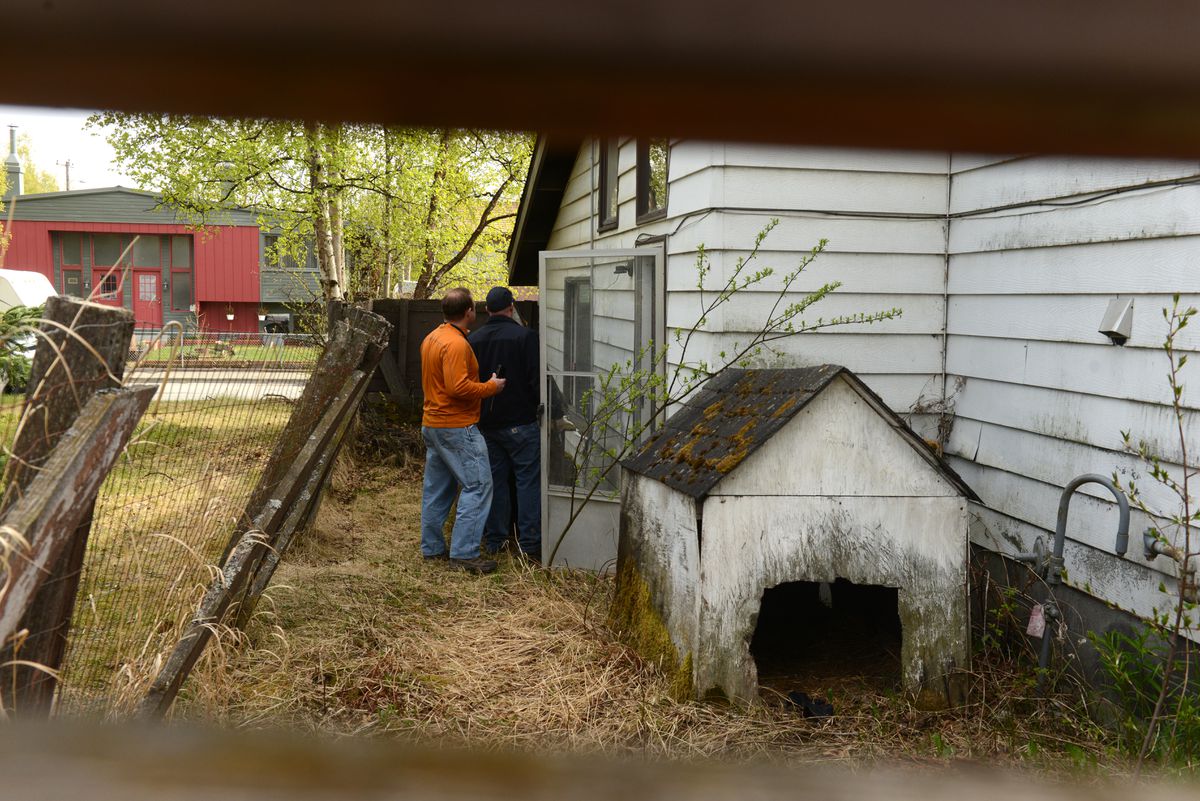 Municipality of Anchorage code enforcement officers Clark Rosencrans and William Peterson inspect the house at 1430 Columbine St. and post a notice of violation on Wednesday, May 17, 2018. A notice to vacate the structure had previously been posted. Two people illegally in the house left when the officers were there. (Bob Hallinen / ADN)

Municipality of Anchorage code enforcement officers Clark Rosencrans and William Peterson inspect the house at 1430 Columbine St. and post a notice of violation on Wednesday, May 17, 2018. A notice to vacate the structure had previously been posted. Two people illegally in the house left when the officers were there. (Bob Hallinen / ADN)

Among the more than 100 buildings on a growing city inventory of empty or abandoned Anchorage buildings is a white split-level house on Columbine Street in Airport Heights.

Clark Rosencrans, a city code enforcement officer, climbed its front stairs recently, stepping around trees growing up through the steps. He stapled a red "NOTICE OF VIOLATION" sign next to the front door. The house was condemned on May 1, but this week, police told him people were squatting there.

It's part of a more aggressive push by the city to deal with urban blight and motivate landlords to do something about derelict buildings that attract squatters, lower property values in the area and cause other trouble.

In April, Airport Heights residents told Mayor Ethan Berkowitz they were fed up with years of constant trespassing and problems at the house on Columbine Street and three other derelict houses nearby.

"We have watched people remove furniture, copper pipe and wire," Jeff Bailey, Helen Howarth and George Faust wrote in an April 23 letter to Berkowitz, which was signed by dozens of other neighbors. "We have cleaned up trash including needles. We have been accosted by people who say we have no right to question their trespass. We have purchase plywood to board up kicked in doors and broken windows."

Airport Heights is a desirable neighborhood, they said. Families could live in the homes if the owners fixed up or sold them.

Since 2016, Anchorage law has required registration for buildings that haven't been legally lived in or used for at least six months, with some exceptions for seasonal buildings. The law followed similar measures adopted in hundreds of other U.S. cities in the past decade. In Minneapolis, where there was a flood of foreclosures after the housing bubble gave way to a crop of empty homes, the city charges hefty annual fines to the owners of empty homes with code or nuisance violations.

[Own an empty, boarded-up building in Anchorage? It could cost you.]

In Anchorage, annual fees start at $100 a year. Property owners have to do minimal maintenance and secure the building against people breaking in.

First, the goal of the registry was to get a sense of the scope of the problem, said city manager Bill Falsey. He said that work has now largely been done.

More than 70 buildings are on the registry today. Some 30 additional buildings have been identified as vacant or abandoned but have not yet been registered, because owners haven't responded to paperwork. For a handful of other properties, owners have obtained a building permit, which disqualifies them from the registry.

The registry spans across Anchorage, and includes a mix of houses, apartments, condos, duplex units mobile homes and commercial properties. Some have been damaged by fires.

While Rosencrans and his colleague, Bill Peterson, posted the notices on Columbine Street, two people climbed out of ground-story windows. A woman in a hoodie and a backpack walked off into the alley; a man, also with a backpack, sprinted off through the overgrown backyard.

Through an open window leading into what looked like a basement bedroom, Rosencrans pointed at a propane tank. It was being used for heat, he said.

Rosencrans and Peterson are the city's only two code enforcement officers who deal with empty and abandoned buildings. They say they can't possibly keep up with the workload. They squeeze the visits to empty buildings in between other duties, like inspecting licenses for business and contractors and working with property owners to rehabilitate damaged buildings.

Much of the job involves tracking down property owners, which can often be tricky and time-consuming.

"OWNER CALLED FROM LOUISIANA TOLD ME HAS BEEN RENTED," reads a note made by one of the officers after a site visit to a property in Midtown, which is shown on the public registry.

"PROPERTY USED ON A SEASONAL BASIS FOR A TOUR SALES OFFICE," another note reads.

One note says: "OWNERS HAS PASSED AWAY AND THE HOME HAS CAUGHT ON FIRE."

That's for a small cabin at 3811 Thompson Ave. in Mountain View, where an elderly man was beaten to unconsciousness by a group of teenagers during a break-in in fall 2016. The man, Don Nelson, died of his injuries the following year.

Squatters started living there and the house caught fire last year, Rosencrans said. At this time, he said, he and Peterson were trying to find someone responsible for maintaining it, without success.

The most difficult cases involve the death of a property owner, Rosencrans said. He and Peterson have to figure out who has power of attorney, or wait for a bank to take over.

After posting the red violation notices at the house on Columbine Street on Thursday, Rosencrans and Peterson drove to a house on a quiet street in Russian Jack a few miles away. They hoped to find one of the owners of the Columbine address. Rosencrans had sent repeated notices by mail and made phone calls. He'd had no luck getting the homeowner to register the building as vacant.

When no one answered the door, Rosencrans stuck a white "Notice of Violation" form into an already-stuffed mailbox. The owner had three days to respond. Failing to do so would lead to fines starting in the hundreds of dollars.

On Friday, Rosencrans got a phone call. It was the owner of the Columbine Street house. The two met at the house later that day.

The police did a sweep of the house. Three more people were found illegally living inside, Rosencrans said.

The owner, who didn't return multiple calls for comment, told Rosencrans he'd register the building Monday. He also started boarding up the windows, Rosencrans said. A follow-up inspection was set for this coming week.

The owner told the officials the house was a rental property that fell into disrepair because of problems with tenants, Rosencrans said. He told them he hadn't had the money to fix it, Rosencrans said.

While the owners of buildings on the list are paying property taxes, people usually cite financial reasons for abandoning a building, Rosencrans said. Sometimes, a person inherits a property but doesn't have the money to fix it up, he said.

Because of staffing, Rosencrans said he and Peterson can only go as far as requiring landlords to board up vacant and empty buildings. But there are signs the city plans to step up its efforts in the coming year. Falsey, the city manager, said the city is dedicating $200,000 this year to cleaning up blighted properties. Officials are making a plan for spending that money now, Falsey said.

Options for tougher next steps include fines or even a lien on the property, which can lead to foreclosure proceedings, Falsey said.

At an Airport Heights Community Council meeting Thursday night, neighbors talked with police and city officials about what to do with the abandoned buildings in their neighborhood. Helen Howarth, one of the writers of the letter to Berkowitz, said her grown-up son has only ever known the properties looking that way.

Howarth said she and others want to see even stronger city regulations with clear timetables for action. The neighborhood needs the homes, she said.

"We have existing housing that could potentially be brought back into the housing mix," Howarth said. "But for whatever reason, it isn't."

If there's an abandoned or empty building in your neighborhood, report it to the city's building safety department by calling 907-343-8301. The latest version of the vacant and abandoned building registry can be found on the city webpage for the code abatement enforcement department.