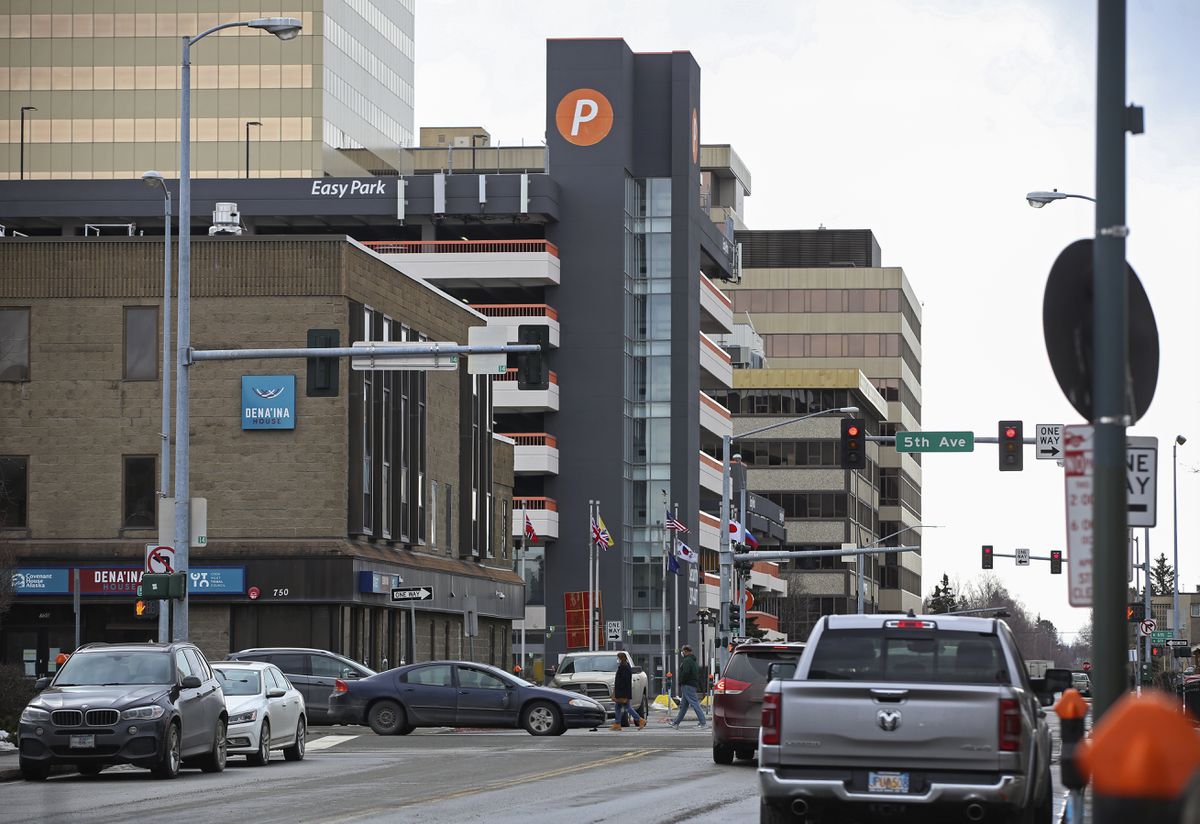 The Anchorage agency that runs public parking garages downtown and is pursuing several major projects is set to run out of money this summer, the former director warned in a recent letter to the acting mayor.

Seeking “immediate relief,” Andrew Halcro proposed in the March 4 letter that the city lend the agency $3.8 million to keep it afloat. Halcro resigned from the Anchorage Community Development Authority three weeks after writing the letter.

In the four-page letter to Acting Mayor Austin Quinn-Davidson, Halcro wrote that without a loan, the agency will have “no other avenues to survival” except selling assets, such as its building at 716 W. 4th Ave. housing the Anchorage Police Department.

The letter paints a desperate economic picture of the agency, with more urgency and detail than Halcro’s two-page resignation letter sent on March 26.

Melinda Gant, the agency’s acting executive director, said in an interview that the most current figures show the agency is on pace to run out of money and cash reserves at the end of July.

“We are in a very dire situation,” she said.

Halcro provided his March 4 letter at the request of the Anchorage Daily News.

In it, Halcro wrote that the agency has lost large amounts of parking revenue — typically the agency’s primary revenue source — as COVID-19 shuttered downtown activities for the last year.

Halcro also asserted that broken promises from City Hall about financial support have helped push the agency “to (the) brink” of going broke. Those assurances, Halcro wrote, led the agency to make financial commitments to private-sector partners, creating uncertainty for the agency’s projects.

“I think it was one of those things where we weren’t communicating as well as we could have about the challenges and how we could find a solution,” Bockenstedt said. “I think we are doing that now and are on a path to solving some of the challenges raised in the letter.”

“These are all projects from the administration’s perspective that we believe in,” Bockenstedt said.

The city is also looking for ways to help ACDA, Bockenstedt said.

One possible source of money is federal COVID-19 aid, he said.

So far, the authority, a quasi-governmental agency, has not received pandemic-related relief grants or loans.

Last August, it became clear the agency was on track to run out of money within 11 months, Halcro wrote in the letter.

The city did not provide financial help, Halcro said in the letter to Quinn-Davidson.

“Two weeks ago we were notified by City Hall the long promised relief was not coming,” Halcro wrote. “This is why we find ourselves on your doorstep at the eleventh hour asking for a lifeline.”

The agency’s cash reserves of $2.6 million before the pandemic dropped below $500,000 by the time he wrote his letter, he wrote.

Halcro also said in the letter that in the last year, some tenants have left the authority’s retail space beneath its Fifth Avenue parking garage.

ACDA operates four parking garages downtown and provides other parking services, through its EasyPark operation. It has cut staff from 49 to 22, Gant said.

“It doesn’t matter if there are 10 cars or 810 cars in a garage, the facilities still cost the same to operate and repair and they never close which means there is not a minute of the day when my organization isn’t spending money on cleaning, securing or repairing these public facilities,” he wrote.

A $1.8 million commitment that ‘poses a significant problem’

Halcro’s letter also expressed frustrations with City Hall, stemming in part from an unsolicited offer in January 2020, from a prospective buyer he does not name, for the purchase of the police building.

The authority wanted to accept the offer to recapitalize the agency, to the tune of $7 million, Halcro wrote.

The authority pitched the idea to former Mayor Ethan Berkowitz.

The answer was no, according to the letter. That was based on concerns that lease expenses for the police department would be too high if the authority sold the building to another owner, Halcro said in an interview.

But the idea was floated that the city would buy out the authority’s equity in the police building, at $5.7 million, as part of a deal that would eventually give the city ownership of the building for $1, according to the letter. The city could use proceeds from the $1 billion sale of Municipal Light & Power last year to support the proposal, ACDA records show.

For months, ACDA was told by City Hall officials that the financial help was coming, Halcro’s letter said.

City Hall officials encouraged the board to submit an offer for the planned $3.2 million acquisition of JC Penney’s garage and a stake in the Nordstrom building, Halcro wrote. That deal was announced in October.

Halcro also wrote that City Hall officials encouraged the authority to “proceed on finalizing” the Block 96 Flats Development in downtown Anchorage, at the corner of 8th Avenue and K Street. That $6.2 million development, led by Debenham Properties, seeks to build dozens of studio and one-bedroom apartments. It’s expected to create 60 jobs and add $200,000 annually to the city’s property tax base, Halcro wrote.

In that deal, the authority has committed to pay $1.8 million for the parking structure.

“ACDA’s board approved these projects based on the expressed commitment given by City Hall that relief was imminent.”

With financial support from the city uncertain, Halcro wrote that the authority’s planned purchase of the JC Penney garage and Nordstrom building can be delayed until the agency has the money.

“ACDA has already executed both the development and ground lease agreements,” so the authority has committed to providing the $1.8 million by the end of April, he wrote.

“Again, assurances were reconfirmed by City Hall just hours before I executed the final agreements that the money to fund this project would be available,” Halcro wrote.

Bockenstedt said the plan to provide $5.7 million in equity from the authority’s downtown building is not on the table at this time.

But a proposal now before the Anchorage Assembly seeks to raise $1.8 million to cover the authority’s commitment in the Block 96 project, Bockenstedt said.

The city would borrow money from a bank, using a city property as collateral, the proposal says. Proceeds from the ML&P sale would repay the debt.

Bockenstedt said the city is looking for ways to provide financial support for the authority’s operational budget, addressing daily expenses. The relief plans will need approval from the Anchorage Assembly, he said.

“We’re still trying to figure that piece out,” he said.