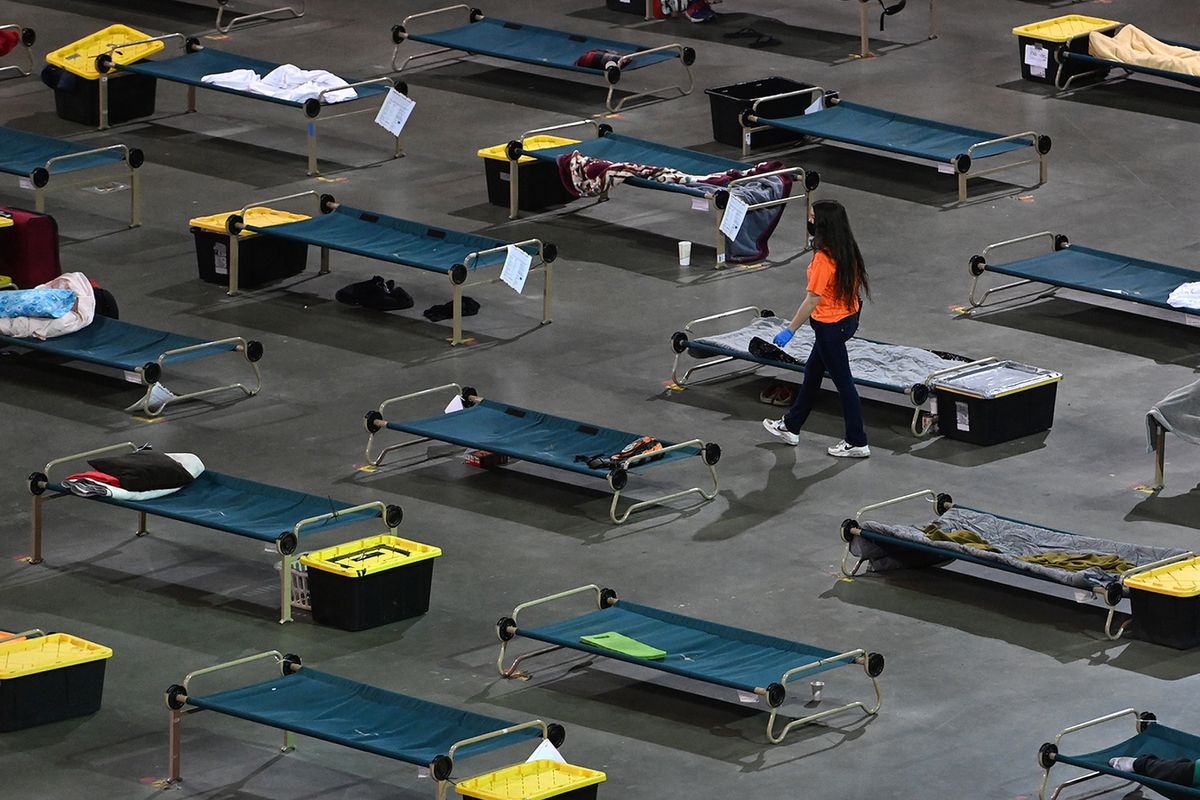 Cots on the floor of the Sullivan Arena where Bean's Cafe operates a mass shelter for homeless clients on Monday, July 19, 2021. (Bill Roth / ADN)

Cots on the floor of the Sullivan Arena where Bean's Cafe operates a mass shelter for homeless clients on Monday, July 19, 2021. (Bill Roth / ADN)

As city officials debate how to care for Anchorage’s homeless population this winter, new data from the Anchorage Coalition to End Homelessness estimates that the city will need to find an additional 465 beds — on top of its COVID-19 shelter programs already in place, including the mass care shelter at Sullivan Arena.

Without its mass care programs, the city would need to find shelter for about 1,229 people, according to the coalition’s data, which it presented on Wednesday to the Anchorage Assembly’s committee on housing and homelessness.

Anchorage is also housing people in a “non-congregate” program, which shelters up to about 350 people in hotel rooms. If it keeps that program and shuts down the Sullivan shelter, it would need to find 879 more beds, the coalition found.

The Assembly in March set out to end Sullivan Arena’s use as a shelter, which has room for up to 400 people, by the end of September. It’s not yet clear if the city will instead keep the shelter open, though three Assembly members in a recent letter to Mayor Dave Bronson asked him to consider that option.

The coalition also estimated that with the mass care programs in place, the city’s need for shelter beds are virtually met during the summer, as demand for shelter is less during summer months.

[How much longer will Sullivan Arena be a mass homeless shelter? The uncertainty is ‘stressful for everyone.’]

The city stood up its mass care programs during the pandemic as temporary measures in response to the public health crisis and federal Centers for Disease Control and Prevention recommendations, which meant that the city’s privately run shelters had to dramatically decrease the number of people sheltered each night. At the same time, more people began falling into homelessness.

It was a “one-two punch,” said Bob Doehl, the city’s director of Development Services, which oversees the mass care shelter.

Between July 2020 and June 2021, 551 people became homeless who had not been previously, according to the coalition’s data.

Bronson has proposed building a temporary mass shelter in East Anchorage to house about 450 people and expand to house about 1,000 if needed. The Assembly last week refused to move forward with his plan, citing rising costs and a difficult timeline.

Bronson also refused to move ahead with the purchase of the former Alaska Club in Midtown for a city-owned shelter for up to 150 people, a deal which previous Acting Mayor Austin Quinn-Davidson had set up as part of a plan to stand down the Sullivan shelter.

[An Anchorage anesthesiologist is in charge of a plan to reimagine homeless shelters in the city. Who is he, and how’d he get here?]

Now, with no plan currently in place, city officials are trying to reach a compromise about what to do next. All agree they must find and implement a solution for winter shelter before freezing weather hits.

The delta variant, the most contagious strain of COVID-19 that is now considered the dominant strain in Alaska, may also have an impact on how the city will choose to move forward.

Private shelter providers such as the Brother Francis Shelter had considered restoring some of their shelter capacity as the pandemic eased, but coronavirus cases are rising again and the CDC is still requiring 6 feet of space between clients in shelters.

“The delta variant was kind of a left hook on top of that one-two punch, where there was interest in expanding capacity. It’s created a pause on those efforts,” Doehl said.

Jasmine Boyle, executive director of the coalition, told the Assembly committee on Wednesday that they are trying to find other ways to help providers increase capacity, such as bunk beds or dividers.

Assembly member Chris Constant, vice chair of the homelessness and housing committee, said the city still needs to survey the capacities that might be available at shelters. The Assembly also has directed money toward housing programs that could help ease the need.

Still, the delta variant could mean the city’s COVID-19 mass shelter response will need to remain in place.

“We definitely have to keep our eyes on that, because that does change everything, which again argues for continued mass shelter if we can’t get to capacity because COVID is continuing to hammer us,” Constant said.

City officials expect to be reimbursed by FEMA for the costs of the mass shelter, as well as hotel rooms for shelter and quarantine, which currently run more than $3 million a month, according to Doehl.

Dr. John Morris, Bronson’s homeless coordinator, said he was not surprised by the coalition’s estimate of the needed for shelter space this winter.

“That’s why we came out with with a with a plan that says this shelter might hold 450 people and have the capacity to flex up in the in the winter when you need it,” he said.