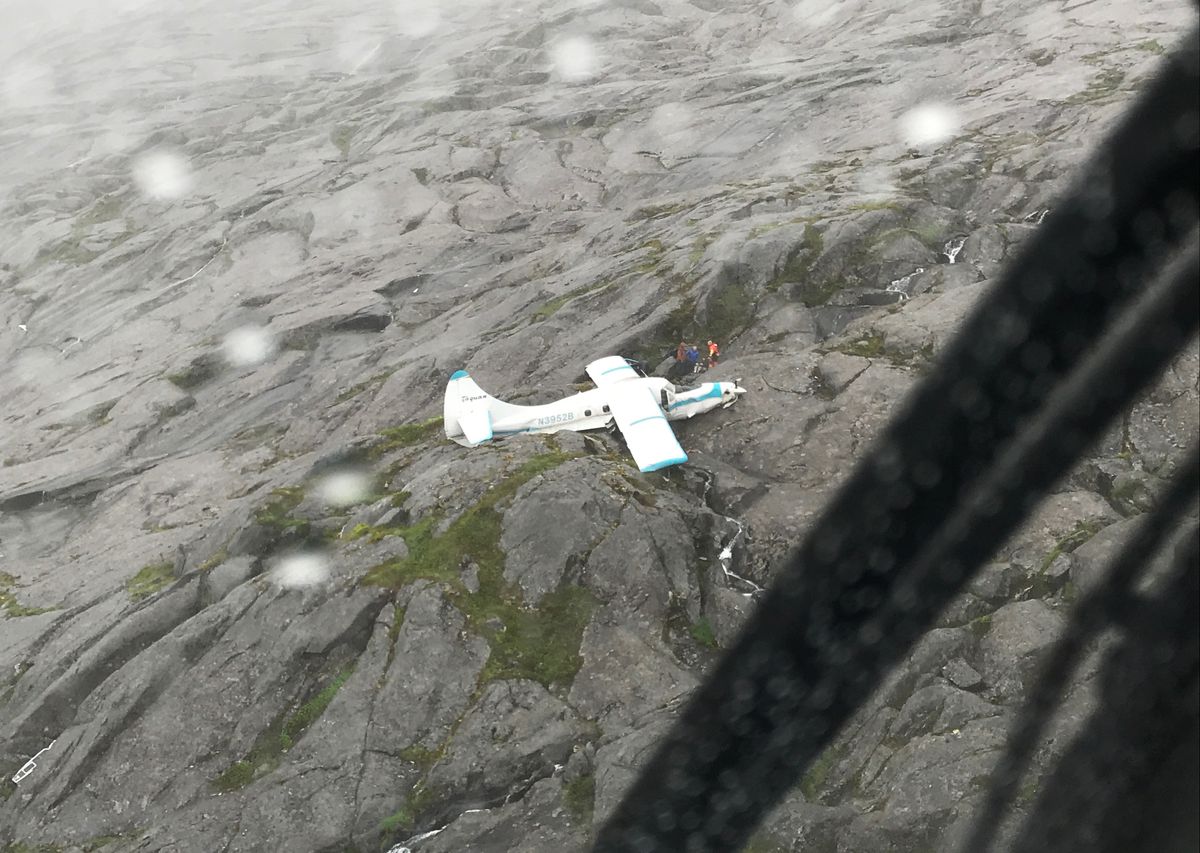 Back in July 2018, a passenger on a flightseeing plane that had just left a Prince of Wales Island lodge folded his arms so he wouldn’t try to grab the controls from the pilot next to him.

Heavy rain and clouds descended around the floatplane as it threaded through steep peaks and fjords en route to Ketchikan.

The passenger, who’d taken a few flight lessons, later said he kept thinking the pilot must have a plan. He spotted a plane sitting on the water near a resort, as if its pilot had landed to get out of the weather.

Then the Taquan Air de Havilland Otter smashed into the side of Mount Jumbo.

Remarkably, all 11 people aboard survived, though six passengers were seriously hurt and four reported minor injuries.

Now a new National Transportation Safety Board report that includes passenger interviews also notes that the Federal Aviation Administration allowed Taquan to keep an operations director who was at times too busy to oversee flight safety because another aviation job took him out of Ketchikan.

The report, which includes links to hundreds of pages of documents, is basically “a factual data dump” of everything the NTSB team discovered during the investigation, said Clint Johnson, the agency’s Alaska chief.

“One of the areas we look at is FAA oversight,” Johnson said.

An FAA spokesman said Thursday the agency was just seeing the report and couldn’t immediately respond to questions.

Pilot Mike Hudgins, 71 at the time, picked up his passengers and headed to Ketchikan before 8 a.m. that day. Passengers said foggy weather apparently delayed the flight that was supposed to leave at 6:30 a.m.

Another pilot reported a mountain portage as “wide open” and Hudgins described steering away from rainy skies and spotting good visibility ahead, according to the report. Navigating through mountains at about 1,100 feet altitude, he told investigators that visibility suddenly dropped.

Turning back toward Hydaburg, Hudgins spotted what he thought was water for landing below but realized too late it was snow, he said. He saw the mountain in front of him and pulled up into an emergency climb. The plane stalled and dropped onto the rocky slope, slamming into boulders at 75 mph.

The near-tragedy was reminiscent of the 2015 crash of a Promech Air flightseeing plane that killed the pilot and eight cruise-ship passengers aboard. Both floatplane pilots got disoriented in low-visibility weather that can arise quickly in Southeast Alaska, where tourists and residents alike rely on air service.

Hudgins wasn’t using a warning system meant to prevent sudden collisions with terrain. Like many pilots, he’d switched it off to avoid the constant alerts that he was flying too low as he cruised beneath the cloud ceiling.

That was another similarity to the Promech crash, in which the “terrain awareness and warning system” was also switched off. The NTSB in 2017 recommended FAA find ways to modify the devices for low-flying single-engine charters.

The plane crashed on its belly, wings drooping but with little front-end damage. Rescuers hoisted everyone aboard to a landing area, then flew them to Ketchikan.

Taquan was operating about 60 flights a day at the time, with a director of operations who had moved to Anchorage after getting the chief pilot job at Grant Aviation, a larger operator of commuter flights, according to the report released Thursday by the National Transportation Safety Board.

The operations director is responsible for making sure policies are followed. Taquan did not have a director of safety.

Working for two such carriers at the same time is prohibited by FAA regulations that bar managers for commuter services from also working for other carriers.

The operations director said FAA inspectors for Grant and Taquan both knew he worked at the two companies, according to the report. He had resigned from Taquan but agreed to stay on when they couldn’t find a replacement.

“My understanding was, it’s much better to have you in that position doing what you do rather than have nobody in that position. And that was the FAA’s position,” he said in an interview with federal investigators.

But one FAA maintenance inspector based in Ketchikan said she warned managers she had concerns about the dual jobs, given the size of Taquan’s operation and the director’s integral role in operations the summer before. Taquan had told the agency it was adding two Otters to its fleet.

“That’s another 20 people being moved each round ... of flights,” she said in an interview with investigators. "So that’s increased risk, increased operation, increased number of people. I think that was part of the conversation, if I remember right.”

She heard nothing in the way of follow-up, the inspector told the investigators.

The FAA office in Juneau at the time was struggling to hire inspectors, officials told NTSB. A manager described job candidates laughing at the salary.

The report describes Taquan’s FAA inspector as overwhelmed, assigned to oversee 33 federally regulated air services. The inspector started in that position about three months before the crash and described “very little conversation” with the prior inspector about the operations he’d oversee.

The FAA approval on Taquan’s training program was expired but the inspector didn’t realize that, federal investigators learned.

The federal safety investigators found that lower-level flight coordinators were making operational decisions -- like whether to fly -- in the absence of the Anchorage-based director.

The coordinators also filled out preflight forms weighing various risks including turbulence, the pilot’s condition, and the weather at the time of the trip. Pilots interviewed by investigators said they never changed the form based on their own observations.

“One pilot viewed the form as ‘just a piece of paper with some ink on it’ and based go/no go decisions on his experience and research instead,” lead investigator Brice Banning wrote in a summary.

The risk reports used numerical scores to weigh the dangers of any particular flight. Taquan considered anything under 20 relatively routine.

Still, the crash flight’s score of 13 -- based on distance from Ketchikan and several other factors, none of them weather -- was high enough to fall into a “caution” zone that required manager involvement. The flight coordinator, pilot and chief pilot signed off.

Several pilots praised Taquan’s positive safety culture and conservative decision making when it came to canceling flights, according to the report, which also criticizes the now-defunct Medallion Foundation for failing to require air carriers to incorporate Medallion safety materials into federally approved manuals.

Hudgins lived in Key West, Florida, when he wasn’t in Ketchikan. He had logged more than 26,700 total flight hours at the time of the crash, according to the report. He had 2,700 hours of time flying in Alaska.

A Taquan representative last year said Hudgins was no longer flying for the air service.