Eagle River man says he was high on meth when he shot up neighborhood, charges say 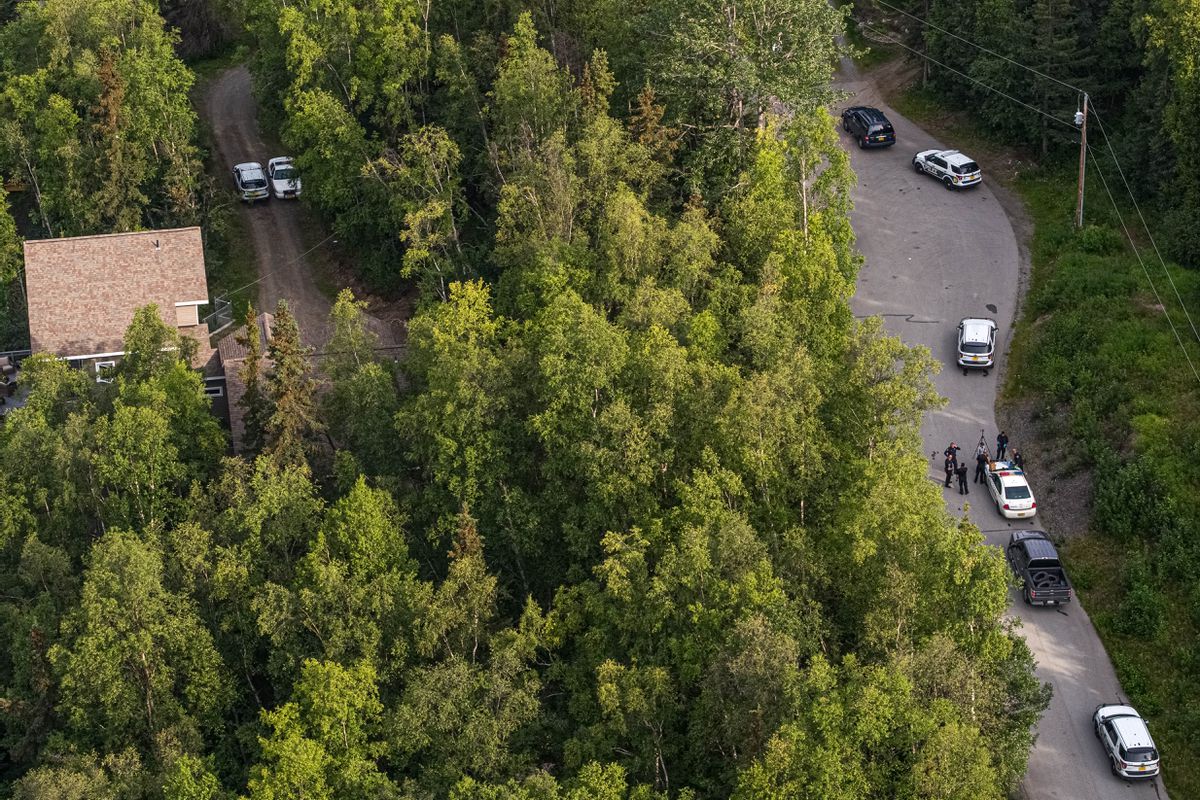 An Eagle River man told investigators he was high on methamphetamine when he went on a shooting rampage through his neighborhood early Thursday morning.

Todd Driskill, 57, fired at officers as they approached him and was subsequently wounded by an Anchorage police officer’s returned gunfire, according to charging documents.

Driskill was arrested on several charges of assault and misconduct involving a weapon, although police said in an online statement that more charges may be filed.

Multiple neighbors called 911 just before 6:20 a.m. on Thursday as shots began ringing out near the 11200 block of Steeple Drive, a winding road with large lots on the outskirts of Eagle River, charges said.

The first caller reported she thought at least 10 shots were fired into her home, according to the charges filed against Driskill. She told dispatchers she and her husband were hiding in their bathroom, but she believed he may have been injured by the gunfire. The man was later brought to the hospital and treated for injuries on his abdomen and leg caused by a shrapnel fragment, the charges said.

More neighbors reported that a man, later identified as Driskill, was actively shooting outside throughout the neighborhood. One neighbor confronted Driskill, who reportedly said he’d already shot two people, according to the charges. Driskill walked toward his home at 11330 Steeple Drive while pumping a shotgun, charges said.

The first officers arrived in the neighborhood eight minutes after the first call for help was placed, charges said. Officers were directed toward Driskill’s home, where neighbors said he was firing shots from his rooftop, the charges said.

Officers said Driskill fired a semi-automatic weapon in their direction and officer Kevin Mitchell returned fire, injuring Driskill. No officers were injured. Driskill was brought to a hospital and treated “for several small puncture wounds on his right thigh which were consistent with a shrapnel or fragment injury,” the charges said.

He was interviewed by detectives later that day and said he’d used methamphetamine hours before the shooting spree, charges said.

“Driskill stated that he was seeing things, which he knew now were not real,” the charges said.

He told investigators he was seeing holograms of people, which were “getting upset at him and he was later playing games with them, which is why he was shooting his rifle,” charges said.

He told officers he shot into his neighbors’ houses because he was convinced they were “shining lights and looking into his home,” according to the charges.

Anchorage Police Chief Justin Doll praised the quick response from officers during a news conference Thursday. He said a mix of on- and off-duty officers responded to the call while they were on their way to work.

Driskill was employed as an operations manager at Doyon Drilling. His position at the company was terminated following the shooting, according to a statement from Doyon Drilling.

“Doyon is aware that the Anchorage Police Department has arraigned a Doyon Drilling employee on charges stemming to the disturbance in Eagle River on Thursday, July 30th,” Sarah Obed, senior vice president of external affairs at Doyon Drilling, wrote over email. “Doyon Drilling terminated this employee on Friday, July 31st. We are saddened by last Thursday’s events and our thoughts are with all who have been impacted.”

Officer Mitchell was placed on four days of administrative leave following the shooting, as is standard protocol. The Office of Special Prosecutions will determine if his use of force was justified. Mitchell has been with the department since 1993.

This was the fourth officer-involved shooting of 2020 in the Municipality of Anchorage. In January, Dustin Folse was injured after police said he aimed a crossbow at officers. An officer fired at Logan Parrigan, but didn’t hit him, outside the Northway Mall in February. Officers fatally shot 16-year-old Daelyn Polu after police said he fired at officers during a traffic stop in February.

[43 people have been killed by Alaska law enforcement officers in the last five and a half years. Here’s what we learned by examining each case.]