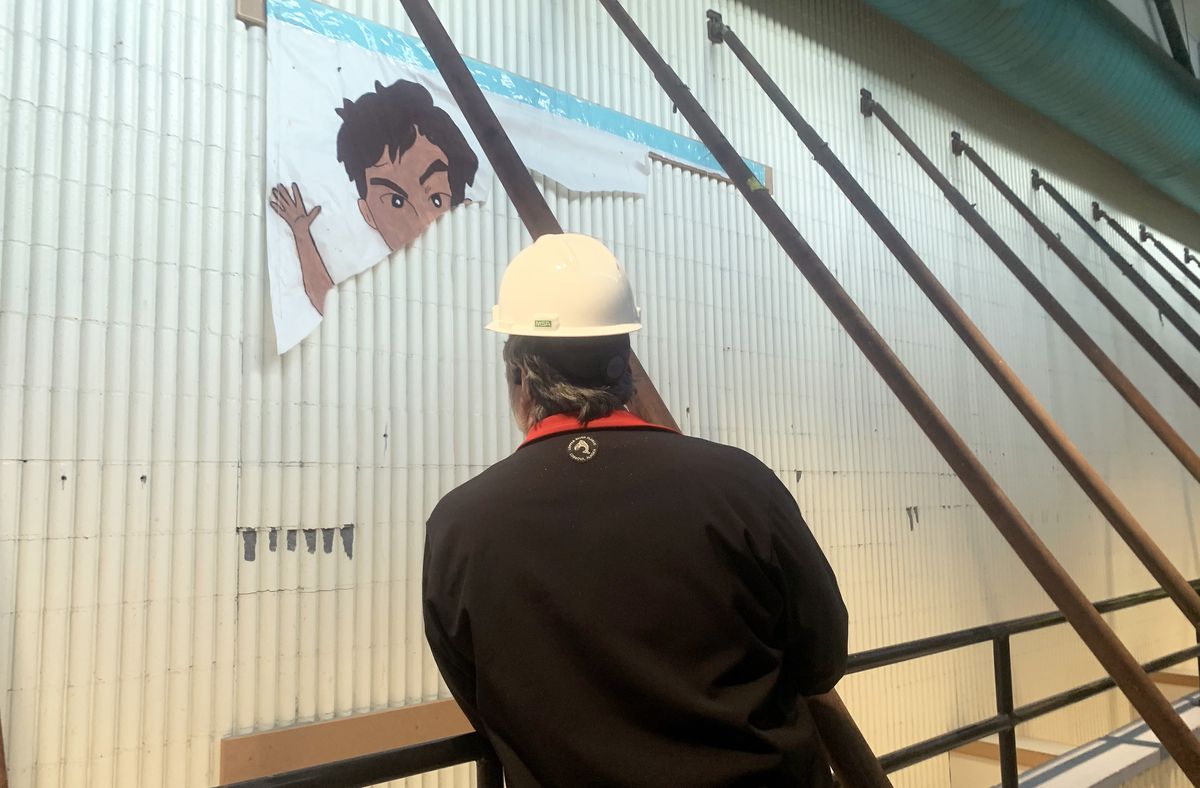 Anchorage School Board member Andy Holleman looks at a damaged section of wall at Gruening Middle School during a walk-through of the school held for community members on Thursday, Dec. 19, 2019 in Eagle River. School district officials and engineers conducted a tour of the building to show areas in need of repair and detail upgrades that will be made to the facility, which was damaged in the Nov. 30, 2018 earthquake. (Matt Tunseth / ADN)

Anchorage School Board member Andy Holleman looks at a damaged section of wall at Gruening Middle School during a walk-through of the school held for community members on Thursday, Dec. 19, 2019 in Eagle River. School district officials and engineers conducted a tour of the building to show areas in need of repair and detail upgrades that will be made to the facility, which was damaged in the Nov. 30, 2018 earthquake. (Matt Tunseth / ADN)

Negotiations between the Anchorage School District and the federal government over funding for damage sustained by Anchorage schools in the November 2018 earthquake could take months or years and may result in the district turning down millions in disaster relief funds.

The biggest sticking point is insurance. According to ASD Chief Operating Officer Tom Roth, the Federal Emergency Management Agency (FEMA) wants to require the district to carry earthquake insurance “in perpetuity” if it accepts federal reimbursement for certain repairs.

“There are strings attached,” Roth said Wednesday at the Chugiak-Eagle River Chamber of Commerce biweekly lunch forum at the Matanuska Brewing Company in Eagle River.

Roth explained there are different categories of federal disaster reimbursement, each with different sets of federal requirements. For cleanup of damage and debris in the immediate aftermath of a quake, along with immediate repairs, there are few “strings” attached to federal money. But for longer-term repair work, FEMA requires the district to carry expensive earthquake insurance — something officials aren’t sure they want to do.

ASD believes it’s eligible for about $6 million in funding in the first two categories. But Roth said approximately $54 million in long-term repairs would come with “strings attached.”

“You take that money from the federal government, you incur an obligation to obtain and maintain earthquake insurance in perpetuity,” he told the chamber.

Roth told the chamber the district has received quotes and believes a $10 million earthquake insurance policy would cost about $1.8 million per year for the life of the facilities. With that in mind, the district must weigh whether taking the federal money is worth the added expense of carrying the insurance.

“We have a business decision,” he said.

“It almost outprices itself,” she said.

There’s a chance the district could get a waiver on the insurance requirement from the federal government, but that would take a request to FEMA by the state Division of Insurance, and there’s no guarantee such a waiver would be granted.

Officials are currently weighing all their options. Thus far, Roth said the primary focus has been on maximizing the amount of work that can be eligible for disaster reimbursement, something the district has worked closely with FEMA on to ensure federal guidelines are met.

How to pay for earthquake damage has been the biggest issue facing the district since the magnitude 7.1 quake struck on the morning of Nov. 30, 2018.

The district hopes to fund much of the work with an $83 million school bond that will go before voters in April. The bond includes $70 million in earthquake-related repairs, including $39.3 million for Gruening, $11 million for East High at $4.5 million for Eagle River Elementary.

Bishop told the chamber the bond is a two-year ask, and noted that the district will retire $112 million in bond debt over that time frame.

“We’re asking for $30 million less than we are retiring,” she said.

There’s an expectation some of that money will be recouped through federal and state disaster funding, but Roth said exactly how much remains unknown and will depend in large part on what happens with the insurance question.

Gruening students have been attending classes at Chugiak High since the quake, while Eagle River Elementary students have been split between several Eagle River-area schools. But the solution is only temporary, and Roth said the district hopes to have both schools up and running by the 2021-22 school year.

If the bond doesn’t pass, Bishop said the district would be in “a pickle,” and would likely have to explore other options, including busing students to Anchorage or housing all area middle-schoolers at Mirror Lake Middle School in Chugiak.

The insurance issue isn’t the only thing complicating negotiations over disaster relief funding. At its next meeting, the Anchorage School Board will vote on whether to suspend an ASD policy that requires the use of 15 percent apprentice labor on all ASD projects of $100,000 or more. Apprentices are young tradespeople who are paid while learning their craft under more experienced workers.

According to district staff, the district’s FEMA Procurement Disaster Assistance Team determined the policy could run afoul of federal procurement guidelines due to concerns over “full and open competition.” District lawyers agreed, saying the provision could jeopardize federal reimbursement.

“I think it’s very clear applying apprenticeship standards will not exclude the school district from receiving FEMA money,” Fields told the board.

Alaska AFL-CIO Director of Operations Joelle Hall also objected to suspending the policy. She said other areas of the country have managed to receive federal funding without cutting apprentices loose.

“If everyone else can figure out how, I’m pretty sure you all can too,” she said.

ASD spokesman Alan Brown said the intent of asking the board to suspend the policy is to make sure the district is doing everything it can to follow the federal guidelines closely in order to maximize the amount of federal disaster money that can be received.

“It has to be done extremely deliberately and carefully,” he said.

The board will decide on the apprenticeship requirement issue at its Jan. 21 meeting.