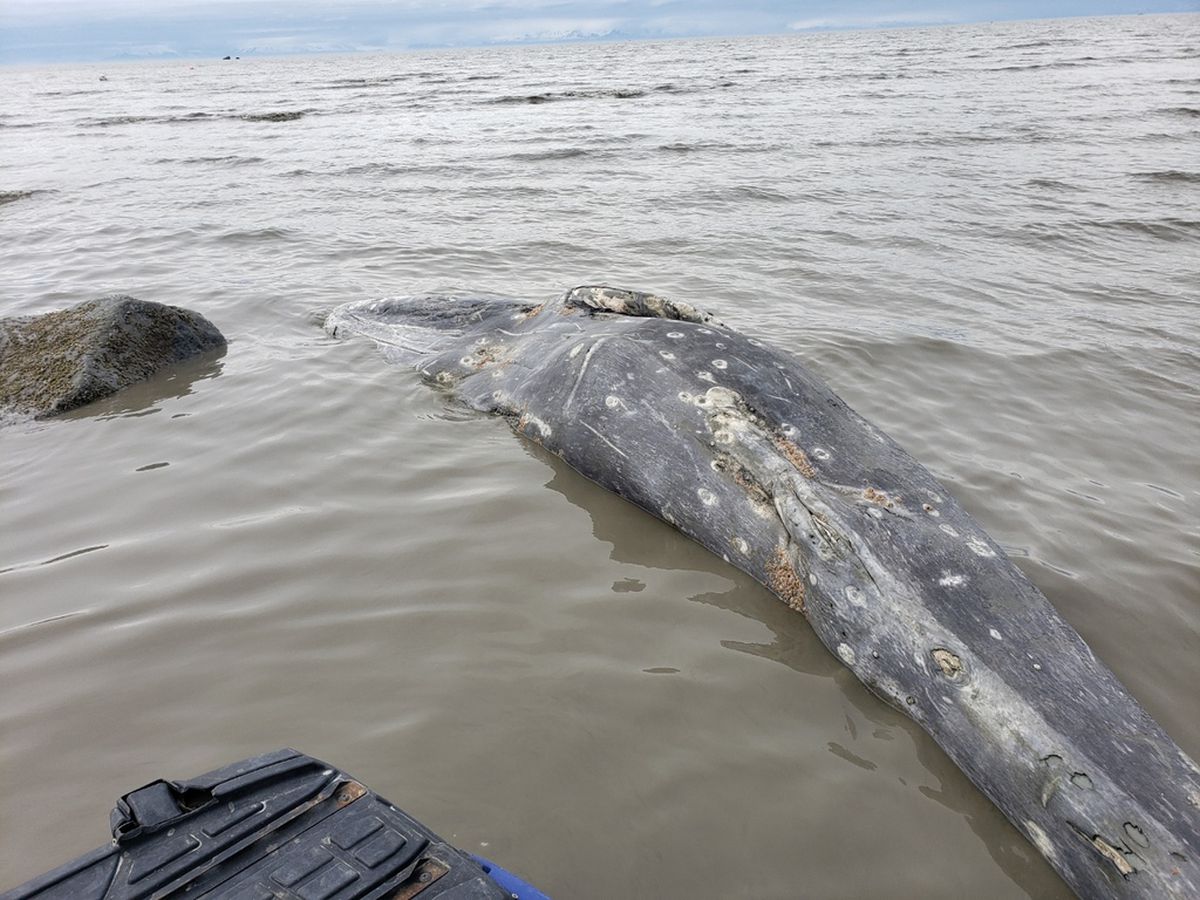 A young, male gray whale was spotted dead May, 24, 2019 on the shore of the eastern Kenai Peninsula near Clam Gulch. It was the fourth gray whale to wash up along Alaska's coastlines in about a month. (Photo by NOAA.)

A young, male gray whale was spotted dead May, 24, 2019 on the shore of the eastern Kenai Peninsula near Clam Gulch. It was the fourth gray whale to wash up along Alaska's coastlines in about a month. (Photo by NOAA.)

A gray whale has been found dead on the coast of the Kenai Peninsula near Clam Gulch, the fourth to wash up in Alaska so far this year.

A team of marine mammal biologists from the National Oceanic and Atmospheric Administration arrived Monday to conduct a necropsy on the whale, which was first spotted May 22 by a family fishing nearby for herring, said Julie Speegle, a spokeswoman for NOAA Fisheries Alaska Region.

The tide hasn’t yet abated enough to allow access to the whale, which Speegle said is only visible at low tide. Biologists believe it is a young male, she said.

The whale’s death is the latest in a rash of strandings reported this month across Southcentral Alaska’s shores. Another gray whale was found dead on the coast of Kodiak Island last week, and two more were spotted beached near Cordova and along Turnagain Arm before that.

Biologists were able to conduct necropsies on the Cordova and Turnagain Arm whales, but the results of those examinations haven’t been completed yet, Speegle said.

Gray whales make a 10,000-mile round-trip migration each year, according to NOAA,. They’ve been spotted this year along the length of the Alaska coast, likely as far north as the Arctic, Speegle said.

NOAA says an unusually high number of gray whales migrating to Alaska have washed up along the West Coast this year, many of which died of starvation.

John Calambokidis, a research biologist at Cascadia Research in Olympia, Washington, said the gray whale population has likely reached carrying capacity, meaning the number of individuals the ocean can support with the available food supply.

Gray whales migrate north to the Arctic in the winter to feed, and fast during the winter after they’ve migrated back south. Some whales may not have gotten enough to eat during last year’s summer period, Calambokidis said.

It’s unknown at this point whether climate change may have contributed to the changing food supply, he said, though it doesn’t appear likely that other human activities, like pollution, are to blame.

A similar event happened between 1999 and 2000, he noted. Two hundred and twenty-two cumulative gray whale deaths were documented in those two years, compared to 87 between 2017 and 2018.

A few of the whales that have washed up in Alaska have also shown signs of malnutrition, Speegle said. She called the Clam Gulch whale “markedly thin,” and said the veterinarian who examined the Turnagain Arm whale described that animal as “skinny."

The Cordova whale, Speegle said, “was in average to poor body condition.” Biologists weren’t able to reach the Kodiak Island whale to conduct a necropsy, so its body condition is unknown.

Alaska typically sees between zero and three dead whale strandings by the end of the May, so this year’s count is “pretty much in the normal range, maybe just slightly above,” Speegle said.

However, most gray whale deaths go undocumented, according to Calambokidis, either because they sink rather than washing up or because they wash up in remote locations. He estimated that the whales that are found dead represent only 10 percent of deaths.

That’s a particular challenge in Alaska, where much of the coastline is uninhabited, he said.

In the case of the whales that do turn up in populated areas, the NOAA cautioned against touching or disturbing them. The agency warned the whales may carry diseases, lice or toxins from harmful algal blooms. The carcasses can also attract predators like bears.