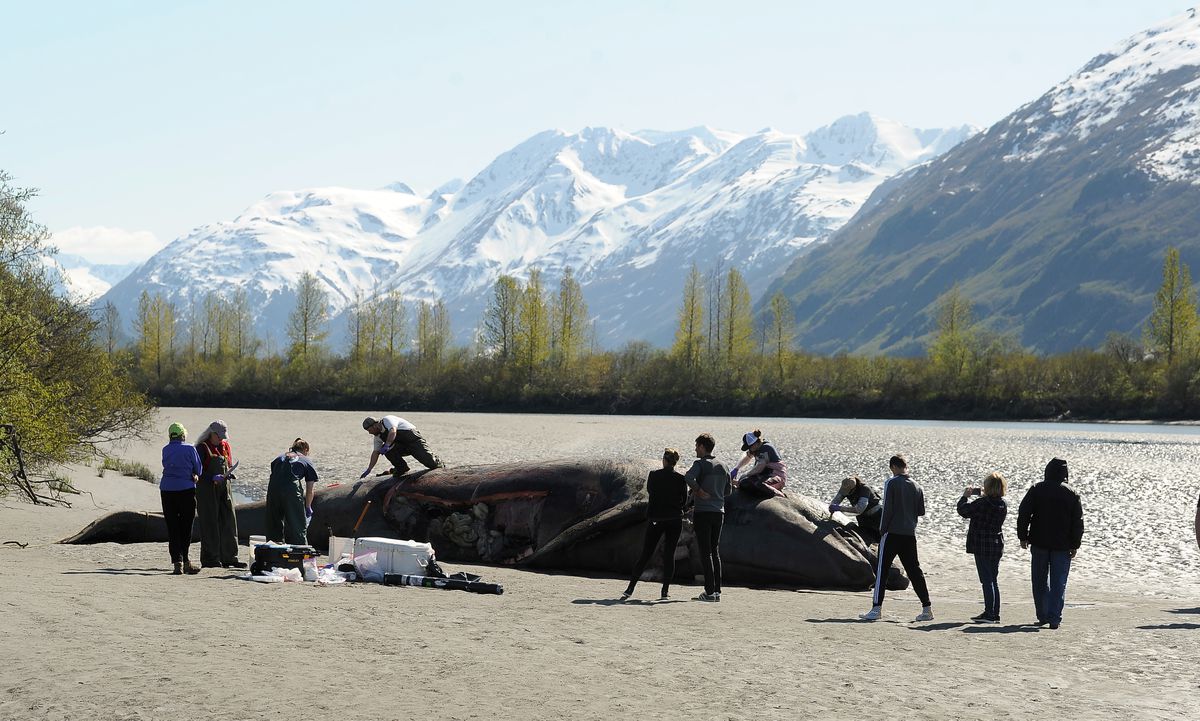 Kathy Burek Huntington, with Alaska Veterinary Pathology Services, UAA grad students and Barbara Mahoney, with the National Marine Fisheries Service take samples from a dead gray whale washed up on the mud at Placer River at the head of Turnagain Arm on Tuesday May 21, 2019. (Photo by Bob Hallinen)

Kathy Burek Huntington, with Alaska Veterinary Pathology Services, UAA grad students and Barbara Mahoney, with the National Marine Fisheries Service take samples from a dead gray whale washed up on the mud at Placer River at the head of Turnagain Arm on Tuesday May 21, 2019. (Photo by Bob Hallinen)

A spike in the number of gray whales washing ashore dead on the West Coast this year, including Alaska, prompted federal officials on Friday to declare an “unusual mortality event,” triggering an investigation into the cause of the die-off.

So far this year, at least 70 gray whales have been spotted dead on the shores of California, Oregon, Washington and Alaska, many of them appeared malnourished, according to the National Oceanic and Atmospheric Administration.

It’s the most gray whale deaths recorded in one year since 2000, when there were 131. Between 2001 and 2018, the total number of recorded gray whale strandings averaged about 29 a year, according to NOAA Fisheries data.

In Alaska, five dead gray whales have washed up along coastlines so far this year, more than the usual zero to three by late May, said Julie Speegle, a spokeswoman for NOAA Fisheries Alaska Region.

The most recent gray whale carcass was spotted in Chignik Bay on the southern side of the Alaska Peninsula last Saturday. Before its death, the whale was seen alive in what Speegle called an “unusual location under the community’s dock.” Its cause of death was not immediately known.

Four other gray whales have washed up dead along Alaska’s coasts this spring in Turnagain Arm, along Cook Inlet at Clam Gulch, near Cordova and on the coast of Kodiak Island. At least three of the five have shown some signs of malnutrition, Speegle said.

But whales are still migrating off Alaska’s coasts, and Speegle said: “We’re sort of bracing ourselves for the additional gray whale strandings."

In 2000, the last time NOAA declared an “unusual mortality event” for the whales, Alaska had 45 strandings.

The declaration of an “unusual mortality event,” under the Marine Mammal Protection Act, kicks off the formation of an investigative team of scientists and opens access to some additional funding. NOAA said the investigation into what’s causing the gray whale deaths could take months or even years.

The number of dead gray whales reported represents just a fraction of deaths, since many of the marine mammals, especially if they’re emaciated, will sink, said John Calambokidis of Cascadia Research in Olympia, Washington. Some may also wash up on remote areas of coastline.

Scientists said there doesn’t appear to be a trend in the age or sex of the whales washing ashore dead so far, they’ve ranged from calves to juveniles to adults, both male and female.

Gray whales are dying during their migration up the West Coast, as they head back to their Arctic feeding grounds.

The eastern North Pacific gray whale population, estimated at about 27,000, makes a 10,000 mile round trip migration every year. The whales feed during the summer in the Bering and Chukchi seas off Alaska, normally eating about 1.3 tons of food per day, according to the Alaska Department of Fish and Game. The whales rarely feed during winters off the coast of Mexico or while migrating.

Since several of the gray whales died of starvation, scientists, like Calambokidis, believe these whales may not have gotten enough to eat during their feeding period last summer in the Arctic seas.

The whales mostly eat tiny crustaceans such as amphipods from the ocean floor. It’s unknown at this point whether climate change, including warmer waters and reduced sea ice, may have contributed to changes in food supply, Calambokidis said.

“The Arctic is changing very, very quickly, and whales are going to have to adjust to that,” said Sue Moore, biological oceanographer at the University of Washington. “But gray whales are good at eating a variety of things, so it becomes a complex question very quickly.”

Calambokidis also theorized that it’s also possible the gray whale population has reached carrying capacity, meaning it has hit the number the ocean can support with the available food supply.

What’s unusual, he said, is how abrupt the die-off appears to be. In most cases where a population reaches carrying capacity, you would expect to see the population decline much more gradually, he said.

As part of this year’s investigation in Alaska, NOAA is planning to survey remote coasts by plane, searching for gray whales, Speegle said. They’ll start as early as next week and plan to go to Kodiak Island, up the Bering Strait and along the Prince William Sound.

NOAA is also asking anyone who spots a stranded or floating whale to call the Alaska Marine Mammal Stranding Network at 1-877-925-7773.