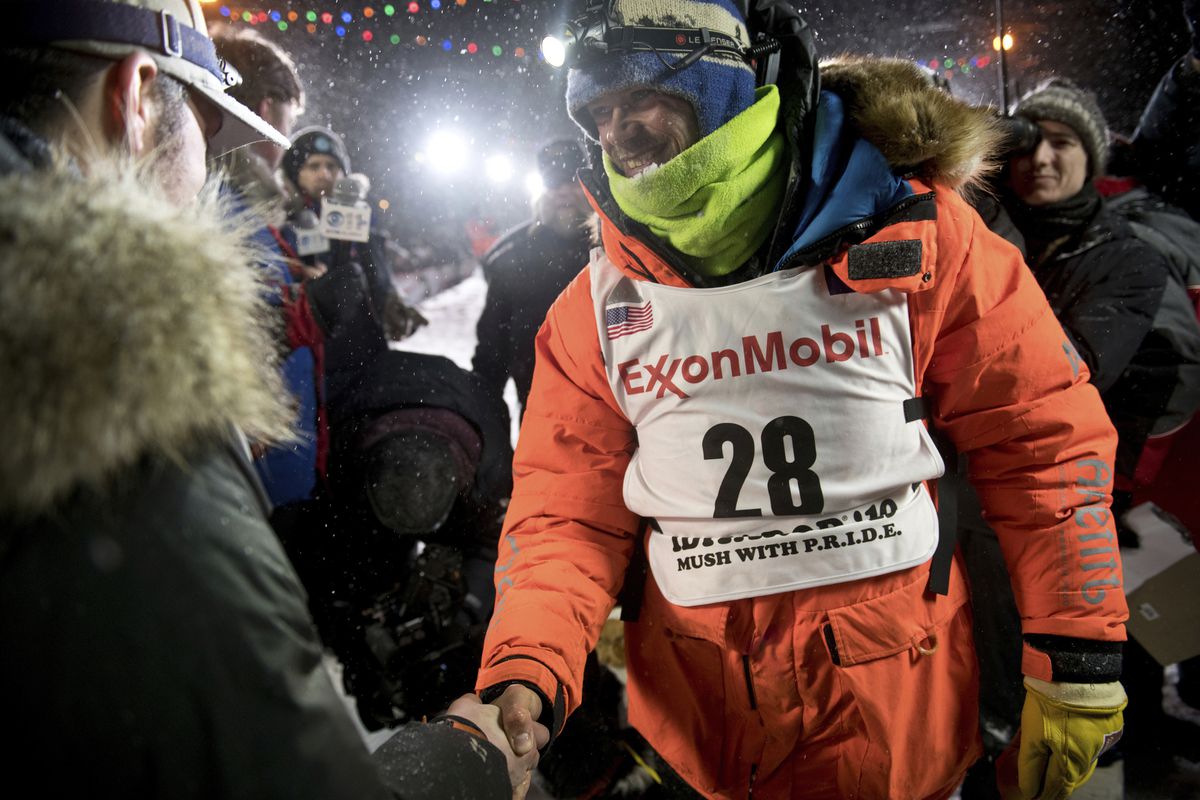 In this March 13, 2019, file photo, Joar Leifseth Ulsom, right, wearing a bib with ExxonMobil lettering on it, congratulates Peter Kaiser on his win in the Iditarod Trail Sled Dog Race in Nome. (Marc Lester / ADN archive)

In this March 13, 2019, file photo, Joar Leifseth Ulsom, right, wearing a bib with ExxonMobil lettering on it, congratulates Peter Kaiser on his win in the Iditarod Trail Sled Dog Race in Nome. (Marc Lester / ADN archive)

The Iditarod, the world’s most famous sled dog race, has lost another major sponsor as it prepares for a scaled back version of this year’s race because of the pandemic, officials said Thursday.

ExxonMobil confirmed to The Associated Press that the oil giant will drop its sponsorship of the Iditarod Trail Sled Dog Race. The move came after ExxonMobil, which has been a race sponsor since 1978, received pressure from one of its shareholders and the race’s biggest critic, People for the Ethical Treatment of Animals.

“After careful review of sponsorships in light of current economic conditions, we’ve decided to conclude our sponsorship of the Iditarod following the 2021 race,” ExxonMobil spokesperson Ashley Alemayehu said in an email to the AP.

“The health and safety of the dogs, and everyone involved in the event, has always been an important consideration for us,” Alemayehu said.

The Iditarod called ExxonMobil a “great partner” in the race as well as the Iditarod Education program, saying in a statement that, “After careful review of sponsorships in light of current economic conditions, they have decided to conclude their sponsorship of the Iditarod following the 2021 race.”

The loss amounts to $250,000, PETA said, but ExxonMobil could not immediately confirm the sponsorship amount. In 2009, ExxonMobil committed to giving the Iditarod $1.25 million over the ensuing five years.

“We’re glad that they have recognized that it’s absolutely bad for business when corporations support abusive industries and events like the Iditarod,” said Colleen O’Brien, a vice president for the animal rights group.

PETA has lobbied ExxonMobil to drop its major sponsorship of the race since 2007. In December, the organization submitted a shareholders resolution to “end all sponsorship of activities in which animals are used and abused and killed,” O’Brien said. PETA owns 102 shares of the company’s stock.

ExxonMobil executives met with PETA on a teleconference on Tuesday in which they confirmed they would end sponsorship. O’Brien said PETA then withdrew the resolution and canceled ExxonMobil-targeted ads it had planned to run on buses in Anchorage, in the Anchorage Daily News and the Texas edition of The Wall Street Journal leading up to the March 7 start of this year’s race.

PETA also called off planned protests for at least a dozen ExxonMobil locations around the country.

The animal rights group has been targeting national sponsors of the race to end what it sees as the abuse of dogs it says are forced to run the thousand-mile race.

The group claims more than 150 dogs have died since the race began in 1973. The Iditarod disputes the number but has not provided the AP with its count despite numerous requests over the years.

PETA last year took credit when Alaska Airlines and Chrysler, through an Anchorage dealership, dropped their sponsorships after PETA conducted protests at the airline’s corporate headquarters in Seattle and the carmaker’s in Detroit. At the time, neither company confirmed PETA’s protests played a role in their decisions.

Other national sponsors that have dropped out include Wells Fargo and Jack Daniel’s Tennessee Whiskey.

The loss of ExxonMobil leaves only one national sponsor of the race, Millennium Hotels and Resorts, through its Anchorage location, the Lakefront hotel. It also serves as the Iditarod’s headquarters during the race.

O’Brien said they will contact Millennium Hotels and Resorts and “urge them to sever their ties with the race before they’re targeted next. We’re not going to stop until dogs are no longer forced to race until they’re dead.”

The race’s other sponsors are Alaska-based businesses or those with close ties to the state.

The Iditarod normally starts in Willow, about 50 miles north of Anchorage, and takes mushers and their dogs nearly a thousand miles over rugged Alaska terrain to the finish line in Nome. However, this year’s race has been scaled back to about 860 miles and will start and end near Willow.

Twelve mushers, including defending champion Thomas Waerner of Norway, have dropped out of this year’s race, leaving 53 teams.

That’s among the three smallest fields in the last two decades, and all in the last three years. Last year, 57 teams started the race and 33 finished. In 2019, 52 teams began the race.