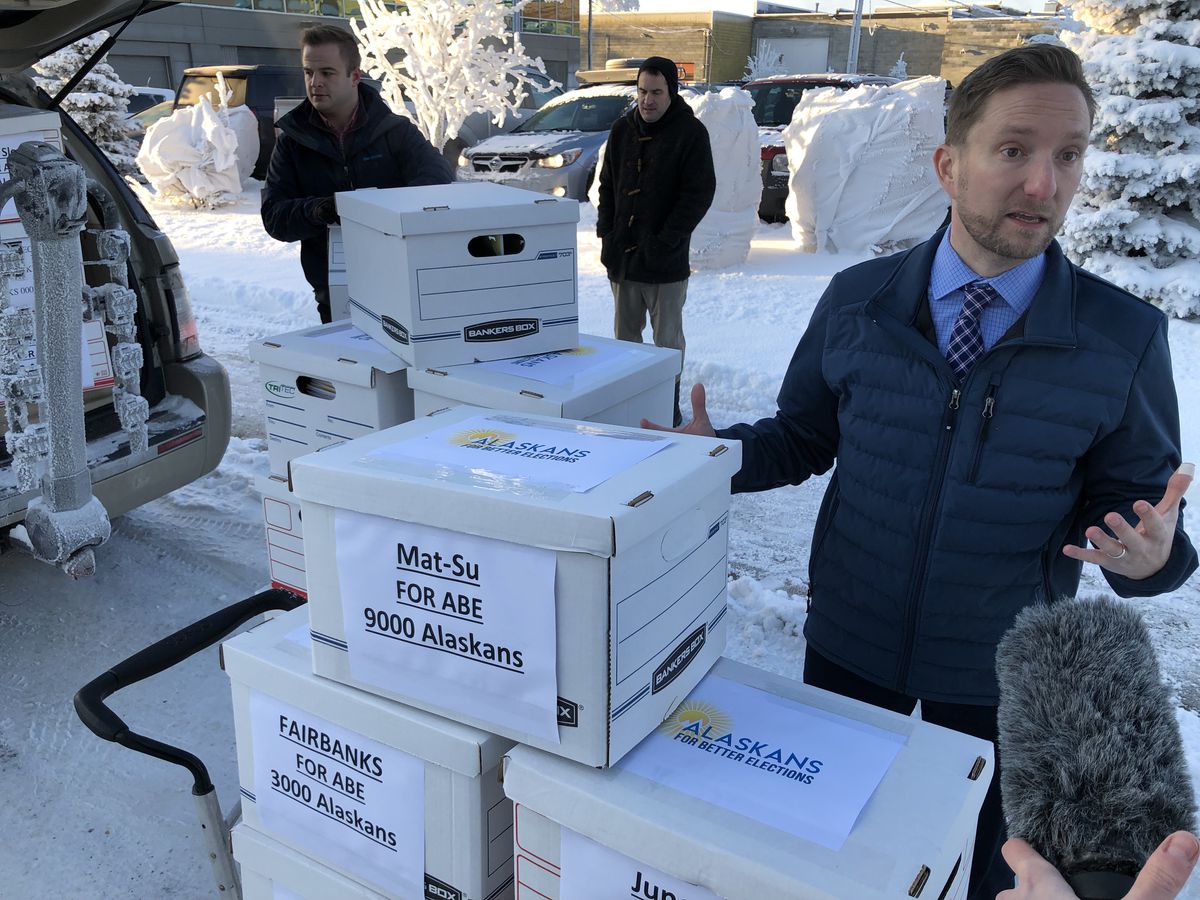 Supporters of a ballot measure designed to reform Alaska’s voting system turned in at least 41,000 signatures to the Alaska Division of Elections on Thursday, bringing the idea one step closer to a statewide vote. The legality of the proposal has been challenged by the state, which is contesting it in court.

To earn a spot on the ballot this fall, a measure needs the support of 28,501 registered Alaska voters from at least 30 of the state’s 40 House districts. The names submitted Thursday will be verified by the Division of Elections, and the measure’s backers said they are confident they will have enough.

“We do have signatures from every (state House) district, all 40 districts,” said Jason Grenn, co-chair of Alaskans for Better Elections, the group backing the measure.

The group’s official count is 41,068, but he said a few signature books arrived after that tally.

“We feel pretty confident that we’re set up,” he said.

Even if the measure reaches its signature goal, it faces a legal hurdle before reaching voters. The state initially rejected the proposal, but that rejection was overturned by an Anchorage Superior Court judge. The state has appealed the Superior Court decision, and the Alaska Supreme Court is scheduled to hear arguments in court on Feb. 19.

As written, the measure would have three effects:

• It would change the state’s primary election system so all candidates, regardless of party, appear on the same ballot. That ballot would be available to all voters. Under the new program, multiple candidates from the same party could advance to the general election.

• It would require campaigns to disclose the source of so-called “dark money” contributions.

According to the latest campaign finance report, Alaskans for Better Elections has received $781,896.87 in financial contributions and staff support from organizations backing the proposal.

Most of that support has come from Outside, where contributors hope to use Alaska as an example of success that can be applied nationwide.

“We see it as the gold standard of election reforms,” Grenn said.

The state of Maine and some municipal governments, including New York City, already use ranked-choice voting.

In 2002, Alaska voters rejected a ballot measure that would have installed a form of ranked-choice voting. At that time, the approach was endorsed by the Alaska Republican Party and opposed by Democrats.

This time, the Republican Party is skeptical of the idea. In an opinion column, party vice president Ann Brown expressed her belief that “this initiative can largely be seen as a plan by progressives to take control of Alaska’s political system.”

She pointed out that Grenn, an independent, lost a three-way election in 2018 to a Republican, Rep. Sara Rasmussen, R-Anchorage.

Asked whether his support for the measure is related to that loss, Grenn said no, explaining that he won a similar three-way race in 2016.

In addition to the election reform measure, there are two other active ballot measures campaigning to reach voters.

The chairman of a group supporting a ballot measure that seeks to move legislative sessions to Anchorage did not immediately return a phone call seeking information Thursday. Nathan Graham, a spokesman for the ballot measure seeking to raise oil taxes, said his group is optimistic it will meet its signature goal by Jan. 17, when it intends to submit signatures.