‘In a panic’: Elimination of senior benefits leaves some of Alaska’s oldest residents with tough choices 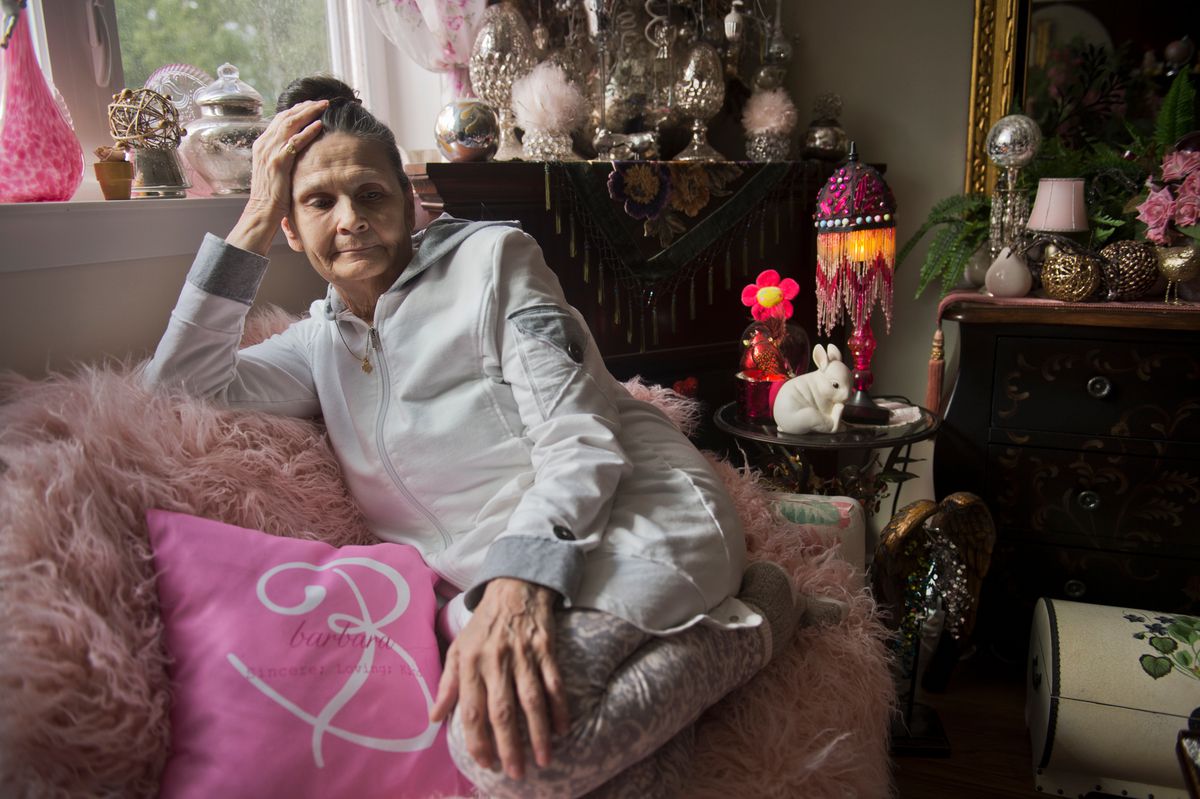 Barbara May, 78 of Anchorage, was notified in mid-July that the Alaska Senior Benefits Payment Program had ended. May said she depended on the program's $175 monthly payments to cover her expenses. (Marc Lester / ADN)

Barbara May, 78 of Anchorage, was notified in mid-July that the Alaska Senior Benefits Payment Program had ended. May said she depended on the program's $175 monthly payments to cover her expenses. (Marc Lester / ADN)

Barbara May is scared.

After years of receiving monthly checks through the Alaska Senior Benefits Payment Program, she got a letter last month notifying her that the program had ended. There was no state funding. She wouldn’t receive a $175 check at the end of July or any month after that.

May, who said her only other income is $997 a month in Social Security, has no backup plan. She has no close family to lean on, she said.

“I never dreamed in a million years that at 78 years old I’d be in a position like this,” said May, who moved to Alaska with her parents in 1942. “It’s so frightening.”

May is one of about 13,520 Alaska seniors who received a monthly check over the last year and won’t anymore, according to the Alaska Department of Health and Social Services. That follows Gov. Mike Dunleavy’s announcement June 28 that he’d vetoed more than $400 million from the state operating budget, including all of the funding for the senior benefits program — about $20.8 million.

Dunleavy says the cuts are part of a two-year plan to balance the budget without reductions to Permanent Fund dividend checks and without raising taxes. But supporters of the senior benefits program say the governor has suddenly ripped away monthly income that some of the state’s oldest residents have long depended on.

With the veto dropping three days before the start of the fiscal year, seniors had no time to plan, said Ken Helander, advocacy director for AARP Alaska, an advocacy group for seniors.

“That, I think, was unconscionable and cruel,” he said.

Under the senior benefits program, Alaskans age 65 and up who have “low to moderate income” could qualify for monthly payments from $76 to $250, according to the state health department. A couple states have similar cash-assistance programs for low-income seniors, Helander said. But none directly mirror Alaska’s.

Helander and other supporters of Alaska’s program say the state government should help cover the basic needs of some of its poorest, oldest residents who are living on a fixed income in an expensive state.

Dunleavy spokesman Matt Shuckerow said the governor has had to make tough decisions as he cuts spending to close a budget deficit.

“There are and have been difficult decisions being made and that, in large part, is something that was done in this instance,” Shuckerow said. “I think, as many have not pointed out, these same individuals have had more than $3,500 taken from them in the form of their PFD.”

Some uncertainty still clouds this year’s budget: The Legislature has proposed a bill that would reverse most of Dunleavy’s vetoes, including the cut to the senior benefits program. It would also set the Permanent Fund dividend at $1,600.

Dunleavy will now decide whether to sign the bill, veto all or some of it, or allow it to become law without his signature.

Shuckerow said the governor is considering the Legislature’s bill and input from Alaskans. Dunleavy has previously indicated he intends to veto most, if not all, of the funding added back by legislators.

Across the state, Alaskans are tangled in the sprawling impacts of Dunleavy’s budget vetoes.

The vetoes have prompted widespread protests, the launch of a recall effort and warnings of a recession.

But not all are opposed to the cuts.

“The governor is only doing what he was hired to do,” said Jan Boylan, before starting a game of bridge at the Anchorage Senior Activity Center on Tuesday. “Go, governor, go.”

Others think the stakes are too high for vulnerable seniors.

“These are people who are making choices between a necessity and a necessity,” Helander said. “There is nothing that is frivolous. This is about medicine. It’s about heat. It’s about food. It’s about rent, medical care.”

It’s not just the cuts to the benefits program impacting Alaska’s seniors, but also the vetoes to funding for Medicaid and Adult Public Assistance, among other programs, said Darlene Supplee, executive director of the Fairbanks Senior Center.

“The way this was all done, it just created havoc,” she said.

“Seniors are just in a panic,” said Erin Walker-Tolles, executive director of Catholic Community Service, an organization that runs several senior centers in Southeast Alaska. “We are getting so many calls."

‘Deja vu all over again’

Alaska is home to a growing senior population.

The number of seniors living in Alaska has increased by more than 5% each year since 2010, faster than any other state, according to the Alaska Department of Labor and Workforce Development. That’s largely because Alaska’s population is aging, not because seniors are moving north, said demographer Eric Sandberg.

“People who came up here and helped build our state are now aging,” said Cara Durr, director of public engagement at Food Bank of Alaska. “I think there is a sense that we should take care of them.”

For decades, Alaska’s seniors have had access to some sort of senior benefits program.

The earliest payments to Alaska seniors can be traced back to 1915, according to news accounts.

Then, the territorial legislature approved an old-age bonus program, paying some seniors $12.50 per month if they had lived in the territory for at least 10 years. The legislature didn’t extend the payments to Alaska Natives.

Then came Alaska’s “Longevity Bonus,” proposed amid the first glut of oil wealth.

The program was established in 1972 to encourage older Alaskans to stay in the state. There were no income restrictions at first. Payments started at $100 a month for Alaska seniors who had lived in the state for at least 25 years.

In the years that followed, the program was repeatedly modified, especially after a court ruling required that it be open to seniors who lived in Alaska for at least one year.

Monthly payments grew to up to $250 a month. The New York Times in 1984 described the payments as a monthly gift added to Alaska’s “already impressive list of benefits for the elderly.”

In 2003, Murkowski, as Dunleavy did this year, said the end of the payments was driven by the state’s budget circumstances. Also like this year, the Legislature balked at the idea. Murkowski acted anyway, vetoing $138 million from the state budget that June, including all funding for the longevity program.

Rokeberg recalled that lawmakers reached a deal with Murkowski: They would accept the ending of the program if he agreed to a new needs-based system.

As of December 2018, most Alaskans receiving senior benefits lived in Anchorage.

The highest payment was reserved for an individual who earned up to $11,700 a year or a couple whose annual income was up to $15,848, according to the most recent income limits.

Without the check, she said, she’s feeling the strain. She’s now living on about $1,150 a month, including $19 in food stamps, she said.

Watkins traveled around in a wheelchair at the Anchorage Senior Activity Center on Tuesday, passing out lunch menus to other seniors and staff.

Watkins said she moved to Alaska in 1995 with her husband, who later died from leukemia.

She now lives alone in low-income housing, she said. She said she had voted for Dunleavy for governor, attracted by the promise of a $3,000 dividend, but did not expect the elimination of the senior benefits program.

“Some of the people, when you ask why haven’t you applied before (say), ‘Well, I’ve never needed it, but now I do,’” Budahl said.

On a recent weekday, some Anchorage seniors lined up with others in the hot afternoon sun at Lutheran Social Services mobile food pantry.

Judy Wihlfehrt, 68, filled a cart with food. She said she’d received $175 a month under the senior benefits program for about six months. She works part-time as a waitress and also collects Social Security, she said.

The monthly checks from the state helped put gas in her car, buy dog food and pay for medical care.