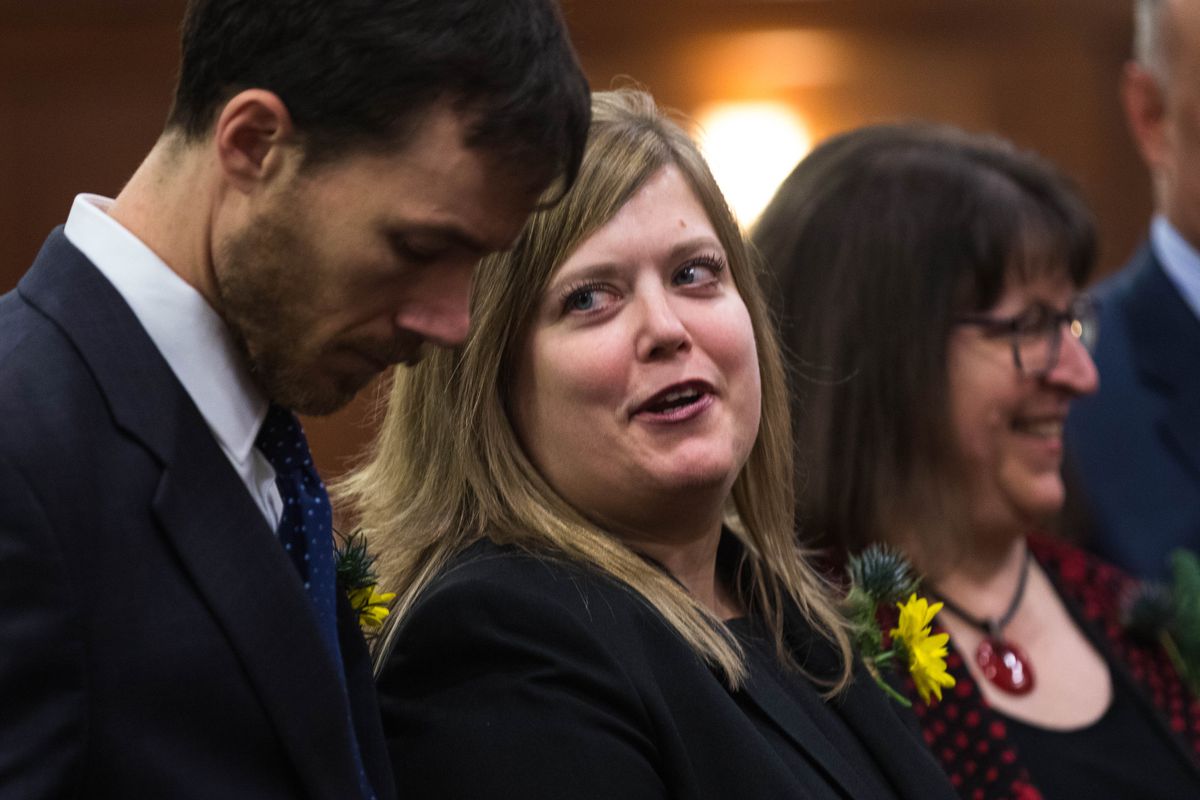 Rep. Geran Tarr, D-Anchorage, on the first day of the legislative session on Tuesday, Jan. 15, 2019 at the Alaska State Capitol in Juneau. (Loren Holmes / ADN)

Rep. Geran Tarr, D-Anchorage, on the first day of the legislative session on Tuesday, Jan. 15, 2019 at the Alaska State Capitol in Juneau. (Loren Holmes / ADN)

JUNEAU — A Democratic member of the Alaska House of Representatives will become an independent Democrat in the House, creating the possibility that the House will organize on Thursday without any side controlling a majority of its 40 votes.

Late Wednesday, Rep. Geran Tarr, D-Anchorage said she will not remain a part of the House’s multipartisan coalition. That decision leaves the coalition with only 20 members, one short of a majority.

It’s the latest sign of the uncertainty and confusion that remains in the House after the election of Speaker Louise Stutes, R-Kodiak, by a bare-minimum 21-19 vote.

Even though she will not be a member of the coalition, Tarr said she will still vote in favor of a plan of organization that leaves coalition members in charge.

“I am hoping we’ll be on the floor tomorrow, we’ll vote on the committee on committees report,” she said. “That will pass as soon as possible and we will get to work.”

She said a 21- or 22-member House majority is “marginal,” and that by withdrawing from the coalition, she may force the creation of a larger “committee of the whole” that includes additional Republicans.

Two years ago, Rep. Gary Knopp, R-Kenai, took a similar action, forcing the House into an extended deadlock that ended with the creation of a 25-member coalition majority.

Tarr said her top priority is reinvigorating Alaska’s COVID-19 response by supporting passage of a bill that retroactively extends a state of emergency that expired Sunday.

“I just am hoping to find a way to move forward and start working on the public health emergency declaration,” she said.

Tarr’s decision follows a similar action Tuesday from Rep. Sara Rasmussen, R-Anchorage, who said she will act as an independent Republican. If both decisions stand (and no other House members adjust their positions), the House will be left with an unprecedented 20-18-1-1 split.

No bloc will have enough votes to pass legislation on its own, creating what parliamentary democracies call a minority government.

Stutes said in a written statement that she is committed to finding a place within the coalition for Tarr to fight for the extension of the emergency declaration.