Lydia Jacoby’s journey to the Olympics started with a breakout performance at age 10. The pandemic helped her train even harder. 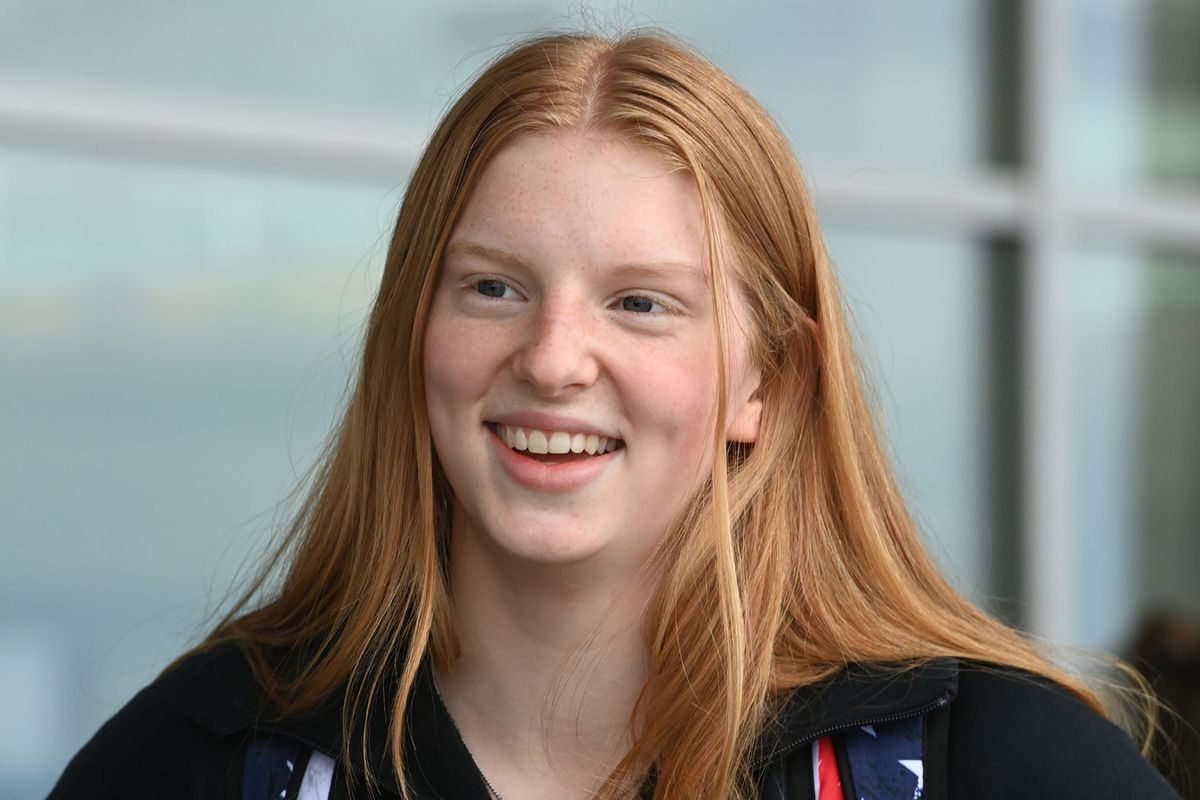 They have a small sailboat they use to explore their front yard, Resurrection Bay. And they have a daughter who took swimming lessons when she was a little girl because so much of the family’s life is around water.

“Honestly, that’s how we got started on this whole thing, trying to make sure she felt comfortable in the water if something went wrong. She oughta know what to do if she falls,” Rich Jacoby said. “We didn’t quite expect it to turn out the way it did.”

Jacoby became Alaska’s first Olympic-bound swimmer on June 15 when she came from behind to claim second place in the women’s 100-meter breaststroke at the Olympic Trials in Omaha, Nebraska.

That night in Omaha, three American women swam the three fastest times in the world this season, with world-record holder Lilly King leading the way. Jacoby’s time -- 1 minute, 5.28 seconds -- would have won the silver medal at the 2016 Summer Olympics.

Not a problem, said Jacoby, who just finished her junior year of high school and is a year away from joining the University of Texas swim team, which won a recruiting war to get her. She is nervous but eager to dive in with the big dogs.

“During recruiting, one of the coaches called me a gamer, and that’s definitely a good term,” Jacoby said. “The more pressure there is, the more I want to succeed.”

Jacoby didn’t emerge suddenly from a pool in Omaha like some fully formed Olympic goddess born from a foamy sea.

She was 14 when she qualified for the 2020 Olympic Trials by hitting the qualifying standard for the 100-meter breaststroke at the U.S. Winter Nationals in North Carolina. Four weeks earlier, as a freshman on the Seward High School swim team, she set a state record in the 100-yard breaststroke at the Alaska state high school championships.

Even before that, Alaska coaches knew Jacoby was one to watch.

“She had a really great breakout meet as a 10-year-old at the Western zone championships,” said longtime Anchorage swim coach Cliff Murray. “Since then she’s been on everybody’s radar, at least in Alaska.

“That kick has always been really great.”

It’s what generates much of a breaststroker’s speed, and it’s what separates Jacoby from most breaststrokers. She has a combination of strong legs and flexible ankles that propel her through the water with great force.

Murray calls Jacoby’s kick “a God-given gift.” He could be right, because Jacoby doesn’t remember a time when she didn’t have it.

Jacoby doesn’t rise out of the water the way King does at the start of her stroke; her profile is lower and she moves more water off her lower body than her upper body.

“Her feet catch like a sail, and she has such power from her upper legs and glutes that she is just throwing water back with immense power,” Murray said.

“She has absolutely without a doubt the best breaststroke kick I’ve ever seen, and I’ve seen a lot of Olympic-caliber athletes. She has it, and we’ve worked hard not to change it.”

It took a global pandemic to get Jacoby to Tokyo.

COVID-19 pushed the 2020 Summer Olympics and the 2020 U.S. Olympic Trials to 2021, and the delay was a boon to young swimmers, who got another year to mature physically and mentally.

“If this meet had happened last year, I would not be where I am today,” Jacoby said.

Jacoby is one of 11 teenagers who qualified for the U.S. Olympic swim team, the fourth-youngest on a 50-member team. The pandemic proved particularly beneficial for her because her training changed dramatically because of it.

At first, she couldn’t swim at all because COVID-19 shut down swimming pools across Alaska, including the Seward pool where Jacoby trains with the Tsunami Swim Club.

Then she started training more than ever.

When Anchorage pools reopened before Seward’s did, Murray invited Jacoby to train with the Northern Lights Swim Club. With the Olympic Trials coming up, the Jacobys rented an apartment for Leslie and Lydia in Anchorage, 120 miles from Seward.

“It became a bigger part of my life than ever before,” she said. “The focus was on training all summer and I carried that into the fall. Then this spring I really put my head down and worked harder.”

Earlier this month in Omaha, she lowered it twice -- first in the semifinals, where she swam 1:05.71 to set a national 17-18 age-group record, and again in the finals, where she earned her ticket to Tokyo with the 1:05.28.

“The exciting thing is she hasn’t really trained much compared to her peers,” Murray said. “Boy, the sky is the limit.”

Well-rounded, too. If this whole swimming thing doesn’t work out, there are other places for her to shine.

She’s an accomplished musician who sings and plays standup bass and guitar. As a member of the Snow River String Band, she appeared at numerous music festivals over the years until one of the band leaders went off to college. Sometimes she sings the national anthem before swim meets.

She has appeared in several high school and community theater productions. She’s done the junior Mount Marathon race. She’s a writer who last summer worked as an intern for the Seward Journal.

But swimming is Jacoby’s passion, one she came to on her own. Rich Jacoby said his daughter’s drive is internal and not the result of prodding or pressure from parents or coaches. He and Leslie never had to cajole Lydia out of bed so she could make it to an early morning practice, he said.

And so while her parents chose to put her in the pool, Jacoby, an only child, chose to stay there.

“Most kids in Seward go through the swim team at some point, because living in a maritime community, it’s important,” Jacoby said. “I really enjoyed it. I had a big group of friends who did it. When I got a little older, I started winning, and I liked it and wanted to keep doing it — and here I am.”

And here she is. After a brief visit home after the Olympic Trials, Jacoby flew to Hawaii on Sunday for a training camp with the rest of the U.S. swim team. From there she’ll head to Tokyo as one of Team USA’s many medal contenders.

“I think she’s right in line with that,” he said. “She had a meeting with the team coaches and athletes (in Omaha) and that’s actually one of the big goals of the team right now -- they want two medals in every event.”

It’s possible Jacoby could contend for more than one medal. There are two Olympic relay races that include a breaststroke leg — the women’s medley relay and a new event, the mixed-gender medley relay. Even if Jacoby were to swim in a preliminary heat but not the final, she would share in any medal earned by the Americans.

The women’s preliminaries for the 100-meter breaststroke will happen early in the morning on Sunday, July 25, Alaska time. It will be a moment Jacoby has been thinking about for a long time.

“Like any kid who starts doing a sport, I always thought, ‘Oh, one day I want to be an Olympian,’ " she said. “... People I’ve always looked up to as idols and inspirations are now my peers.”