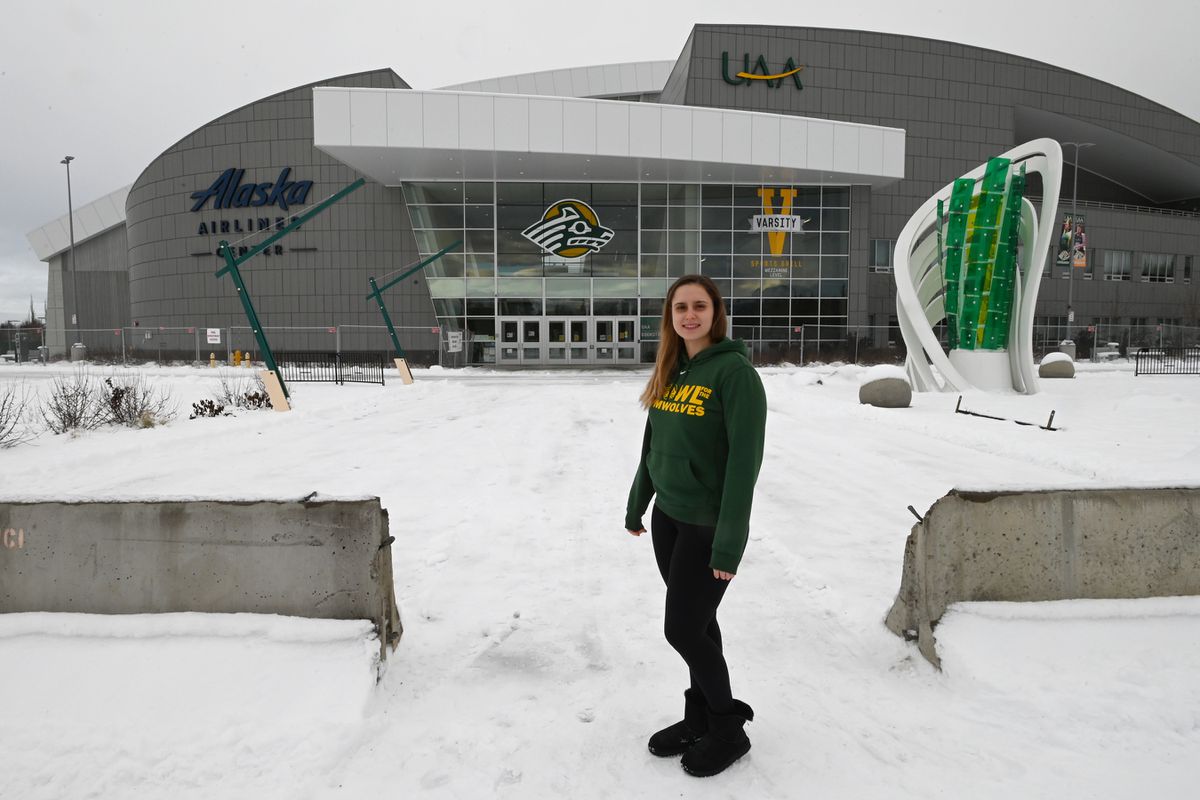 In the video where Winter Osborne of Fairbanks puts on a face mask while doing a handstand, teammate Rachel Decious sits on a couch in the background and casually scrolls through her phone while a scene worthy of “America’s Got Talent” plays out in front of her.

Such is the life of a UAA gymnast these days.

The Seawolves are performing feats large and small while hoping to spark interest as they strive to save their team. One of three UAA sports eliminated by the University of Alaska’s Board of Regents, the gymnastics team needs to raise $880,000 by February to gain reinstatement.

Raising that much money during the hard times of a pandemic is as formidable a task as perfecting a full-twisting backflip on the balance beam. It’s almost too much to comprehend, which is why the Seawolves are embracing an every-little-bit-helps philosophy.

“One of the biggest messages I’m trying to broadcast is nothing is too small,” coach Marie-Sophie Boggasch said. “It’s very hard to find one person or one company who can just donate that (whole amount). If everybody who has a little stake in gymnastics or maybe just wants to watch our competitions, if instead of buying a coffee every day this week, maybe those 10 or 15 bucks can go to saving this team.”

The effort can be exhausting.

“I don’t know the last day I had off. Probably in July before I was hired,” said Boggasch, who was promoted from assistant coach to interim head coach when former coach Tanya Ho resigned.

Soon after Boggasch was named head coach, UAA recommended the elimination of gymnastics, hockey and skiing in order to meet budget cuts required because of reduced state funding.

Boggasch has been working as coach and team savior ever since, with the added chore of trying to lure opponents to Alaska. Because of COVID-19-related travel concerns and restrictions, at this point UAA doesn’t have a single home meet on the schedule beyond a Dec. 13 intrasquad scrimmage.

As gymnasts returned to Anchorage after the summer break, they added fundraising to jam-packed lives that include going to school full-time while participating in an NCAA Division I sport.

“There’s 20 hours a week in normal practice time, so we’re very, very busy being student-athletes,” Osborne said. “I feel like every spare moment we’re reaching out to the gymnastics community and the business community and doing anything we can do."

A viral video could make a difference, which is the hope with the handstand challenge. Osborne recorded about five takes before getting hers right, an effort that included a dismount that incurred damage to the coffee table she performed on.

Junior Winter Osborne challenges YOU to participate in the #maskupinhandstands challenge. #Maskup in a handstand, then...

Though you can’t see it in the video, she braces her tiptoes on the ceiling for balance. Decious appears in the background as a seemingly disinterested party, but Osborne said her teammate was enthusiastic during earlier efforts.

“In the first one she’s cheering,” Osborne said.

Members of the team executed the handstand challenge in a variety of locations, including outside in the snow, with the hope the videos might help save the program.

″It’s a really big number,” Osborne said of the $880,000 fundraising goal, "but I think that’s why our head coach came up with this idea — it’s a fun way to raise money and it’s an incentive to get other people to try it.

“It’s so nice to have the whole team working on it. I do believe it’s possible.”

One of 13 teams at UAA, gymnastics is the only one that exists because of a court order.

The team was formed as the result of a 1984 settlement of a 1979 Title IX federal lawsuit filed by members of the UAA women’s basketball who alleged inequities in the school’s athletic department. Among other things, the settlement specifically called for the creation of a women’s gymnastics team.

Boggasch hoped the settlement might make UAA legally bound to keep the gymnastics team and shared it with a couple of lawyers, “but unfortunately (there are) a couple of things that don’t make it super-relevant at this point,” she said.

Gymnastics is one of three teams facing elimination — men’s hockey and alpine skiing are the others — and Boggasch wonders how Title IX might come into play if the hockey team reaches its fundraising goal but the gymnastics team doesn’t. Could the school maintain compliance if it keeps a men’s team but eliminates a women’s team?

Greg Myford, the UAA athletic director, addressed that issue by email shortly after the Board of Regents voted to eliminate the three teams while extending each a chance at reinstatement through fundraising.

“This would certainly be examined closely to confirm that gender proportionality and the overall opportunities being afforded remain intact and meet requirements,” he said. “Title IX doesn’t say that a female team is required to offset a male team that is fielded. But it does assume that the institution’s athletic rosters in total offer ample opportunities and support for female student-athletes in proportion to what is offered on the men’s side. We would make sure of that.”

As the Seawolves stand on their hands to encourage $10 donations, Boggasch thinks it’s important to remember why UAA has a gymnastics team.

“Obviously that’s a long time ago. We’ve been around since 1984, but that doesn’t mean we still don’t need opportunities.”