As Fourth of July looms, governor urges Alaskans to mask up and keep their distance 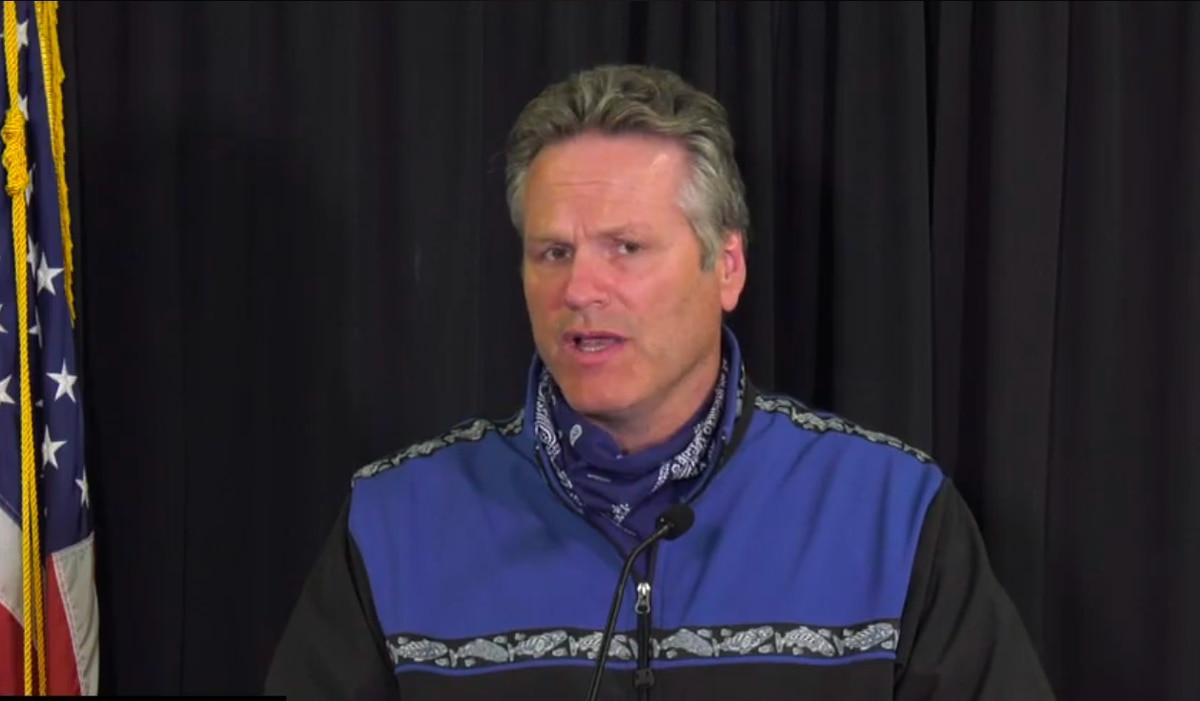 With the Fourth of July weekend coming up, Alaska Gov. Mike Dunleavy returned to the public stage to urge Alaskans to cover their faces in public and maintain social distance.

Alaska’s COVID-19 cases are surging, with small outbreaks around the state. The state on Tuesday reported the highest new daily case count yet — a total of 48 Alaskans and nonresidents — though no new hospitalizations or deaths from the novel coronavirus.

“I want to just remind folks that the virus is real,” Dunleavy said during the state’s first media briefing on COVID-19 in several weeks. “It’s alive and it’s spreading.”

The governor and Alaska’s chief medical officer, Dr. Anne Zink, said new cases are showing up in younger people with few if any symptoms but who can spread the disease to vulnerable seniors or people with underlying health problems.

There were three people hospitalized with confirmed COVID-19 infections as of Tuesday, officials said, and one person was on a ventilator.

Dunleavy, while praising the state’s relatively low case counts and high testing rates, also tried to get out a message of caution ahead of the holiday weekend.

He urged people to cover their faces in public enclosed places like stores and “put some distance between you and others” while out fishing or at a backyard party.

Numerous communities have canceled all holiday plans, including Seward, where an outbreak began last week.

“I’m just asking especially with this weekend coming up that we show not just ourselves but again we show this country that Alaska can think of others as we’re thinking of ourselves,” Dunleavy said. “If we can do our best, we’ll keep these numbers at a certain level."

Alaska’s COVID-19 rates held steady in the single digits for weeks in May, but then began climbing again after the state’s economy reopened. Some clusters were also linked to Memorial Day gatherings.

Now the state’s infection rates are rising in part because far more people are getting tested due to requirements for people traveling into the state or working in industries like seafood, officials say. But there are also new clusters associated with people going to bars and mixing with still more people in the community after that.

The state is investigating seven cases of the virus involving people who were at bars after they were infected, Zink said. Going to a bar is a “really high-risk activity,” she said. And if people do go to a bar — especially one indoors — Zink said they should limit their contact with others, particularly the vulnerable, for two weeks after attending.

People who test positive for COVID-19 are now coming into contact with dozens of other individuals, as compared to earlier in the pandemic, when they might have been in contact with just a few people, she said.

“What we’re really noticing instead of people having one contact or five contacts when we talk to someone, they’ll have 20 contacts or 40 contacts,” Zink said.

The state’s health department has continually said they’d like to hire 500 more contact tracers. But the process has taken longer than first expected due to delays in technology and agreements with partners, said Heidi Hedberg, director of Alaska’s Division of Public Health.

Zink addressed the continued variability in turnaround times for testing within the state, noting that commercial labs outside Alaska could go from a few days of wait time to several days as cases in the Lower 48 spike. In Alaska, some urgent care facilities can conduct rapid testing in minutes, Zink said, and hospitals and public health labs take about one to two days to process results.

At this time, Zink said, the state isn’t planning to restrict testing in order to conserve test kits, but is working to further expand testing.

Dunleavy urged Alaskans to continue taking steps to help limit the spread of the virus, acknowledging that many people, including the governor himself, feel “done” with the virus.

He asked that people “still work together to the best extent that we can with our fellow Alaskans. That we still say, ‘Yeah, all right, you know I’m going to go to the store, I’ll throw the dang mask on,’ that we still do our best to socially distance.”