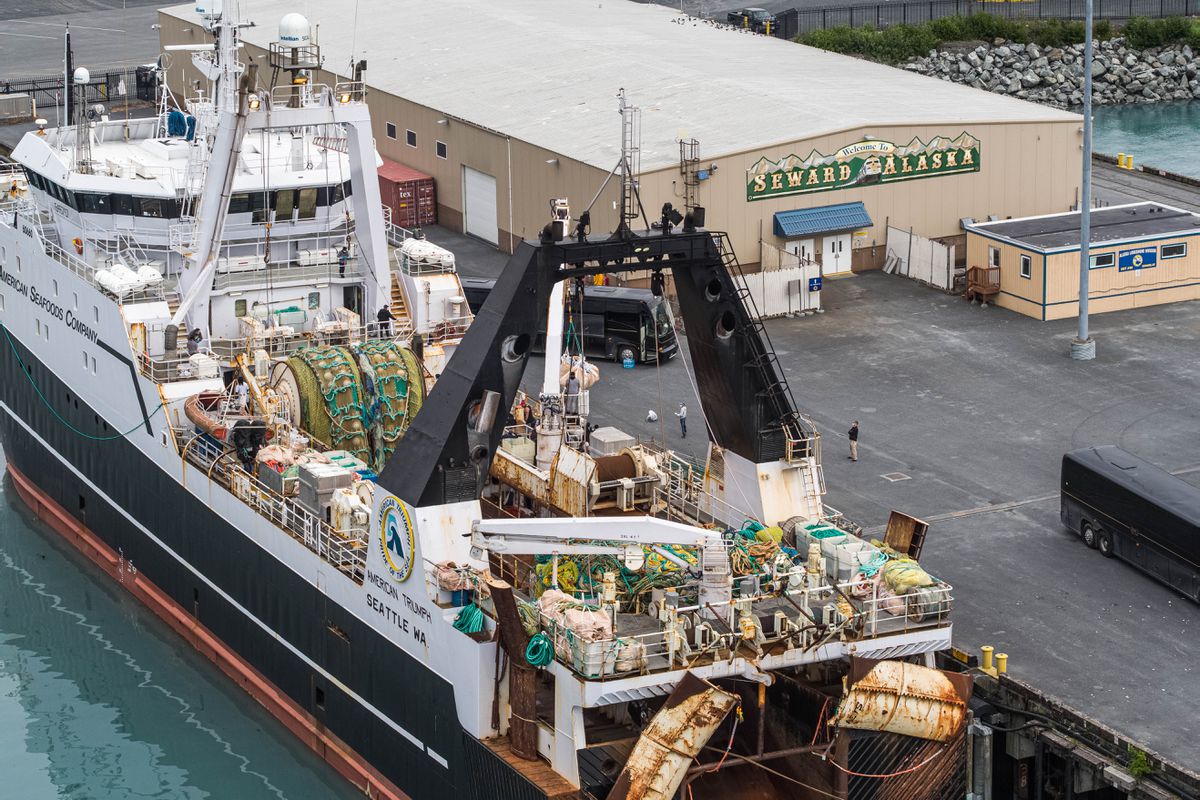 The American Triumph docks in Seward on Wednesday. American Seafoods, which operates the factory trawler, reported over the weekend that 85 crew members tested positive for COVID-19. The crew disembarked in Seward and was transported by private bus to Anchorage, where they will be isolated for further care. (Loren Holmes / ADN)

The American Triumph docks in Seward on Wednesday. American Seafoods, which operates the factory trawler, reported over the weekend that 85 crew members tested positive for COVID-19. The crew disembarked in Seward and was transported by private bus to Anchorage, where they will be isolated for further care. (Loren Holmes / ADN)

Alaska’s three largest coronavirus outbreaks involve workers in the seafood industry, a sector that prompted concern as the the summer’s fishing seasons started in June but for months seemed to be under control.

Now the outbreaks have changed.

The new outbreaks come with “high attack rates” and a harder-to-contain demographic: a mix of out-of-state workers and residents who go from working close together in processing plants to friends and family at home and the community at large, state epidemiologist Dr. Joe McLaughlin said Thursday.

As the season started, thousands of seafood workers flowed into the state. Seafood companies filed plans promising to test workers multiple times and quarantine them, given the potential that outbreaks on vessels and in processing plants could overwhelm fragile state and local health care systems.

Early on, halting transmission from infected seafood workers was “pretty easy,” McLaughlin said at a media briefing. Some workers were halted by positive COVID-19 tests before they even arrived. Others entered an immediate 14-day quarantine when they arrived in Alaska.

Now, workers are testing positive outside that quarantine period. And some of them live in the communities where they work.

“Potentially that is a way of facilitating spread into the community, and also vice versa if you’ve got community members who are going into a closed camp, and can potentially bring COVID-19 into that fish processing plant,” McLaughlin said. “So we are seeing a change in that way.”

More than two-thirds of the workers aboard the huge trawler that left Seattle in late June tested positive after they docked in the port of Dutch Harbor. None reported symptoms before boarding, owner American Seafoods said. The factory trawler arrived in Seward on Wednesday, and infected crew immediately boarded buses for Anchorage, where they will isolate.

[Seward announced 96 new COVID-19 cases at a seafood plant as a trawler with 85 infected crew arrived. They’re all headed for Anchorage.]

But eight of the Alaska Glacier Seafoods workers live in Juneau. Out of the 250 employees at the OBI plant, 42 live in Seward, including 11 who tested positive during the ongoing outbreak.

“I think it is really challenging when people are processing side-by-side to mitigate the transmission, and that’s why we’ve been concerned since the very beginning with meatpacking plants and seeing what’s happened,” Dr. Anne Zink, the state’s chief medical officer, said during the briefing. “But those that have residents and nonresidents working together are more challenging versus these very contained outbreaks.”

Local workers don’t usually stay in company housing like some processors provide. Instead, they go between work and home, and maybe visit businesses or attend gatherings where they could potentially infect others or get infected and bring the virus into the plant. Sometimes, nonresident workers also live off-campus.

Gideon Wilke, 26, has been coming up to Seward from Oregon, to work as a mechanic there for eight years. He said he was permitted to live off-campus this summer in Seward, commuting daily to work at the OBI plant, until it closed down earlier this week.

Every morning, he received a temperature check. He said he has also been taking precautions all summer to avoid unknowingly spreading the virus to fellow workers or locals. “My wife, because she’s in contact with me, has been extra careful going into town, keeping shopping trips as short as possible,” he said. “The locals are really nice to her even though they know I work at the plant,” he added.

Wilke was tested earlier this week, along with his colleagues, and again on Thursday. His first test came back negative, but he said he’s worried because he’s been in close contact with colleagues who tested positive. The long hours and close quarters make it difficult to social distance, he said.

“Most workers here work about 13-15 hours a day,” he said. “That is one of the things that a lot of people love and hate about this place: getting lots of hours and overtime. It pays enough we don’t have to work the rest of the year.”

Wilke said so far, he hasn’t experienced any symptoms of COVID-19.

“But when you work in a fish cannery, you get something called ‘fish lung.' It’s a cough with lots of phlegm. And almost all of us had that.”

At the Alaska Glacier Seafoods plant, the original cluster of nine positive cases stemmed from an employee who contracted the virus through community spread, Juneau city and borough officials say. Testing performed on another 113 employees revealed the additional positives.

Mila Cosgrove, deputy city manager at the City and Borough of Juneau, drew a parallel between that outbreak and the one occurring at the seafood plant, saying they “really in some ways could happen in any work site.”

The nature of COVID-19 — about 20% of people tested lately in Alaska aren’t showing symptoms — means someone can have it but not even feel sick, or they could get sick later, Cosgrove said.

“So they interact with people,” she said. “People are a little loose around COVID because it doesn’t feel real to them yet.”

The Alaska Glacier Seafoods plant is near the ferry dock at Auke Bay, not in downtown Juneau. Worker housing is provided there.

A plant owner did not respond to a request for comment. Cosgrove said emergency operations and public health workers told her Alaska Glacier Seafoods’ COVID-19 mitigation plan is “pretty robust” and includes directions that nonresidents travel only between work and home.

Danny Seavey, 38, was born and raised in Seward, where he now manages Seavey’s IdidaRide Sled Dog Tours, owned by his father Mitch, a three-time Iditarod champion. Seavey says the recent outbreak in town, where both residents and nonresidents worked at the now-closed plant, doesn’t worry him in particular.

“Alaskans are traveling like crazy like we’ve never seen before,” he said Thursday. “I go down to the grocery store and it’s packed. So it’s hard to blame fishing industry workers more than anyone else.”

For Seavey, life has mostly gone on as usual: His tour business is still up and running, with new safety protocols, fewer tours. His dogs, after all, “have to keep running one way or another,” he said.

The seafood outbreaks come as Alaska experiences soaring case numbers generally and community spread of the virus throughout the state, including in Anchorage and rural areas like Fort Yukon and the Copper River region.

[Fort Yukon and Copper River communities avoided coronavirus for months. Now cases are rising in both.]

Alaska’s COVID-19 transmission rate this week was 1.3: Anything over 1 produces high rates of spread, officials say. While the state’s virus numbers are too low — and skewed by close-packed seafood workers — to compare with those in other states, health officials say they expect cases to keep climbing unless Alaskans change their behavior to start wearing masks and avoiding large gatherings.

The state reported 68 new cases Thursday, including 65 residents and three nonresidents, according to the Alaska Department of Health and Social Services COVID-19 dashboard.

Although the state reported on Wednesday evening that 85 residents and 11 nonresidents at the OBI Seafoods plant in Seward had tested positive for the virus, these numbers were not reflected in Thursday’s case counts. Zink said Thursday that while all cases are eventually reflected in the state’s numbers, “it can take a bit for those numbers to be fully investigated and involved in the data.”

Nineteen Alaskans have died with the virus. The state’s per capita death rate is the second lowest in the nation. But state and local officials here say they’re concerned the sudden spike in new cases, including those in seafood workers, could lead to illness that overwhelms ICU beds in Anchorage.

There were 22 patients with COVID-19 hospitalized in Anchorage on Thursday, according to a municipal dashboard.

The governor has declined to require masks more broadly, and most Alaska communities outside Anchorage have followed his example, though a number adopted their own requirements. The City of Wasilla on Thursday announced it would require masks at the city library starting Friday.

Of the new resident cases reported Thursday, 29 involved people from Anchorage, 11 from Fairbanks, six from Wasilla, four each from the Valdez-Cordova and Yukon-Koyukuk census areas, three from North Pole, two from Chugiak and one each from Big Lake, Girdwood, the southern Kenai Peninsula, Northwest Arctic Borough, Palmer and the Southeast Fairbanks Census Area.

Three nonresident cases were also confirmed from an unknown location.