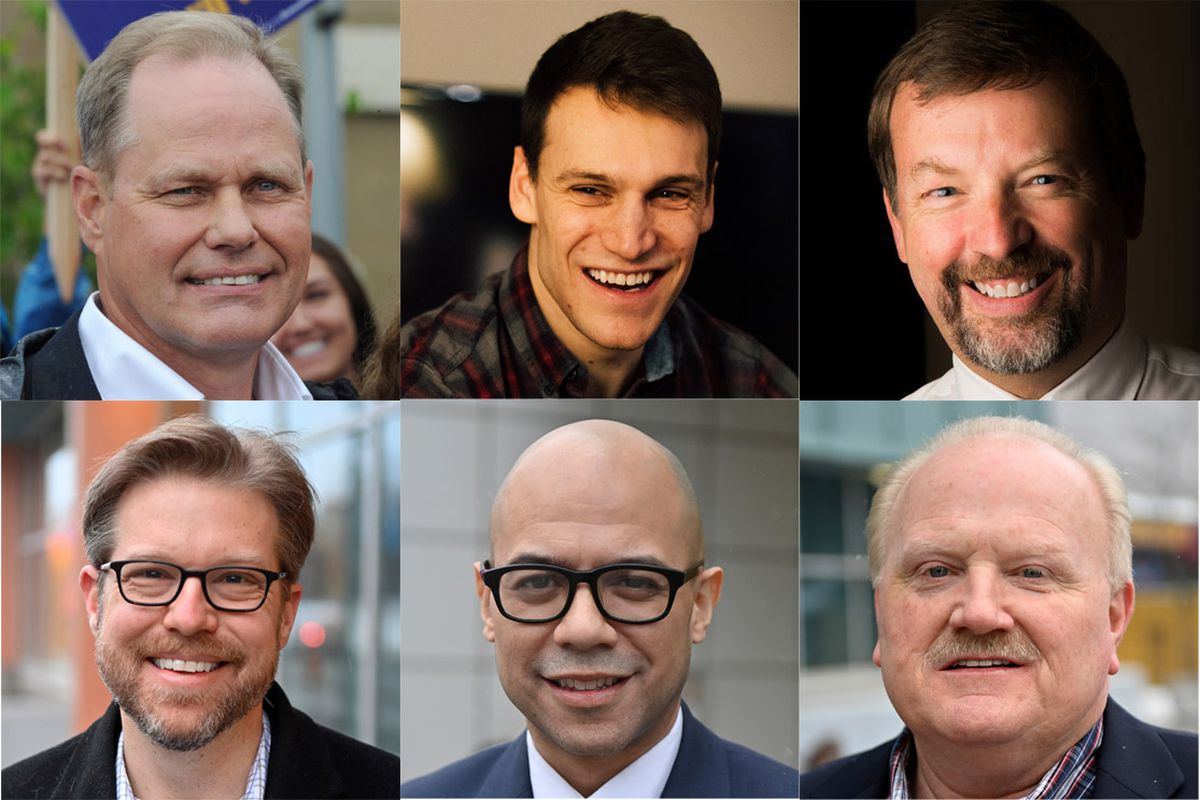 Anchorage mayoral candidate and Assembly member Forrest Dunbar has so far outraised his opponents by tens of thousands of dollars, generating a total of more than $252,000 during his campaign, according to campaign disclosures he and other candidates have filed with the state.

Mike Robbins, who officially entered the race in August 2020, has raised the second-highest amount. Robbins is trailing Dunbar by about $42,000, having raised a little more than $210,000 so far.

Robbins is a local businessman and Republican House District 26 chairman who has not previously run for office.

A few other candidates for Anchorage mayor have also raised amounts above $100,000 in a crowded, nonpartisan race that is likely to end in a runoff between two of the 15 current candidates.

Year-start reports were due to the state on Tuesday, detailing all fund donations and campaign expenditures between Feb. 2, 2020 and Feb. 1, 2021.

Dunbar officially announced his campaign in October 2019. He touted his campaign’s fundraising success in an announcement sent in early February, well before year-start reports were due.

“It’s clear from these numbers, and the endorsements we’ve received from organizations like Planned Parenthood Votes Northwest and Hawaii and the Alaska AFL-CIO, that Anchorage residents want hard-working leadership that will beat this public health crisis and get our economy back to work,” said Anna Hutchinson, Dunbar’s finance director.

Dunbar has twice been elected to the Anchorage Assembly and currently represents East Anchorage. In 2014, Dunbar ran for U.S. Congress as a Democrat against incumbent Republican Don Young and was defeated.

[In a crowded race, many candidates for Anchorage mayor say they’re aiming to make it to an expected runoff]

Candidate Dave Bronson has so far raised less than both Robbins and Dunbar, with a little more than $162,000 in total campaign funds so far, according to his report.

Dunbar last week said he sees Bronson as his biggest competitor and the candidate he will most likely face in a runoff.

Bronson announced his campaign in August of last year in a bid to bring conservative leadership to the mayor’s office. Bronson has not held public office and has strongly criticized the city’s efforts to address the COVID-19 pandemic by limiting service at businesses.

In a post to his Facebook page on Tuesday, Bronson said that “one of my opponents dumped tens of thousands of dollars to beef up his campaign report. He also spent thousands of campaign cash on ‘car repairs.’ ”

Bronson did not name the candidate in the post. A review of campaign disclosure forms shows Robbins spent some campaign money on auto repairs.

Robbins said that he reported the expenses to the the Alaska Public Offices Commission and that if the agency has any concerns, it has the chance to question his campaign about the expenditures and that he would provide “backup.”

“It would be not very smart of us to report to a government agency that’s there to watch us something that’s not correct. I mean — we wouldn’t do that,” Robbins said.

Robbins said some of his opponents have attempted on social media to “try to discredit the fact that that we had such a stellar fundraising report.”

Alaska Public Offices Commission Executive Director Heather Hebdon said in an email that it is “difficult to say whether or not the expenditures would be permissible.”

“Under the statute (AS 15.13.112), campaign funds may only be used to pay the expenses of the campaign that reasonably relate to election campaign activities. However, ‘reasonably relates to’ is not a particularly bright line that is easily identifiable and without further details about the expenditures I am not able to say whether or not the expenditures are inappropriate. At this time, all I can really say is that we will need to look into it,” she said.

Other candidates have also raised tens of thousands in funds.

Former municipal manager and current mayoral candidate Bill Falsey raised less than half of what Dunbar has, at just over $106,000. Falsey worked under former Mayor Ethan Berkowitz and Acting Mayor Austin Quinn-Davidson as municipal manager until he resigned in December to focus on his campaign, which he announced last August.

Candidate Bill Evans, a former Anchorage Assembly member, raised more than $98,000, according to his report. Evans is a self-described fiscal conservative who said he is campaigning with a nonpartisan approach to the office. Evans is endorsed by former Mayor Dan Sullivan.

George Martinez, who formerly ran as a Democrat in New York for U.S. Congress, raised just over $60,000, according to his report.

Candidate Albert L. Swank Jr. reported raising $0 so far in his year-start report. Candidate Heather Herndon in January in a monthly report said she had raised $0 so far, as did Darin Colbry.

Though year-start reports to the state state were due Tuesday, reports were not posted for several other candidates, including Reza Momin, Anna Anthony, Jeffrey Brown, Jacob Versteeg, Joe Westfall and Jacob Seth Kern.