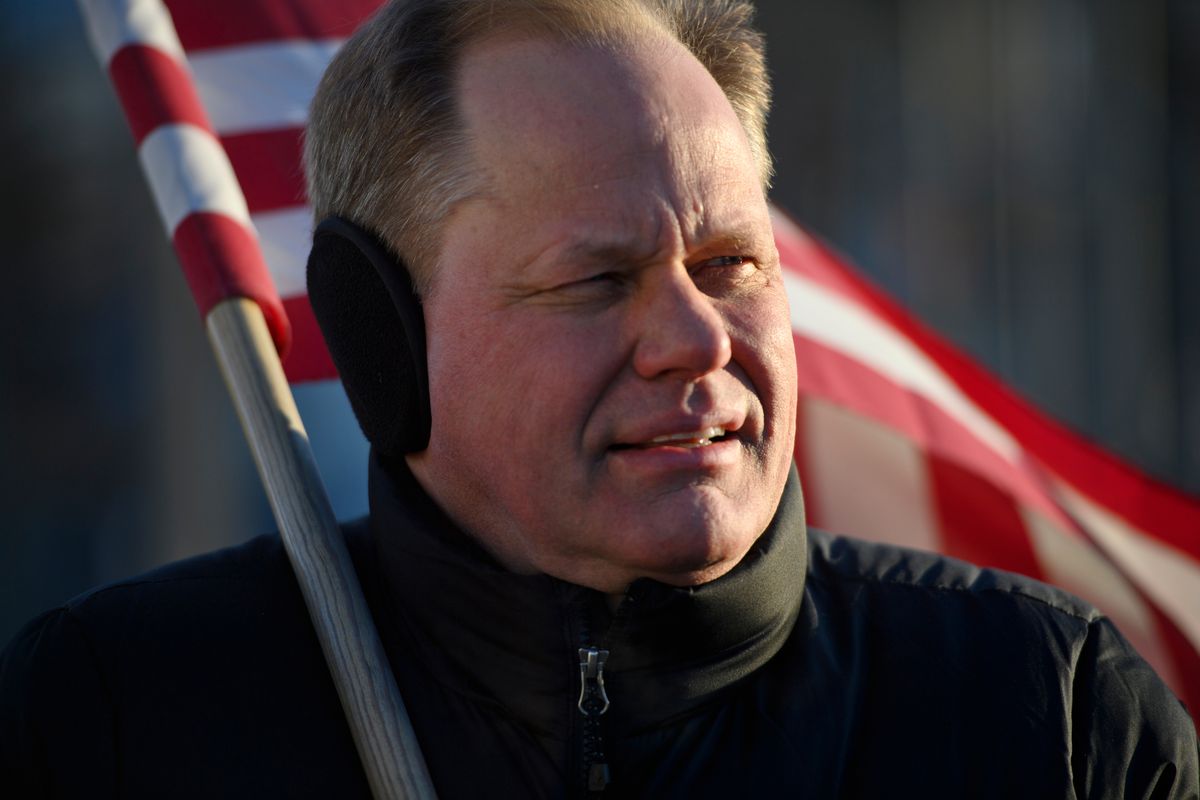 Dave Bronson, one of two remaining candidates for Anchorage mayor in the May 11 runoff, has made a series of statements downplaying the impact of the COVID-19 pandemic in Anchorage, rejecting the advice of public health experts who continue to urge precautions and warn that virus transmission rates in the city remain high.

Bronson has centered much of his campaign on criticizing the city’s handling of COVID-19 and has targeted his opponent, Assembly member Forrest Dunbar, for supporting pandemic-related restrictions.

“The pandemic moved from a health care crisis to an economic and educational crisis and the Assembly and Dunbar should have returned to business and school sooner rather than later,” he said in a statement Monday. “The long-term damage to our kid’s education and the local economy could have been avoided.”

Bronson has long said that if elected mayor, he would end all the city’s COVID-19 orders, including the mask mandate, which remains in effect after others have been revoked. Many of Bronson’s positions run contrary to the advice of public health officials.

In a recent video interview with the Daily News, he said that if elected, he wouldn’t necessarily follow the advice of the federal Centers for Disease Control and Prevention in responding to the pandemic.

“If anyone blindly follows without questioning the federal government on on some things, that’s not a good path to take,” he said. “Certainly we need to question, I think, what the CDC is telling us.”

During a televised debate last week, Bronson said that he would not take the federally approved COVID-19 vaccine “at this time,” calling it experimental. He has also said that the city is no longer experiencing a pandemic.

“This pandemic — if there was a pandemic — was over last summer,” Bronson said during a televised discussion last week hosted by Alaska’s News Source.

During an Alaska Public Media debate on Monday, Bronson walked back that statement, saying he “misspoke” by using the word “if” and that, by its definition, there “was a pandemic, certainly.”

“Certainly there’s an outbreak in India right now,” Bronson said, referring to the current deadly surge in India. " But the notion that this is a mass death event that was being claimed early last summer — it never occurred.”

In the interview with the Daily News, Bronson said he doesn’t think there is a pandemic in Anchorage because few people are dying.

One hundred and seventy-five Municipality of Anchorage residents with COVID-19 have died since the start of the pandemic, according to city data. More than two-thirds of those deaths were reported after Nov. 1.

Since the pandemic began, more than 29,000 municipal residents have tested positive for COVID-19 — nearly 800 of whom have been hospitalized.

The CDC defines a pandemic as an “epidemic that has spread over several countries or continents, usually affecting a large number of people.”

“There’s currently widespread transmission in virtually every country in the world right now, so there is a pandemic. It’s ongoing,” said Dr. Benjamin Westley, an infectious disease expert in Anchorage.

He added, “there are very high rates of community transmission in Anchorage right now.”

Anchorage remains at the high-alert risk level for COVID-19, according to state data, but the city’s case rate has dropped significantly from a peak in late 2020 that threatened to overwhelm Anchorage’s hospital capacity and spurred Acting Mayor Austin Quinn-Davidson to issue a temporary partial shutdown order. Cases in Anchorage are currently trending down.

Alaska’s COVID-19 death rate is among the lowest in the country. Westley said that’s because “we were able to mitigate transmission enough, people are spreading out enough.” The mask mandate and other precautions in Anchorage have kept the numbers low enough so that hospitals could keep up, he said.

When hospitals are overwhelmed, the death rate “goes way up” because patients aren’t attended to adequately, he said.

Still, because of Alaska’s relatively low death rate and because its hospitals have not been overwhelmed, Bronson said he believes the city should not have shut down businesses or forced them to operate at lower capacities.

Instead, it should have encouraged social distancing and isolation among the elderly and people with comorbidities, he said at the Monday debate.

Before Anchorage enacted monthlong partial shutdowns in August and December, rising case counts and shrinking ICU bed availability led health officials and hospital leaders to issue dire warnings about the need to get virus spread under control to keep hospitals from being overwhelmed. Epidemiologists describe hospitalizations and deaths as “lagging indicators” that follow trends in case rates, which is why health officials have stressed the need to act before circumstances worsen.

[Anchorage mayoral candidate Bronson says he would look at ‘cutting just about everything’ except APD, while Dunbar wants to maintain city spending]

Bronson himself, who said he has had COVID-19 and experienced long-term health effects, said he is not yet getting vaccinated.

“I am not an anti-vaxxer, but I’m not going to take an experimental vaccine at this time. However, I will not fault anyone for doing it, certainly,” he said.

The COVID-19 vaccines in the U.S. have been given emergency use authorization by the U.S. Food and Drug Administration and all have been shown to be safe and effective against the virus, according to the CDC.

Bronson said that the vaccine is a personal choice, and that those who are especially at risk, like the elderly, may want to take it. He has taken vaccines like the flu vaccine “all my life,” he said.

“The flu, quite frankly, is the best vaccination for a virus,” Bronson said.

“Bronson’s COVID-19 denial, and deliberate and ongoing promotion of dangerous misinformation present a massive step backward from the progress our community has made toward beating this virus,” Dunbar said in a recent statement.

The Anchorage Assembly — including Dunbar — last week voted to remove most COVID-19 restrictions on businesses, which took effect Monday. The sweeping change to the city’s pandemic response forwent the acting mayor’s previous goal of reaching a 70% vaccination threshold among eligible residents before removing those restrictions.

Half of the eligible population has so far been vaccinated, according to the city’s data dashboard. Meanwhile, the rate of vaccination has slowed statewide and in Anchorage.

Dunbar at the Assembly meeting said he agreed with Assembly member Chris Constant, who proposed the rollback of restrictions and said that hospitalizations and deaths have drastically decreased while vaccines have become widely available.

For months before the rollback, Bronson held events that, in photographs posted to social media, showed large groups of people socializing indoors without masks on.

On Monday, Bronson responded to a question from a listener during the Alaska Public Media debate who asked, “Why should voters support you when you didn’t follow health mandates, which are the law, and held large events?”

Bronson said that at all of his events, he provides masks, and anyone can wear a mask and that it is their individual choice to do so and to go to his campaign events.

“We didn’t compel anyone to come into our events, but they did anyway, and there was no outbreak. There were no outbreaks,” Bronson said. “So I think the data there, at least anecdotally in our case, speaks for itself.”