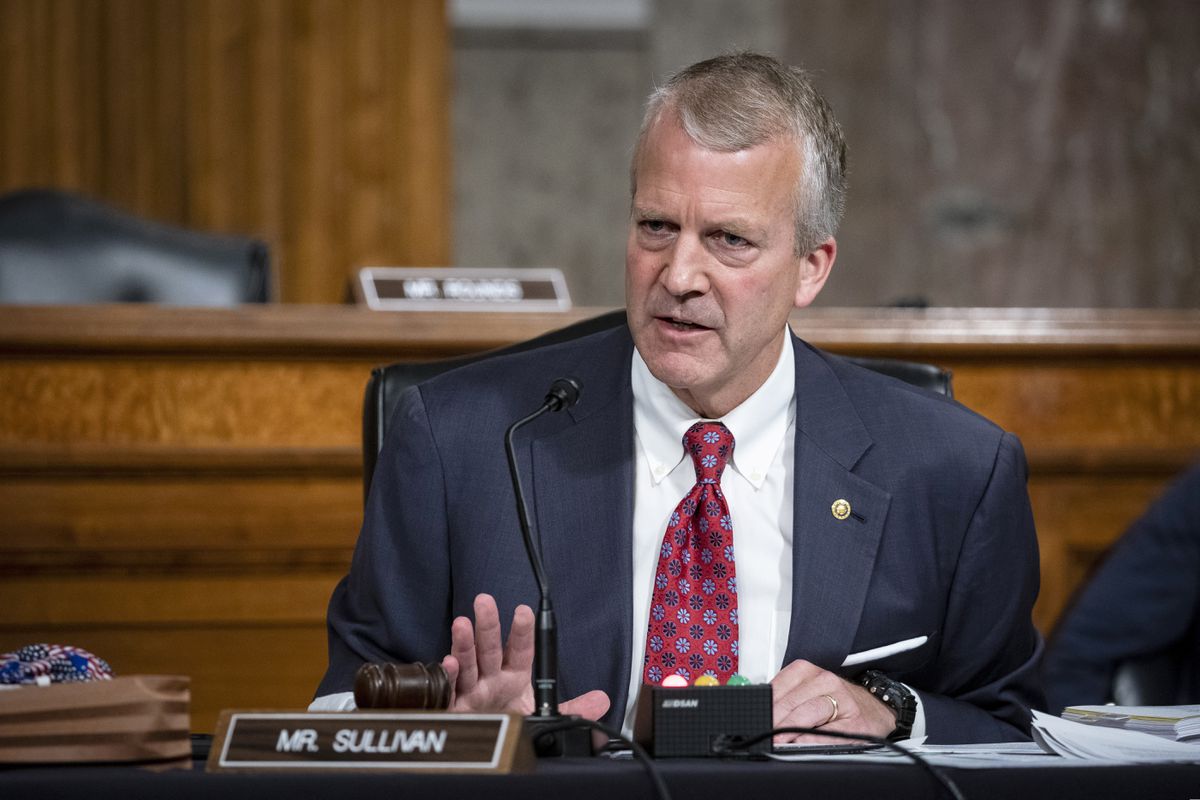 FILE - In this May 7, 2020 file photo, Sen. Dan Sullivan, R-Alaska, testifies during a hearing on Capitol Hill in Washington. Sen. Al Gross, an independent running with Democratic support, is challenging Sullivan in Alaska, a state that has long been a GOP stronghold. Across the country, Republicans are nervous about Senate seats like Sullivan's they once thought safe as Democrats hope to capitalize on President Donald Trump's unpopularity to retake the chamber. (Al Drago/Pool via AP, File)

FILE - In this May 7, 2020 file photo, Sen. Dan Sullivan, R-Alaska, testifies during a hearing on Capitol Hill in Washington. Sen. Al Gross, an independent running with Democratic support, is challenging Sullivan in Alaska, a state that has long been a GOP stronghold. Across the country, Republicans are nervous about Senate seats like Sullivan's they once thought safe as Democrats hope to capitalize on President Donald Trump's unpopularity to retake the chamber. (Al Drago/Pool via AP, File)

It’s the race you’ve already heard far too much about: Sen. Dan Sullivan facing off against challenger Dr. Al Gross. In the ugliest race — and one of the costliest — to fill a U.S. Senate seat in Alaska history, the attack ads have been loud, frequent and often fast and loose with the facts.

Here’s some straight talk: In six years in office, Sen. Sullivan has been relentless in advocating for the development of Alaska’s resources, development of its infrastructure, support of its military and funding for its unique challenges. In that time, he’s been a necessary voice in promoting Alaska-specific legislation and priorities that might otherwise have fallen into limbo, and has been a key member of our three-person delegation all while continuing to serve as a Marine. His record on resource development issues, from oil and gas to mining and fisheries, has been strong. He’s taken the lead on bills dealing with Alaska’s epidemics of sexual violence and domestic assault, as well as the war against opioid abuse. And he was a prime sponsor of the Save Our Seas 2.0 Act, a bipartisan effort to combat plastic waste in ocean waters.

That said, he’s also seen by some as a party man and often he is, for good and for ill. Usually, the Republican agenda has aligned with Alaska’s interests, such as in the push to open the Arctic National Wildlife Refuge’s 1002 Area to oil leasing, or the development of the King Cove road. Those were key areas where Sen. Sullivan carried the ball for Alaska and got things done. But at other times, he has hesitated to stand up to President Donald Trump or party leadership when their agenda is at cross-purposes to Alaska’s, such as when President Trump usurped $100 million slated for important Alaska military projects and reallocated it to the construction of a border wall with Mexico. If he succeeds in this campaign, Sen. Sullivan should do more to buck the party line when it’s not what’s best for Alaska.

Dr. Gross is a credible challenger, a lifelong Alaskan with deep roots in state affairs — his father, Avrum Gross, was the state attorney general under Gov. Jay Hammond, and his mother helped found the Alaska chapter of the League of Women Voters. There’s no question that Dr. Gross wants what’s best for Alaska, and he has worked in health care and public health policy toward that end. He has sharp differences with Sen. Sullivan on his record, and the bitter nature of the campaign has reflected that. Dr. Gross has also tried — and failed — to convince Alaskans that he’s an independent who won’t be beholden to either party if elected. A true independent would work with whichever party is in the majority in order to advance Alaska’s agenda, and Dr. Gross has committed to joining the Democrats even if they are in the minority. From that position, it would be impossible for him to do the work Alaskans need done.

Dr. Gross’s policy knowledge in a specific area — health care — is outweighed by the breadth of Sen. Sullivan’s demonstrated record, as the latter has served as a commissioner of Alaska’s Department of Natural Resources as well as the state’s attorney general before becoming a U.S. senator. That expertise has served our state well in Washington, D.C., and it should continue to, even if Democrats regain the majority in the Senate this election.

Sen. Sullivan’s record during the past six years is solid; he has championed Alaska’s priorities and worked to address some of the state’s most pressing problems. If elected to a second term, we look for him to come into his own and speak out when his party’s agenda doesn’t jibe as strongly with the state’s interests. Alaskans should feel confident in returning Dan Sullivan to Washington, D.C. to continue the good work he’s started.

[On editorials and endorsements]