‘She wants to beat everyone:’ Competitive spirit propels Anchorage runner Anna Dalton to the US Olympic marathon trials 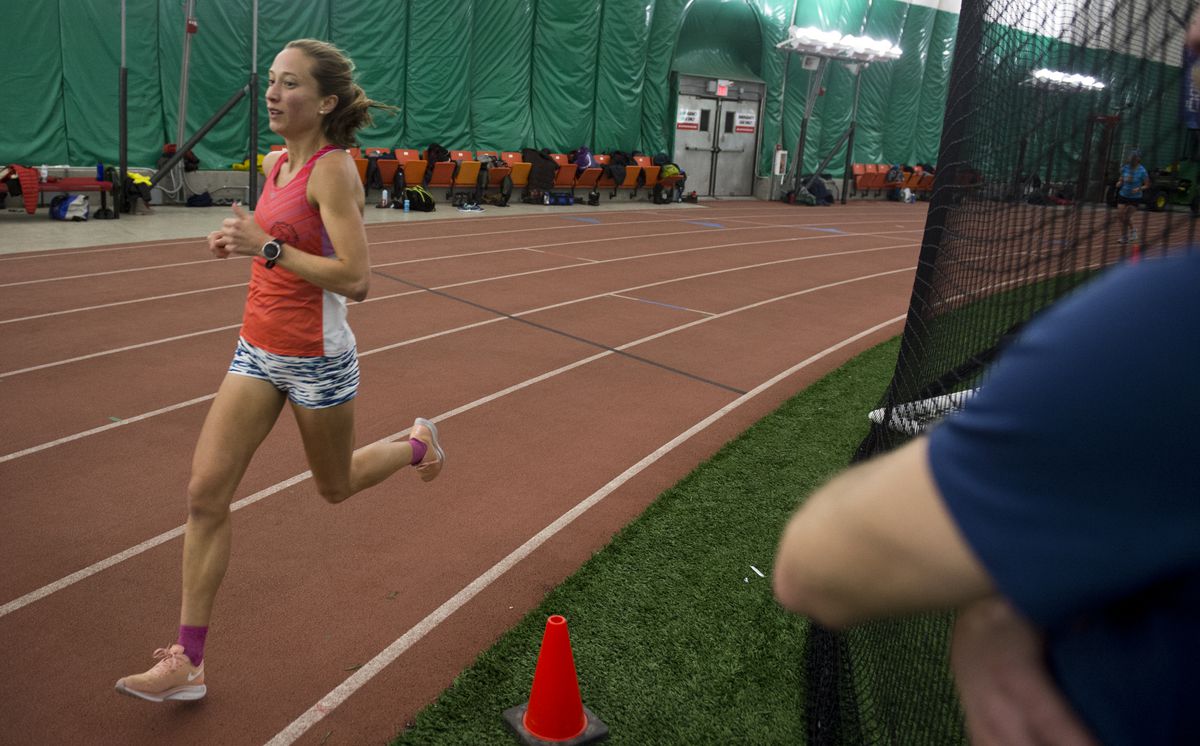 Anna Dalton trains at The Dome while Todd List of the Alaska Endurance Project calls out her split times. (Marc Lester / ADN)

Anna Dalton trains at The Dome while Todd List of the Alaska Endurance Project calls out her split times. (Marc Lester / ADN)

It was 1995 and Dalton was a kindergartner running the Alaska Run for Women with her mom. At some point during the race, a loose front tooth became a lost front tooth, and when Dalton reached the finish line and realized she had no tooth to offer the Tooth Fairy, she was devastated.

“I made my mom retrace a good chunk of that course” looking for the tooth, Dalton said. “I wrote a note to the Tooth Fairy and said, ‘I lost a tooth during this race but I still beat my mom so please don’t forget me.’ ’’

Competitive even at age 5 — she remembers beating her mom that day as much as she remembers losing her tooth — Dalton has parlayed years of determination into a spot in Saturday’s U.S. Olympic marathon trials in Atlanta.

On her way to the biggest race of her life, Dalton, a 2008 West High graduate, lost a season to concussions and endured a couple of seasons when she was limited by anemia. But she never gave up on her dream of making it to the Olympic trials.

“I started thinking of that as a goal in 2014, 2015,” Dalton said. “I was in Leadership Anchorage and we did a pretty intensive goal-setting session and had to verbalize our goals to the group. (I said) I wanted to qualify for the Olympic trials by the time I was 30.”

Mission accomplished. Dalton was 29 when she met the U.S. Olympic trials qualifying standard of 2 hours, 45 minutes at the 2018 California International Marathon by running a personal-best time of 2:44:18 seconds. She’s 30 now, one of 511 women who qualified to race Saturday for the three spots up for grabs in this summer’s Tokyo Olympics.

Dalton was an excellent 800-meter runner at West High who went on to run track and cross country at Division III Occidental College in California. But by her final year of college, she was running less than ever.

“My senior season ended with me being incredibly anemic and I had to stop the track season midway through. My iron was way too low to be running,” she said. “It was sort of over at that point. I came back (to Anchorage) and I wasn’t running and I was really out of shape.”

[This Anchorage runner’s training is unorthodox, but it’s sending him to Olympic marathon trials feeling fit and fast]

During her first few months back home after graduating from college in 2012, Dalton entered a Tuesday Night Race Series community run and discovered there was nothing anemic about her competitive drive.

“What really catalyzed it for me was there was this guy I dated in college who I had broke up with, and he beat me at a Tuesday Night race,” she said. “I thought, ‘Oh my god, he’s beating me — that’s not OK.’ I’ve always been very competitive, but at that moment I decided I need to get fit.

“It wasn’t just his beating me, but also getting my butt kicked by others at those races.”

Soon she was training with the Alaska Endurance Project running group and thinking about marathons. By the summer of 2013, Dalton was back in race shape and one of Alaska’s top road racers. She won the 2013 Mayor’s Marathon at age 23 and later that year placed 44th among women at the New York City Marathon.

“After that I thought, ‘OK, maybe I could be OK with (marathon running),” she said. “Even in college I always could handle more miles than most of the other girls on my team. I maybe got up to 60, 70 miles a week, which was high for a Division III program. I always liked running a lot and my body can handle the volume, so the marathon sounded appealing.”

Over the years she increased her volume. She averaged 90-mile weeks in January before beginning to taper in advance of Saturday’s race.

In January, she recorded a personal-best time in the Houston Half Marathon in Texas, where she took two minutes off her previous best at the 13.1-mile distance with a time of 1:17:05. She stayed in the Lower 48 for several days to train with a couple of other Alaskans, including Chad Trammell, an ultrarunner from Anchorage who coaches Dalton.

Trammell said Dalton’s half-marathon performance came at a critical time for her.

“I think maybe she was doubting her fitness because of lot of her workouts have been outside in bad conditions,” he said. "You can’t fake a half marathon, so I think that has put her mind at ease.”

Dalton spends some of her time in Bozeman, Montana, where her boyfriend Matt Johnson, a Service High graduate, is the cross-country ski coach at Montana State University. Her job as the director of grants and programs for the Alaska Conservation Foundation allows her to work remotely, and when she’s in Bozeman she has access to MSU facilities, she’s at altitude, and the snow melts faster on the roads than it does in Anchorage.

For all that, she prefers training in her home town, where she has the support of United Physical Therapy, a longtime sponsor that pays her race entry fees, and a whole lot of training partners.

“I have so many people to run with here,” she said. “I’ll take the company over the altitude any day. There’s always at least a handful of people who are absolutely up for running with me and who are up to my pace.”

Dalton has twice dueled Olympic cross-country skier Rosie Brennan at the annual Alaska Run for Women, the same race where Dalton lost a tooth 25 years ago. In 2018, Brennan set a course record in the 5-mile race by beating Dalton by four seconds. In 2019, Dalton got redemption by beating Brennan by two seconds.

Trammell said that in the year between those races, the mere mention of the Run for Women propelled Dalton through difficult training days. She wants to beat everyone, he said.

“Anyone who knows Anna knows she’s one of the most competitive people around,” Trammell said. "As someone who coaches her one of the main challenges is knowing that if she’s doing a workout with other people, getting her to hit the paces is almost impossible if (she’s training with) someone who’s faster, because she’s so competitive.

The course in Atlanta is hilly, and Trammell said that’s a good thing for Dalton. In 2016, she hardly ran at all because of two concussions — one that happened when she was mountain biking with Johnson and was tossed over her handlebars and onto her head, and another a couple of months later when she got sideswiped while driving and hit her head again.

The next year she was able to run again but was wary of road racing.

“I lost a ton of fitness — I lost a whole year in terms of quality training,” she said. “I didn’t want to go back to the roads because I didn’t want to compare myself (to her previous times).”

And so that summer Dalton turned to the mountains. She placed ninth at Mount Marathon, fourth at Montana’s Run the Rut 50K and fourth at the USA Track & Field trail marathon championships in Utah. Trammell figures there will be few women in Saturday’s race with more mountain running experience than Dalton.

Dalton said she liked her summer of mountain running and thinks there will be more ultra trail runs in her future. First, however, there is business to take care of Saturday. NBC (Channel 2) will provide live coverage of the race, which starts at 8 a.m. AST for the men and 8:10 a.m. AST for the women.

Many runners are coming into the race with faster PRs, and Dalton does not imagine herself standing on the podium at the end of the day.

“I think the goal is to run a smart first half and pass as many people as I can in the second half,” she said. "I qualified just barely under that standard, so there are a lot of women ranked ahead of me. I’d like to finish well ahead of where I was ranked.

“The reality is women’s running in this country is at a level it’s never been before, and it’s awesome to be a part of that. But in order to be on the Olympic team, my heroes would all have to break an ankle, all on the same day.”