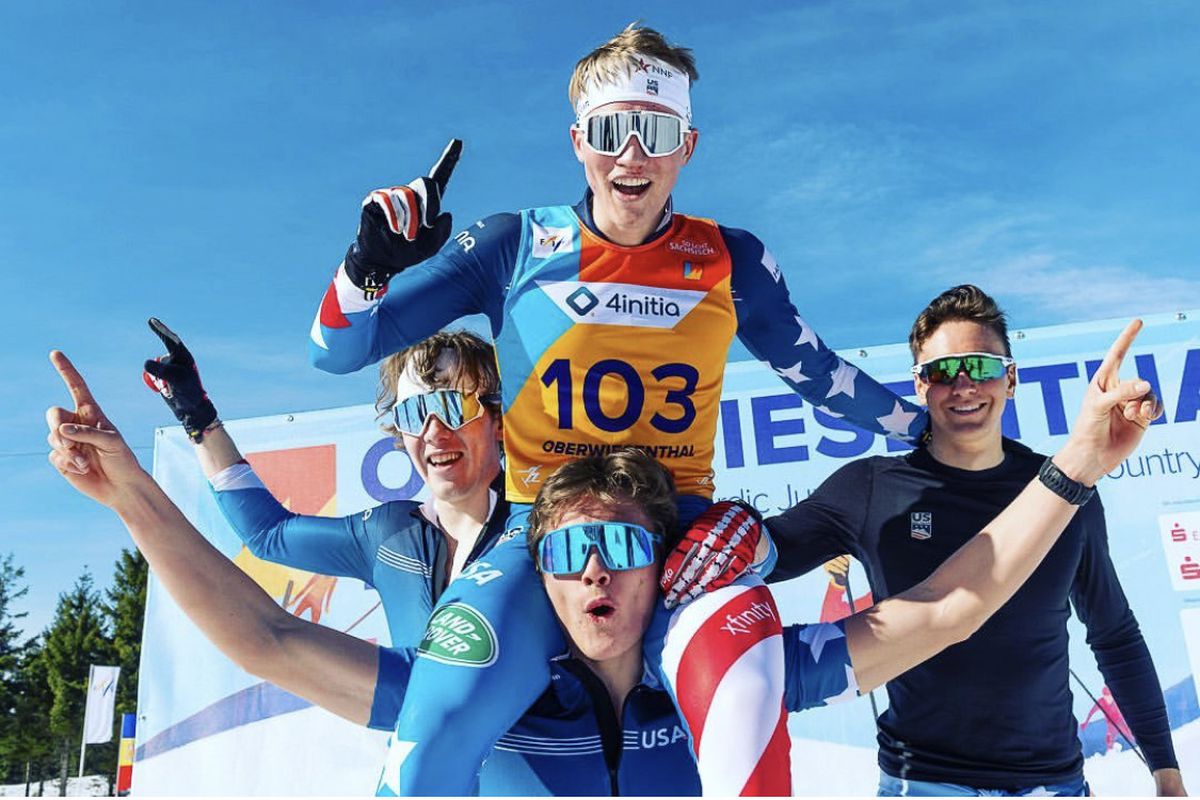 Luke Jager of Anchorage hoists Gus Schumacher of Anchorage on his shoulders after Schumacher won gold at the World Junior Championships in Germany. Teammates Ben Ogden (left) and Johnny Hagenbuch join in the celebration. (Photo by Steve Fuller / flyingpointroad.com)

Luke Jager of Anchorage hoists Gus Schumacher of Anchorage on his shoulders after Schumacher won gold at the World Junior Championships in Germany. Teammates Ben Ogden (left) and Johnny Hagenbuch join in the celebration. (Photo by Steve Fuller / flyingpointroad.com)

On May 1 last year, 19-year-old Gus Schumacher wrote prophetic words at the top of his training log: “Win World Juniors.”

Schumacher unleashed a furious finish to win the 10-kilometer classic race Monday in Oberwiesenthal, Germany. Down 4.1 seconds to the leader with 1.6 kilometers left, he crushed it the rest of the way to win by 4.5 seconds.

“My thoughts are all over the place today,” Schumacher said by email. "Winning World Juniors has been a goal of mine explicitly for about 3 years but it’s essentially a culmination of everything I’ve done in the past 10 years.

"... Along that path there have been so many people to help me, and none that deserve a piece of this win more than my American and Alaskan teammates, who’ve worked hard alongside me for so many years and who I’ve leaned on for support so often in the past. And all of my coaches, especially Jan Buron and Bernie Nelson, who have also both invested so much in these races."

Schumacher, an Alaska Winter Stars skier and Service High graduate, was the last of 103 skiers to begin the interval-start race.

He had the third-fastest split time midway through, trailing leader Friedrich Moch of Germany by 8.7 seconds. By the time he was done, Schumacher had gained more than 13 seconds on Moch, who took the silver medal.

Schumacher finished in 26 minutes, 31.7 seconds. Moch was 4.5 seconds behind him and bronze-medalist David Graz of Italy was 6.7 seconds back.

Schumacher was part of a great day for the American men, who landed three skiers in the top 10. Ben Ogden of Vermont was ninth, 49.8 seconds behind Schumacher, and Luke Jager of Anchorage was 10th, 50.5 seconds back.

In the women’s 5K, Kendall Kramer of Fairbanks finished 22nd and was the second American finisher. She was nearly a minute off the winning pace set by Helene Marie Fosseholm of Norway.

Schumacher’s victory is a milestone for U.S. skiing, which 20 years ago struggled to put a skier in the top 30 of a World Cup race. Sparked by the groundbreaking success of Anchorage’s Kikkan Randall, who won multiple World Cup medals leading up to her gold medal at the 2018 Winter Olympics, American women have become dominant skiers on the world scene in the last several years or so.

The U.S. men have lagged behind but have also been making noise, especially at the junior level, where Schumacher and Jager were parts of medal-winning relay teams at the last two World Juniors (silver in 2018, gold in 2019).

“To have 1 skier in the top ten 20 years ago was a dream,” said Anchorage’s Joey Caterinichio, the president of the National Nordic Foundation and the former nordic director for U.S Skiing & Snowboarding. "To have 3 skiers in the top 10 ... and a gold medal is not just success, it is a force.

“The USA has joined the top nordic nations such as Norway, Germany and Sweden now at all levels and is here to stay.”

For Schumacher, Monday’s victory was all part of a plan, and a progression. This is his third and final appearance at the World Juniors, and at his two previous championships he came home with medals from the men’s relay race.

This year, he went into the race series aiming to win an individual medal.

He served notice on Saturday that he was primed to deliver. He was the top qualifier in that day’s freestyle sprint and went on to win his quarterfinal race, but in his semifinal he got boxed in behind a couple of skiers and failed to make it to the finals by a fraction of a second. He wound up placing seventh overall.

The disappointment motivated him, Schumacher said on Saturday, and on Monday he got the gold medal he has long worked for.

“To be the first American junior world champion is a dream come true, and I mean that literally in that I’ve visualized this situation countless times in my head to make myself believe in it,” Schumacher said.

“For it to happen finally, especially after an early end to the sprint day on Saturday feels very fulfilling, and makes me realize I need to look ahead and around, and think about where we as a group of guys want to go with it.

"The only thing that would make this week better would be for my teammates to also win, to show how strong we are together.”

At previous World Juniors, Schumacher and Jager helped the U.S. men to a silver medal in the 2018 relay race -- a team that also included Anchorage’s Hunter Wonders, who is competing in this week’s U-23 championships in Oberwisenthal -- and gold in the 2019 relay race, when Schumacher’s come-from-behind anchor leg lifted the Americans to victory.

In individual races at last year’s championships, Schumacher posted two results that, at the time, were among the highest finishes in history for an American man at the World Juniors — fourth place in the 30K classic and sixth place in the 10K freestyle.

Schumacher’s triumph is rooted in Alaska, where he has long trained with Jan Buron with the Alaska Winter Stars. He follows a long line of Alaska skiers who have been among the country’s best, and some who were or are among the world’s best.

At the 2018 Olympics, half of Team USA’s 20-member cross-country ski team was made up of Alaskans, a group that included Sadie Bjornsen and Rosie Brennan, who are tearing it up this season on the World Cup circuit.

Alaska skiers benefit from strong local programs, outstanding trail systems and a world-class race venue in Kincaid Park, said Caterininchio, who is also the president of the Nordic Skiing Association of Anchorage.

“Alaska is one of the best venues to build world-class cross-country skiers,” she said. “From Junior Nordic, middle school, high school, clubs, races, events, opportunity and hosting national races, it is all working.”