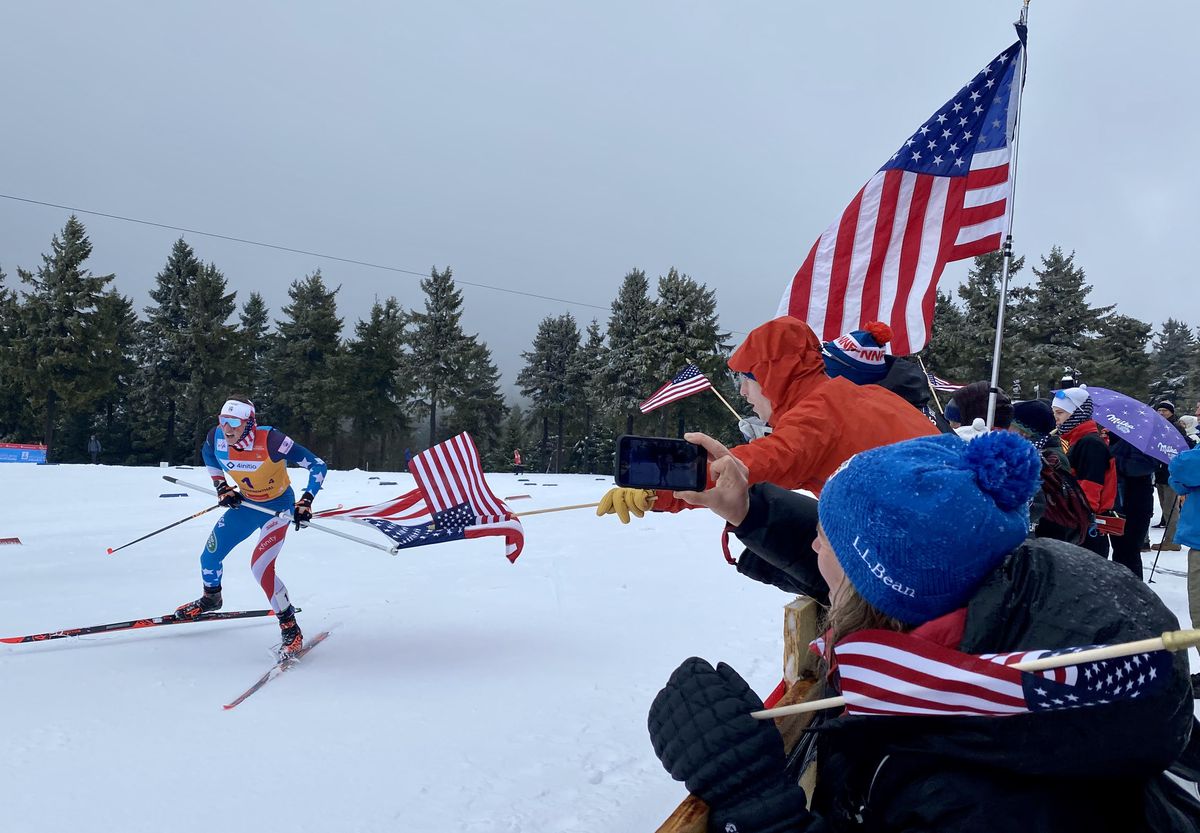 Alaska skier Gus Schumacher closes in on the finish - and a first-place finish - at the World Junior Championships in Oberwiesenthal, Germany on Friday. (Jim Jager)

Alaska skier Gus Schumacher closes in on the finish - and a first-place finish - at the World Junior Championships in Oberwiesenthal, Germany on Friday. (Jim Jager)

Anchorage skiers Gus Schumacher and Luke Jager propelled the United States to such a landslide of a victory in the men’s relay Friday at the World Junior Championships that Schumacher didn’t even use his poles in the final stretch of the race.

He wasn’t able to.

Someone handed him a huge American flag with about a hundred meters to go in the 4x5-kilometer race and Schumacher gripped it horizontally in front of him with both hands as he skied across the finish line, where his ecstatic teammates awaited him.

It was all part of a monumental day for American skiing. For the first time in the 43-year history of the World Junior Championships, the United States won medals in both relay races in Oberwiesenthal, Germany.

In the women’s 4x3-kilometer relay, Kendall Kramer of Fairbanks helped the United States win a silver medal. The team’s second-leg skier, Kramer was in third place when she started and second place when she finished.

It was the second relay medal for the U.S. women, who claimed bronze at the 2017 World Juniors.

It was the third straight medal for the men, who have won three in a row behind Schumacher, Jager and Vermont’s Ben Ogden. The three teamed up with Hunter Wonders of Anchorage to take the silver medal in 2018, and they won gold last year and this year with Johnny Hagenbuch of Idaho.

“We put a lot of pressure on ourselves to win, and that’s the only thing we would have been satisfied with today,” Schumacher said during an online broadcast of the race.

A year ago, the group beat Russia by 3.8 seconds behind Schumacher’s come-from-behind anchor leg . Friday, they beat second-place Canada by 35.5 seconds behind Jager’s sizzling scramble leg.

Jager, a member of the Alaska Pacific University ski program, forged an insurmountable 25.2-second lead in his classic-technique leg.

Ogden built it to 30.8 seconds with the second classic leg, and Hagenbuch pushed it to 33.6 seconds with his freestyle leg before Schumacher -- the top skier of the World Juniors with two gold medals in four races -- took over.

“Those boys exceeded my expectations in a big way,” Schumacher said by email. “They’ll say they had great skis and that’s why they were able to splinter a stacked field, but really these boys are some of the best skiers in the world and when it comes together perfectly (which it seems to (do) often on relay day), there’s not much match for them.”

Schumacher, an Alaska Winter Stars skier, stretched the lead to more than 45 seconds with less than 1,000 meters left in his freestyle leg, but he was slowed considerably once a spectator handed him a U.S. flag with 100 to 200 meters to go.

The Americans won with a time of 54 minutes, 54.9 seconds. Several teams battled for second place behind them, with the surprising Canadians -- who were 11th in this race a year ago -- breaking loose from the chase pack with a kilometer or two to go to beat third-place Italy by 20 seconds.

The gold medal cemented Schumacher’s status as the top man in the race series, which showcases the world’s best skiers under 20.

Earlier in the week he won the 10-kilometer classic race to become the first American to win a gold medal at the World Juniors. He was the top qualifier in the freestyle sprint race, where he placed seventh overall after getting knocked out in the semifinals, and he finished fifth in the 30K mass start.

Kramer had top-25 results in her two individual races (22nd in the 5K classic and 24th in the 15K freestyle) to earn a spot on the women’s relay team. The Americans were in third place after Idaho’s Sydney Palmer-Leger skied the scramble leg, and Kramer lifted them in second place. Sophia Laukli of Maine and Novie McCabe of Washington kept the team in the silver-medal position with their freestyle legs.

The trip to Germany for the World Juniors marked Kramer’s second trip to Europe this year for a major international competition. In January, she won a bronze medal in the 5K classic at the Winter Youth Olympics in Lausanne, Switzerland.

In between her trips to Switzerland and Germany, Kramer won her third consecutive Skimeister award at the Alaska state high school championships at Kincaid Park.