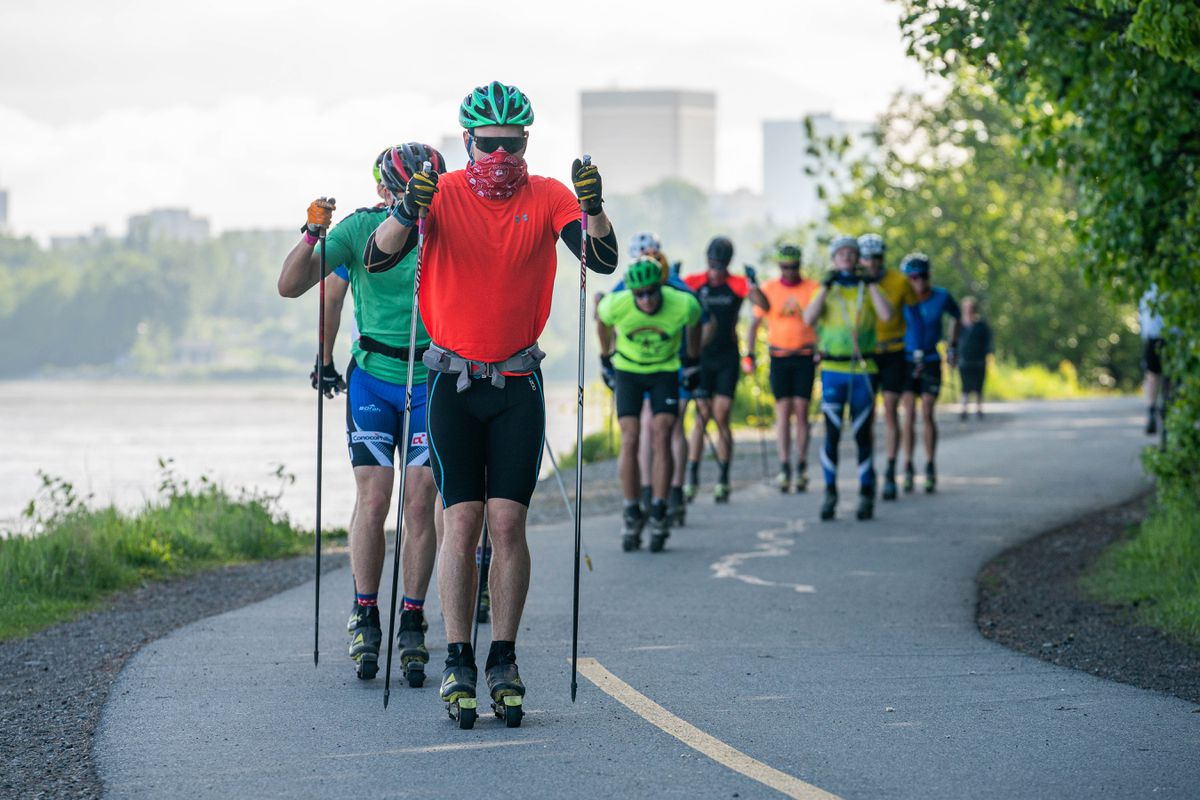 When a group of 26 skiers from Alaska Pacific University’s nordic ski program paused at Kincaid Park during a Wednesday morning rollerski across Anchorage, a photographer asked those who had ever qualified for a World Cup race to gather for a picture.

Rosie Frankowski, a 2018 Winter Olympian, was one of them, and she was wowed by how much company she had. Less than a generation ago, there were years when the entire U.S. Ski Team put fewer people on the World Cup circuit.

APU is a breeding ground for Olympians and World Cup skiers, and Wednesday morning’s rollerski fundraiser raised more than $34,000 that will help pay for training and travel for members of the elite team during the 2020-21 season. Some of the money will also help pay for safety vests and gear for the team to wear in the offseason while roller skiing.

“Boulevard to Beijing,” skier Luke Jager called it, a reference to the 2022 Winter Olympics in China.

The event replaced APU’s usual end-of-season fundraiser — a silent auction canceled because of the COVID-19 pandemic.

A majority of the men and some of the women used the classic technique, which meant they double-poled for most of those 50 kilometers. Not an easy task, “but that’s why we’re out there doing it,” Logan Hanneman said.

Though they didn’t move at race pace, they couldn’t hold back as they neared the finish at APU’s Atwood Center, where Moose’s Tooth pizza awaited.

Said Hanneman: “The last hour, me and a few of the others picked the pace up.”

Said Jager: “There wasn’t really a sprint but a lot of us were really hammering for a few minutes at the end.”

Said Frankowski: “At the end we wanted to be done and get some Moose’s Tooth. Everybody was pretty hungry.”

No one paid close attention to who finished first. 2018 Olympian Scott Patterson thought Hanneman did, “though Hunter Wonders may have been the first one with a slice of pizza in his hands.”

[APU’s Hannah Halvorsen had big plans for the season. Getting hit by a car changed them]

The day marked the first gathering of APU’s elite team since last season, which ended prematurely because of the pandemic. Among the participants was Hannah Halverson, who was hit by a car last year and is coming back from serious injuries.

After quarantining for weeks, the skiers are training together again but not in large groups.

“We’ve been splitting up, women and men,” Hanneman said. “It was fun to see everyone all together.”

[APU skiers hunker down together on campus]

The group’s fundraising goal was $50,000, and although that figure wasn’t reached (donations are still being accepted), Frankowski was happily surprised by the $34,000 total.

“I was shocked,” she said. “I work in fundraising in the nonprofit world, and with COVID going on, I didn’t have much faith — there’s a pandemic going and people are losing their jobs. It’s really amazing to see the community come forward. It makes you feel good to see that support.”

Aided by that support, APU sent 10 skiers to the 2018 Winter Olympics — including gold medalist Kikkan Randall — and placed eight on the 2020-21 U.S. Ski Team.

When Wednesday’s rollerski group took a planned break at Kincaid Park, photographer Reese Hanneman — Logan’s brother and a 2018 Winter Olympian who has since retired from World Cup skiing — got all of the World Cup qualifiers together for a photo.

“It was cool to see just how large this group was,” Logan Hanneman said. “We train together every day, but when you take a step back like that and see that all those people have qualified to race on the biggest stage — it’s impressive.”