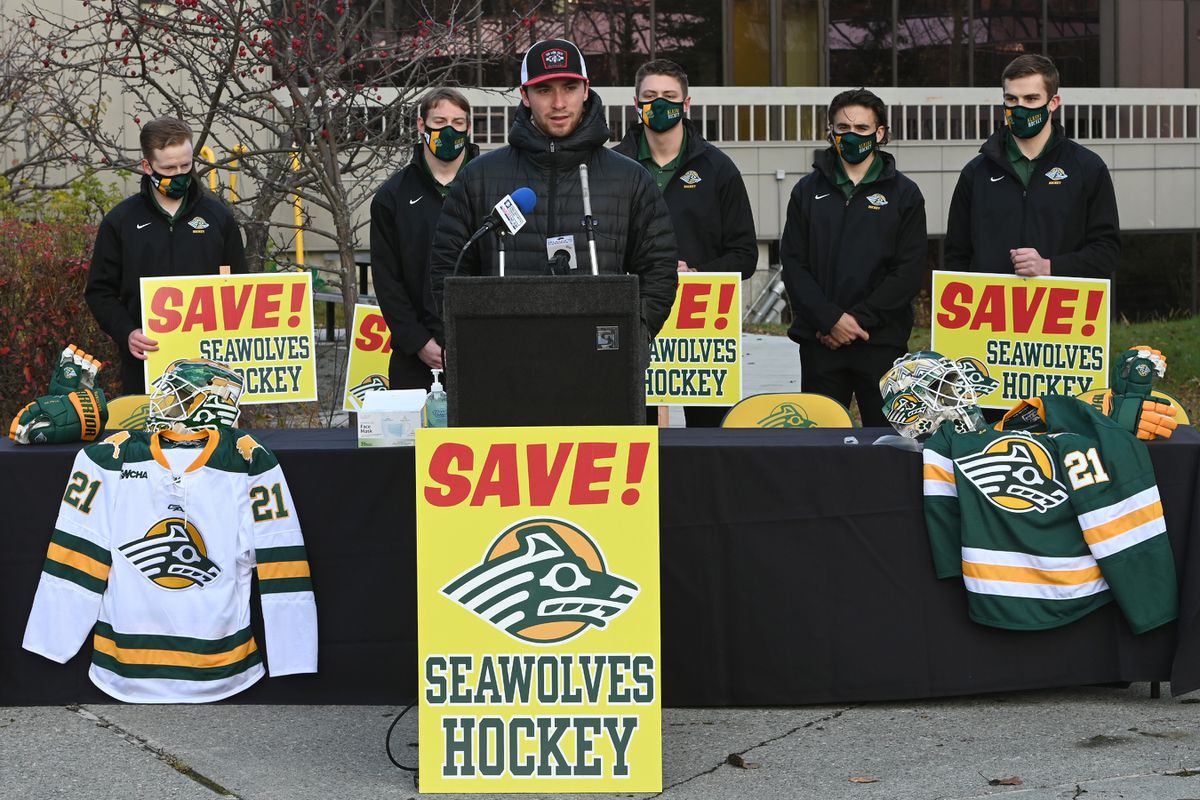 Jeremy Swayman of Anchorage traveled nearly 4,500 miles from home to play college hockey, but on Monday he was all about the hometown team as he stood in front of the Seawolf Sports Complex.

Currently Alaska’s brightest hockey prospect, Swayman was one of several speakers at a Monday press conference announcing the formal launch of Save Seawolf Hockey, a fundraiser organized by UAA hockey boosters, alumni and others in the hockey community.

The hockey program has until February to raise $3 million — enough to cover two years of operating expenses — and avoid being eliminated by the University of Alaska’s Board of Regents.

If fundraising falls short, this will be the team’s final season.

Swayman, who signed a three-year contract with the Boston Bruins in March, didn’t play at UAA. But he credited the program for instilling in him a love of hockey, especially college hockey. As a senior goaltender last season at the University of Maine, Swayman was the Hockey East Player of the Year and a finalist for the Hobey Baker Award, given annually to the top player in college hockey.

“They’re the reason why I started to play hockey and chose the college route. I wouldn’t be in the position I am without UAA hockey,” Swayman said.

Hearing about the team’s potential demise “really broke my heart,” he said.

[As he waits to join Boston Bruins, Jeremy Swayman trades pucks for peaks]

Established in 1979, the UAA hockey team has long been a pipeline for players who come north to play and then decide to stay. Many wind up back in hockey as coaches. From Dennis Sorenson to Keith Morris to Matt Shasby, dozens of UAA alumni have coached and mentored thousands of youth players in Anchorage.

“I grew up in Anchorage and most of my coaches were ex-UAA players,” Anchorage firefighter Joey Crabb said. "I went on to play in the NHL and I give a ton of credit to those ex-UAA players.

“It’s pretty evident our local youth hockey would suffer for it. There’s no other avenue with the Aces being gone for that top talent to into the community.”

In August, UAA chancellor Cathy Sandeen proposed to cut hockey, skiing and gymnastics as part of the school’s response to deep cuts to state funding. The proposed cuts would have saved about $2.5 million a year.

At a September meeting of the Board of Regents, board members decided to keep cross-country skiing but eliminate alpine skiing, hockey and gymnastics. But the cuts came with a life preserver — if the programs can raise enough donations and pledges to cover two years’ of operating costs, the board will consider reinstatement.

Of the three sports, hockey faces the biggest challenge. It needs to raise $3 million, while gymnastics must raise $880,000 and the alpine ski team $628,000.

“We’re not looking just to save the program, we’re looking to sustain it,” said Kathie Bethard, the chairwoman of Save Seawolf Hockey.

So far, Bethard said, hockey supporters haven’t found they are competing with skiing or gymnastics for donations. Some 10,000 players, coaches and officials are registered with the Alaska State Hockey Association, Bethard noted, and that’s a lot of potential donors.

In 2017, fans of the Kenai Brown Bears raised $300,000 in one month to save the junior team that plays in the North American Hockey League. And earlier this year, supporters of the University of Alabama-Huntsville — which plays with UAA in the Western Collegiate Hockey Association — raised more than $750,000 in two weeks to save that team.

Huntsville benefited from $250,000 in gifts from two former players who went on to play in the NHL. The Brown Bears were able to sell a lot of season tickets as part of their money-raising efforts, Bethard said, but that’s not a lucrative prospect for the UAA effort. Since leaving Sullivan Arena after the 2018-19 season, the Seawolves have played games at the small Seawolf Sports Complex ice rink that seats about 800.

Among Monday’s speakers was UAA coach Matt Curley, who is entering his third season with the Seawolves. He and five players — four of them from Alaska — came to the outdoor press conference straight from a preseason workout at the UAA rink.

“As we get going again, as we build toward the next few months, we have to ask what would be lost if we go away in February,” Curley said. “Selfishly, I’d like a few more years to a part of it. This is something worth fighting for, something worth saving, and I encourage all of you to be a part of it.”