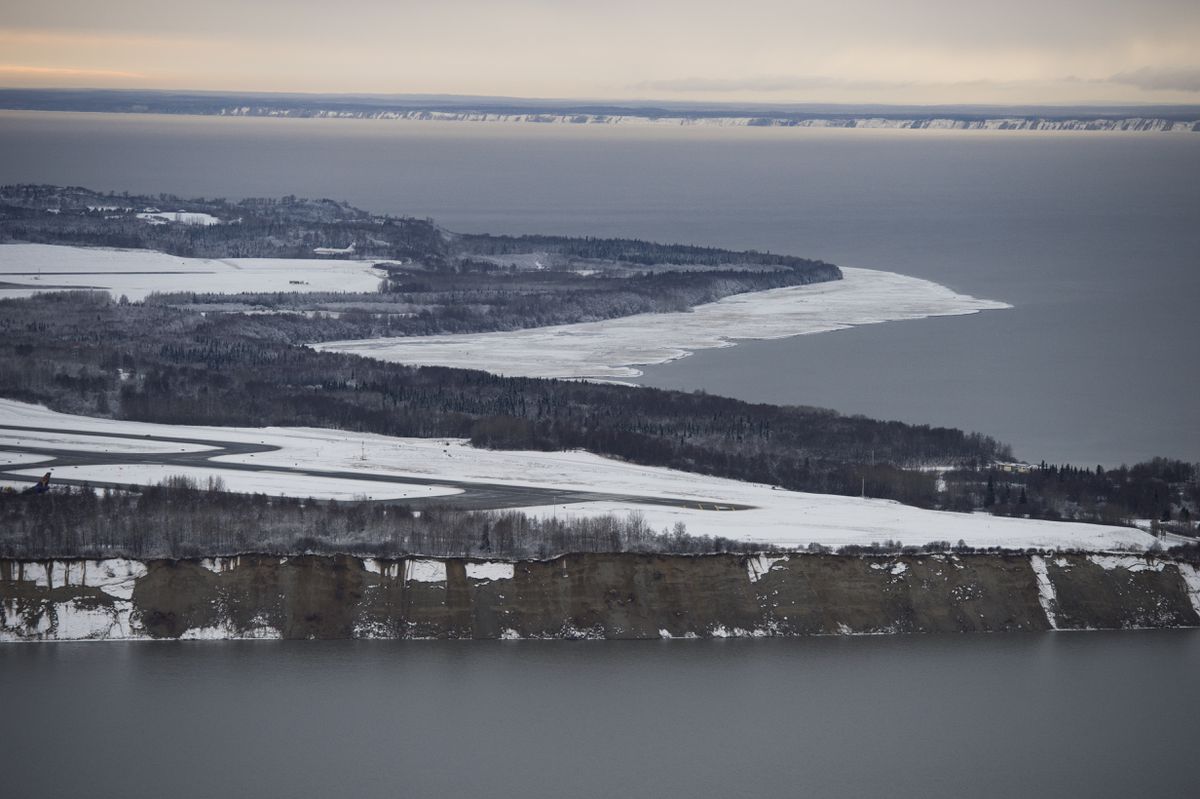 Most arrivals into Anchorage’s Ted Stevens Anchorage International Airport were halted Friday after a big earthquake shook Southcentral Alaska in the morning. By early afternoon, the stoppage was lifted and airport operations were back to normal by evening.

The Federal Aviation Administration control tower at the airport was not allowing most arrivals as of noon on Friday, FAA spokesman Allen Kenitzer said in an email.

“Inspectors need to make sure the runway is safe,” Kenitzer said.

By about 1:15 p.m., both arrivals and departures were allowed, he said, but everything was "at a reduced rate.”

As of about 6:30 p.m., airport operations were “back to normal," said Alaska Department of Transportation spokeswoman Meadow Bailey. Earlier in the day, arrivals and departures had been experiencing delays and the airport had been operating at a reduced capacity, she said. Light fixtures, windows, and water pipes in the terminal buildings were damaged.

“Really any impacts have been mitigated,” Bailey said Friday evening. Repairs have been made and some may be ongoing, she said.

Traffic barricades were up at the Anchorage airport midmorning, rerouting drivers away from departure and arrival ramps. By evening, the normal routes for pick-ups and drop-offs were open again, Bailey said.

Most of the planes that were headed to the Anchorage airport while arrivals were stopped were rerouted to Kodiak, Fairbanks, and Kenai, Kenitzer said.

Alaska Airlines suspended its operations at Ted Stevens Anchorage International Airport until at least 11:30 a.m. Friday to allow for a safety assessment of the facility and infrastructure, spokeswoman Ann Johnson said in an email. Arrivals and departures in and out of Anchorage were paused during that time, she said.

As of about 12:30 p.m., the suspension of Alaska Airlines operations at the airport had been lifted, according to the airline’s website.

“Flights are starting to arrive and depart to and from Ted Stevens International Airport,” the website said, adding that passengers may experience delays as operations resume fully throughout the day.

General delays for flight arrivals and departures were about 15 minutes or less as of about 6:30 p.m., according to the FAA’s website.

At the Port of Alaska in Anchorage, there was some minor dock damage and also some “fairly big” cracks in the ground, said spokesman Jim Jager. There were no known injuries at the port and no known fuel spills, he said.

“We had quite the shake," Jager said. “I can tell you I’m going to need new computer monitors in my office.”

As of Friday afternoon, there didn’t appear to be any port damage that would affect cargo handling, Jager said. The next ships are due to the dock on Sunday. The plan is to do a more thorough dock assessment Saturday morning at low tide, Jager said.

A tanker was pumping fuel into the port at the time of the earthquake, Jager said, and it still had about 12,000 barrels of fuel on board. Operations stopped immediately when the quake happened and any fuel that would have been in danger of spilling has been secured, Jager said.