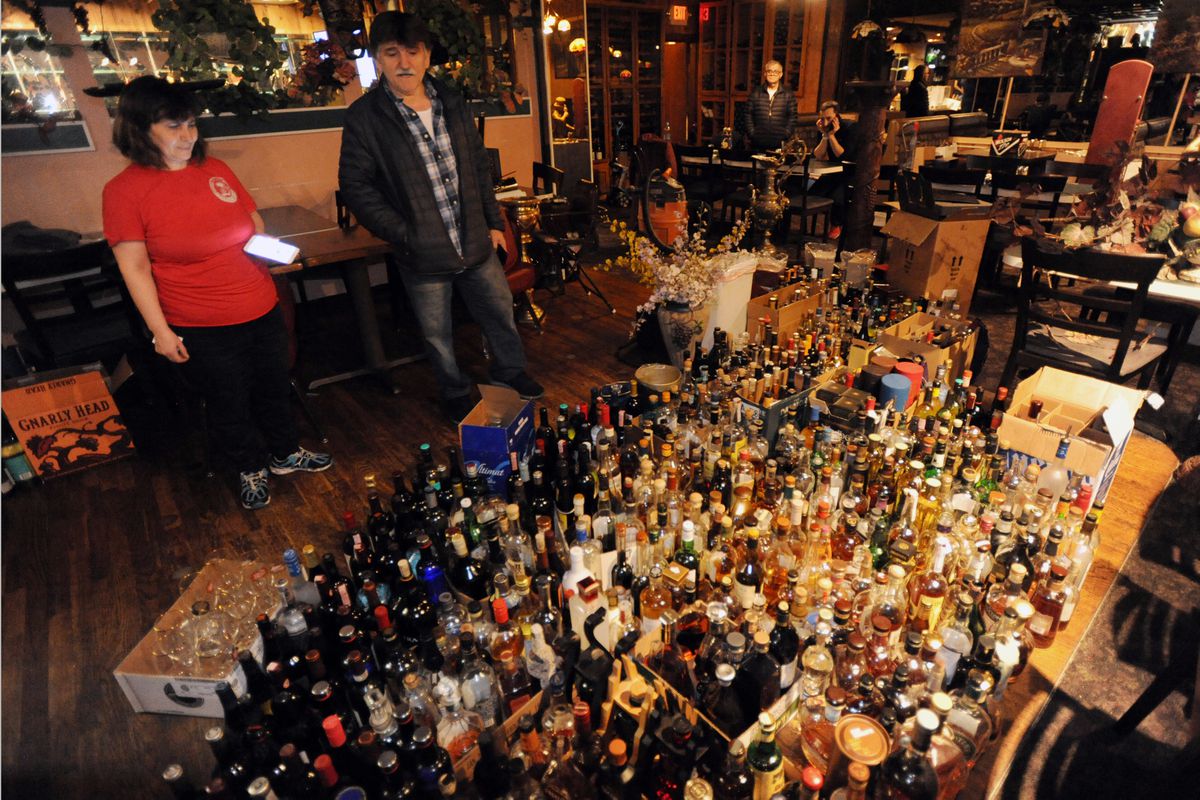 Ulber Ferati and his wife Urime, owners of Fiori D' Italia in Spenard looks at liquor bottles salvaged after the 7.0 earthquake knocked the bottles off shelves behind the bar on Friday, Nov. 30, 2018. (Bill Roth / ADN)

Ulber Ferati and his wife Urime, owners of Fiori D' Italia in Spenard looks at liquor bottles salvaged after the 7.0 earthquake knocked the bottles off shelves behind the bar on Friday, Nov. 30, 2018. (Bill Roth / ADN)

At a Muldoon coffee hut, syrup bottles fell from above. At Costco on Dimond Boulevard, the lights went out and sprinklers gushed. At a classic Spenard bar, rare liquor bottles shattered.

Those were some of the scenes at businesses around Anchorage as a 7.0 earthquake Friday morning sent buildings lurching and products spilling onto floors. Some businesses closed for the day.

In South Anchorage, at the Long Branch Saloon bar and restaurant, about 100 liquor bottles fell off the shelves and nearly 100 beers came out of the coolers as a result of the 8:30 a.m. quake, owner Glenn Kent estimated.

Employees busted out snow shovels to haul away the glass that once held Patron, Crown Royal, Jack Daniels and more.

“They just shoveled it up and put it in the trash cans and we were ready to open by 9:30 a.m.,” Kent said. “I couldn’t believe it. It was amazing.”

Then there was the coffee hut barista who hoisted herself into the drive-thru window to avoid getting hit by items falling all around her.

It was the middle of the morning coffee rush at Brew D' Licious on Muldoon Road at East Sixth Avenue. There were customers on either side of the hut, and Kali Mulherin was talking to them when the shaking started.

Out the window, she saw streetlights swaying. At the Tesoro gas station next door, the roof waved.

“It was a really surreal feeling,” Mulherin said. “The syrup bottles started falling everywhere. I had no choice but to jump up on the windowsill ledge."

Bob Ripley, the general manager at the Costco on Dimond, was sitting on a C-130 aircraft at Joint Base Elmendorf-Richardson just before the quake hit. He was getting ready to fly to Gambell with the Alaska cNational Guard to hand out Christmas gifts.

While the plane was taxiing, Ripley thought it was just going over some rough spots on the tarmac. The flight didn’t end up taking off, and he headed to Costco to assess the situation there.

Soon after the shaking started, the Costco lights went out, Ripley said. Some of the sprinkler heads broke. That added to the pandemonium.

“It was really apocalyptic,” Ripley said.

Cases of wine fell. Seasonal products, like 53-inch plush teddy bears, were soaked beyond salvaging. An inch or two of water covered the sprawling sales floor, more products lost to water damage than items breaking. None of the high-stacked pallets fell, Ripley said.

“There’s a couple people who either their boiler or furnaces was shaken so hard that the plumbing or attachments actually broke and shifted away from the wall,” said Emily Knowles, vice president of the company.

“We’re trying to deal with those people (who are without heat) as quick as we possibly can,” she said.

About 70 percent of the bottles on the bar wall at Spenard Italian restaurant Fiori D’Italia fell and shattered during the earthquake, said owner Ulber Ferati.

Ferati and his wife had been in the kitchen, doing early preparations for a scheduled Christmas party this evening when the shaking started. He pushed his way out of the kitchen and thought “Oh my, the bar,” he said.

The bar held hundreds of bottles of liquor, including rare and specialty products worth as much as $6,000. His bartender son was devastated by the mess.

Long Branch Saloon probably lost about $5,000 worth of product, Kent said. Hundreds of dollars' worth of coffee syrup at Brew D' Licious broke.

Through the mess and anxiety, there was still a sense of needing to keep the doors open at some shops around town.

Employees who weren’t scheduled to work Friday still showed up at Andy’s Ace Hardware in East Anchorage. There were products spilled in every aisle, said owner Stephanie Van Ness. Some of it was cleaning chemicals, some of it was light bulbs.

And then there was the “swimming pool” of sticky soda, from at least 100 broken bottles. But the store still opened on time.

“There was never a hesitation to stay open,” Van Ness said. “That’s what we do. We’re here for our community. ... In a time of crisis, that’s when people need a hardware store."

All day, the store sold pipe, generators, flashlights, batteries. Some customers were anxious, she said.

“Others were just that mindset of, ‘I need to get all the stuff I should have had to begin with.’”

The Costco bakery, deli and food court aren’t operating yet, pending inspection, Ripley said. The store opened at about 3:30 p.m. even though there was still cleanup to do.

“There were people out front in tears wanting water,” he said, and staff gave water away at one point.

Contractors at Taylored Restoration, a company that provides emergency repair services, barely had time to check on their own families before they were were deluged with calls about fires and flood damage.

Co-owner Trent Taylor said the team would be working through the night and weekend attending to the massive wait list of people needing repairs, and predicted the staff would be grappling with the fallout of the earthquake for months to come.

Taylor said his evacuated team was standing in the parking lot when they told themselves, in Taylor’s words, “This is what we do. We’ve got to help people.”

But the Midtown Fred Meyer was full of people, both in the store and waiting to fill up their gas tanks.

Shelves that usually hold water were nearly empty around 5:30 p.m., save for sparkling Perrier and San Pellegrino. Rolls of paper towels lined the bottoms of shelves, sopping up liquid. A sign on a self-checkout kiosk read: “We have currently set the cash back limit to $20 ONLY as to preserve our on hand cash funds.”