As Anchorage restaurants and bars get ready to reopen once again, the future remains murky for many 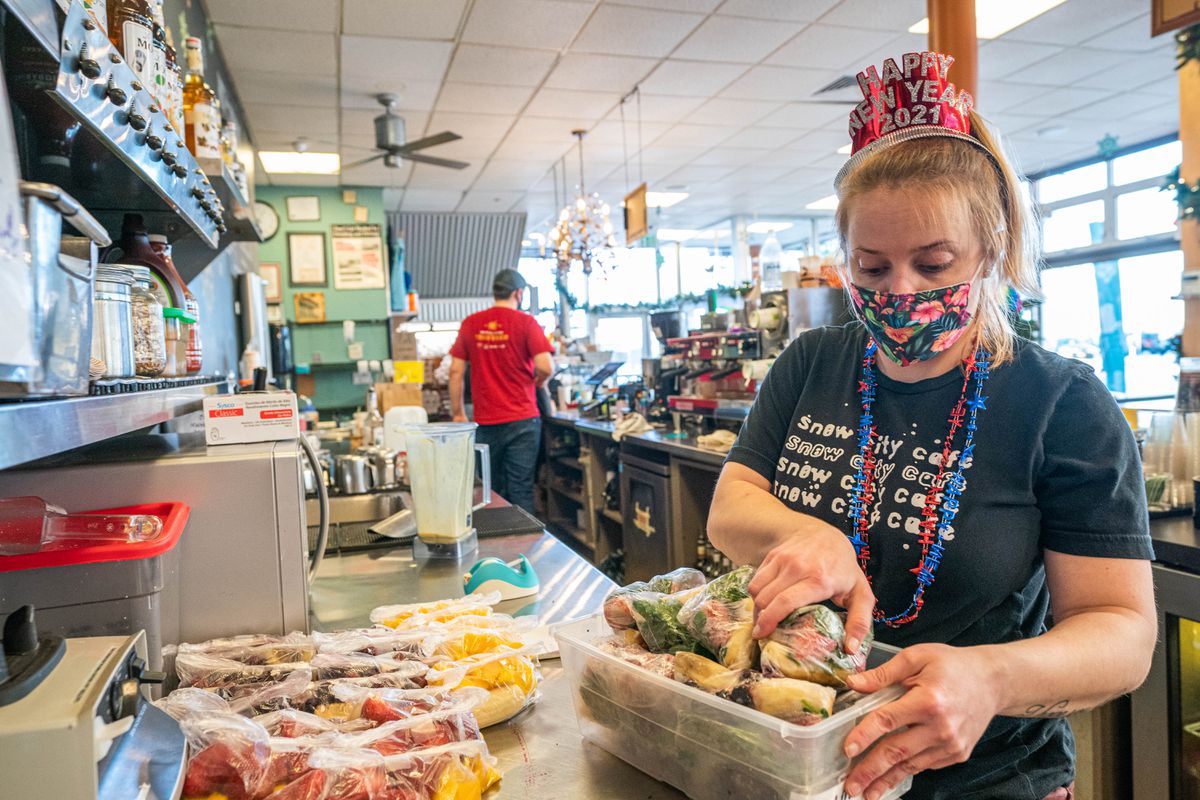 Lauren Cronin preps bags for smoothies at Snow City Cafe on Thursday, Dec. 31, 2020 ahead of the re-opening of dine-in service for Anchorage restaurants on Jan. 1. (Loren Holmes / ADN)

Lauren Cronin preps bags for smoothies at Snow City Cafe on Thursday, Dec. 31, 2020 ahead of the re-opening of dine-in service for Anchorage restaurants on Jan. 1. (Loren Holmes / ADN)

For the third time since the coronavirus pandemic started, restaurants, bars and breweries across Anchorage are once again preparing to reopen their doors for in-house service.

Employees are measuring out 10-foot distances between tables, as required by the city. They’re preparing customer sign-in sheets for contact tracing. They’re restocking their inventories, hoping they don’t buy too much food or prepare too little.

Many of the businesses owners are not sure if they can do this again.

Surviving the pandemic is one of the most challenging obstacles in a restaurateur’s career, said Laile Fairbairn, managing member of Locally Grown Restaurants, which owns the popular Anchorage eateries Snow City Cafe, Crush Wine Bistro, Spenard Roadhouse and South Restaurant and Coffeehouse.

Acting Mayor Austin Quinn-Davidson’s latest emergency order, EO-17, lifts the monthlong indoor dining shutdown but will limit those businesses to operating at just 25% of their maximum capacity. City leaders say they are walking a tightrope as they try to balance a public health crisis and limited hospital capacity with an economy that is crumbling as the pandemic drags on.

But bars, restaurants and breweries — among the businesses most impacted by pandemic-related restrictions — say they’re just barely hanging on. Some have closed permanently.

“It’s hugely scary for our staff and our livelihoods and our investments,” Fairbairn said. “But that’s the hand that’s been dealt by this pandemic.”

Keeping the lights on

For many of the businesses, opening at just one quarter capacity is better than nothing, said Chris Anderson, president of Glacier Brewhouse and ORSO in downtown Anchorage. Still, others are unsure that it will be enough to keep their doors open for long.

At Wu’s restaurant, it costs thousands each month just to keep the lights and electricity on. Then there’s the property mortgage. The cost of food. And, of course, payroll.

The restaurant has burned through its savings, she said. Wu said her sister recently refinanced the family home just so she could keep the lights on and employees paid.

The business isn’t small, but it can’t afford to pay an employee to organize marketing or restructure the business for better to-go operations like some of the more well-established restaurants and breweries in town.

Wu said she and her family do it all — they wash dishes, cook, clean, do the marketing. They even do their own snow plowing.

One moment Wu is posting on social media and brainstorming how to better engage with customers. The next she is trying to figure out whether to pay the inventory or the electricity bill, and whether she can work without paying herself, instead of paying an employee for the shifts, so she can maybe pay both bills.

If the new round of federal pandemic relief money does not come soon, the restaurant will be forced to shut down its operations entirely by March, Wu said.

Fairbairn, a longtime and successful restaurateur, said that 20 years ago, her restaurant would have been devastated by the pandemic.

She worries for the future of Anchorage.

“It really damages the fabric of a community when you don’t have a wide variety of restaurants and bars, because they’re gathering places and they’re community hubs,” Fairbairn said. “It’s really important that that they remain viable.”

‘I can’t tell you how overwhelming it is’

The pandemic restrictions and mayor’s emergency orders have also led to deeper community rifts, galvanizing a vocal group of opponents. During the indoor dining shutdown in August, a few restaurants defied the order and refused to close their doors. The city’s mandates were upheld by the courts after brief legal battles.

Still, protests continue at Anchorage Assembly meetings, and public testimony at the meetings is often fraught. On Tuesday night, following the acting mayor’s announcement of the newest emergency order, a small group of vehicles drove in a caravan to honk their horns and protest outside the homes of Quinn-Davidson and Assemblyman Christopher Constant.

But the most painful part of the pandemic has been the layoffs, she said.

“I can’t tell you how overwhelming it is,” Bradley said.

[The pandemic relief bill will provide much-needed help for Alaska businesses. The money is expected to go quickly.]

To help keep the restaurant afloat, she laid off her highest-paid, most loyal employees — people who felt like family. They were understandably angry, she said. Most had never been unemployed before and didn’t know where to get help.

Bradley said she is furious that the city offered no targeted help to employees laid off due to the monthlong dine-in shutdown.

“What was devastating about December was they had nothing. No safety net. No lifeline. Just a $100 grocery card from the muni,” she said.

[Most Alaskans are wearing masks and believe they work, survey shows]

Bradley has never opened her restaurant for in-person dining at such a limited capacity. She isn’t sure that it will work well in her restaurant, or if opening with just five tables will actually pay for a server, she said.

Fairbairn’s restaurants are reopening at limited capacity this weekend, and she said doing so is a question of staying relevant to her customer base. Still, not many of her customers are ready to dine inside yet, she said.

Wu also said that even when China Lights was open for dine-in, business was slow.

‘We have to quit arguing amongst each other’

COVID-19 case numbers are generally going down in Alaska, and more vaccine distributions are coming soon. But it’s no longer a question of day-to-day survival for restaurants, said Anderson, with Glacier Brewhouse and ORSO. Longer-term plans are needed to save as many small businesses as possible.

“What does 2021 look like? It’ll take us all year to recover to get any sort of normal operation,” Anderson said.

He and a coalition of restaurants had pitched a plan to the city that would have implemented some stricter mitigation practices but allowed businesses to operate at 50% capacity. City leaders turned it down, saying that while the enhanced mitigation practices were a good idea, it would not change the risk of indoor dining.

Though their businesses and employees are suffering, Fairbairn and Anderson said they understand the predicament that city leaders are in as they try to navigate the pandemic.

“I don’t blame local government for how they’re handling it. I wouldn’t want that job. And I know that they have the weight and the burden of our health on their shoulders,” Fairbairn said. “They are the ones listening to the health experts, and they’ve got to do what they think is right for the community as a whole.”

And clearly, the pandemic is far from over, Anderson said.

“We have to quit arguing amongst each other and start looking forward and working together, that’s what Alaskans do,” Anderson said.

“Anchorage is an island — we don’t have anything that can bail us out except for ourselves, and the government can’t do it,” he said.

Hospitality industry leaders say they are working closely with city officials, but that the impact of the restrictions will ultimately decimate a once-thriving industry.

“A lot of these restaurants and people are at their breaking points. They’re at a point where it’s like, ‘If I don’t fight, I die,’ ” Anderson said. “But there just isn’t a solution that is equitable that I know of.”

“That’s the next hurdle — to stop reacting to daily situations and start thinking about and planning for the future,” Anderson said.