The Anchorage election is Tuesday. Here’s how to vote - and what happens next. 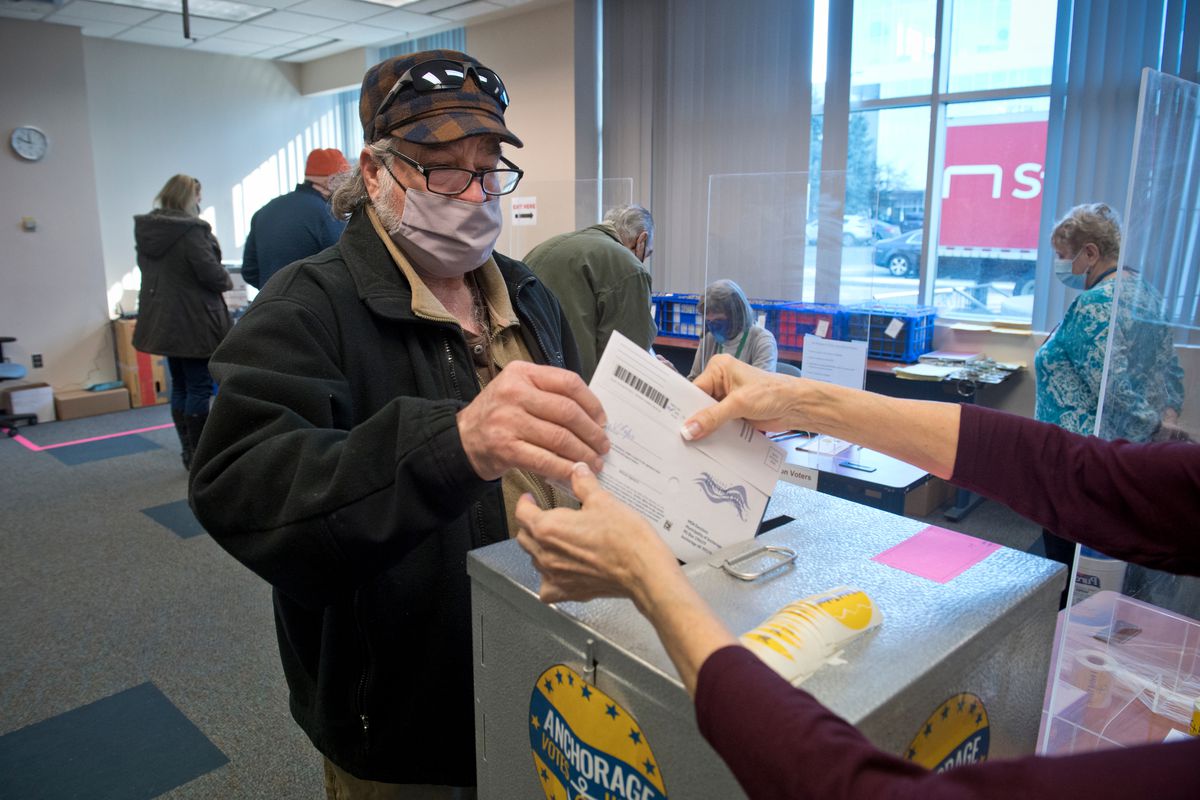 Tony Lofaso casts his ballot at the in-person voting location at City Hall in Anchorage on April 5, 2021. (Marc Lester / ADN)

Tony Lofaso casts his ballot at the in-person voting location at City Hall in Anchorage on April 5, 2021. (Marc Lester / ADN)

Tuesday is the final day to vote in Anchorage’s city election.

Voters will choose a new mayor and four of seven school board members, along with deciding 11 ballot propositions. Midtown voters will decide whether to recall Anchorage Assembly chair Felix Rivera.

Ballots were mailed out on March 15, and ballot envelopes must be postmarked by Tuesday, April 6 to be counted.

Here’s what else you need to know to vote:

Where to go to vote

In addition to mailing in your ballot, you can also drop off ballots in one of 18 secure drop boxes around the city.

There is a map of drop box locations on the municipality’s website.

If you would prefer to vote in person, or if you have lost or damaged your ballot, head to one of the three vote centers in the municipality. They are open until 6 p.m. on Monday and from 7 a.m. to 8 p.m. on Tuesday.

• The Loussac Library, 3600 Denali St., in the Assembly chambers.

So far this year, voter turnout is down compared to all but one year since the city started using the vote-by-mail system in 2018. That was also the last year that the city elected a mayor, and it brought in a record turnout.

As of Friday, a few more than 34,100 people had voted, according to data from the municipal clerk’s office. That’s just about 14% of the more than 236,000 registered voters in the Municipality of Anchorage.

[Here’s how to be sure your ballot is counted]

The city clerk will release a preliminary vote tally on Tuesday night at about 8:30 p.m., but the results won’t be final as there will be more ballots to process. McConnell said that last year, the first tally included about 70% of the total ballots cast.

So many mayoral candidates, you’ll probably get to vote for one again

With 15 candidates for mayor and four of seven seats up for election for school board, voters have their research cut out for them.

The Anchorage Daily News compiled an election guide with survey questions and answers from the mayoral candidates and the school board candidates. You can find it at adn.com.

Because there are so many candidates for mayor and one candidate must get 45% plus one vote to win outright, it’s predicted that the election will result in a runoff on May 11.

The race is technically nonpartisan, but candidates for mayor vary widely in their stances on issues like homelessness, how to improve the city’s economy and the COVID-19 pandemic.

Four seats are up for election on the Anchorage school board. There are a host of candidates, with six running for seat E and another four each for seat F and seat B. School board president and incumbent Elisa Vakalis faces one challenger for her current position, seat G.

Three of the open seats are for the usual three-year term, but whoever is elected to seat B will serve a one-year term. That person will be finishing member Starr Marsett’s term. She resigned this year.

Unlike mayoral races, there aren’t runoffs in school board races, and the candidate with the highest percentage of votes wins the race.

There are also 11 propositions on the ballot, including seven bonds for funding maintenance and improvement projects, including for fire, police, roads and parks, totaling $59,580,000.

You can find descriptions of the propositions and bond projects on the city clerk’s website. There are also fact sheets available on each bond project on the Office of Management & Budget website.

The city pays the bond debt through property taxes. If all seven bonds pass, the maximum total increase to property taxes would be about $15 per $100,000 in assessed property value.

Not all property owners would pay taxes for each bond, and many would see a tax increase of less than $15. It depends on what service area of the city you live in. However, all voters will see each bond on the ballot, even if the proposed tax increase would not affect them.

Notably, Proposition Four is a property tax levy, and would fund body cameras for Anchorage police, along with updating its computer-aided dispatch and record management systems and installing new in-car cameras.

Only Assembly District 4 voters will decide whether to recall Rivera. Proponents of the recall say they see the vote as a “referendum” on the entire Anchorage Assembly and its actions over the last year.

The actual recall proposition claims that Rivera failed to perform his duties as Assembly chair when he did not halt the meeting after another Assembly member said it may have exceeded the pandemic capacity restrictions.

When will my vote be counted?

The elections center is currently processing the ballots it has already received, but there will not be any election results until Tuesday evening around 8:30 p.m. Even then, the results are preliminary, and will continue to change as the elections center processes ballots through the next week.

Most ballots have until April 16 to make it to the elections center and be counted (as long as they are postmarked by April 6).

An update to city code this year allows overseas ballots that are postmarked by April 6 to be received and counted up until the day of the certification of election results on April 20.

If you’re interested, you can watch a livestream of ballot processing on the Municipality of Anchorage Election Center’s YouTube channel.

Now that you have everything at your fingertips, it’s time to open that ballot and fill it out.

Correction: A previous version of this story incorrectly said that vote centers open at 9 a.m. on Tuesday; they open at 7 a.m.