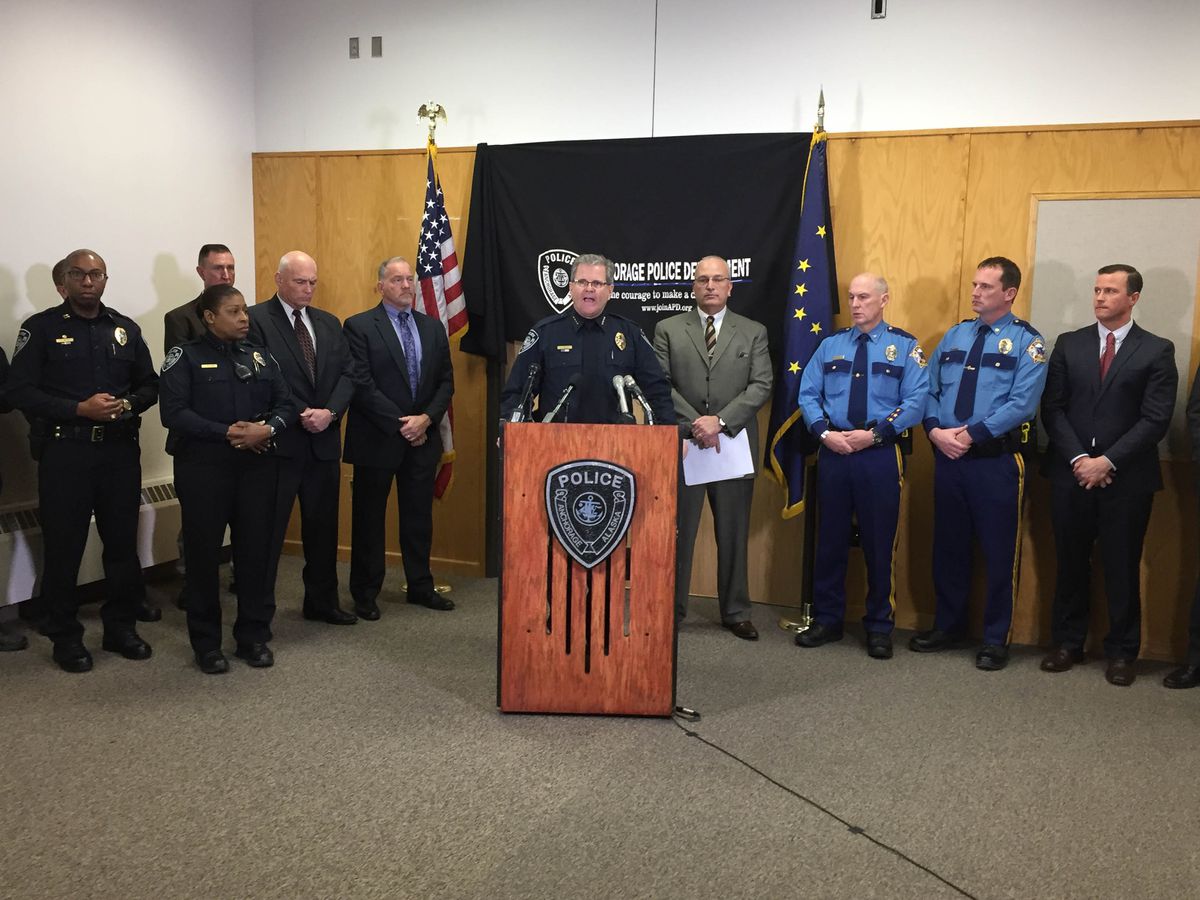 A gun used to shoot a police officer Saturday morning was the same weapon used in at least five homicides in the city so far this year, including two unsolved double homicides, Anchorage police said Tuesday (Nov. 15).

The Anchorage Police Department officer who was wounded, Arn Salao, was shot four times and underwent two surgeries after the confrontation, but was recovering and expected to survive. The suspect, 40-year-old James Dale Ritchie, was killed after Salao and Sgt. Marc Patzke — who arrived during the shootout — returned fire, police said.

"We know from our investigation in the last 78 hours that the gun used to attempt to kill officer Salao was the same gun used in five other homicides here in Anchorage in 2016," APD Chief Chris Tolley said at a news conference Tuesday.

Those five homicides are:

• The July 29 death of 21-year-old Treyveonkindell Thompson on Bolin Street in East Anchorage;

Tolley previously described Saturday's shooting as an "ambush" that came as the officer responded to a report of a theft suspect. Salao was shot while he was still inside his patrol vehicle, APD spokesperson Jennifer Castro said.

Castro stressed Tuesday that although the gun used to shoot Salao — a Colt Python .357 — had been linked to the five homicides, police were still investigating Ritchie's possible ties to those crimes.

It wasn't clear if Ritchie, an East Anchorage High School graduate, had any connection to any of the victims in the summer homicides.

"We still have not linked the suspect to these cases, so we still have more work to do," she said.

"Our investigations are open," said Lt. John McKinnon, head of APD's homicide and robbery/assault units. "The big thing is that the cases are still pending and we'll follow the evidence wherever it goes, and we'll make determinations on what cases we can or cannot close at a future date."

Police said Tuesday another as-yet-unsolved double homicide, which took place in January at Point Woronzof, was not connected to the other homicides.

Who was James Ritchie?

James Dale Ritchie grew up in East Anchorage and was a standout athlete at East Anchorage High School. He and his two sisters and parents lived in a home in the Wonder Park neighborhood, public records show.

At East, Ritchie was an offensive lineman on the 1994 state championship football team, according to news articles from the time. He also played on the state championship basketball team. Teammates remember him utilizing his 6-foot, 3-inch frame as a power forward.

"There were colleges looking at him in high school," said Donteh DeVoe, a former basketball teammate who played alongside Ritchie at East. "He had potential to go on to the NFL. He was a great athlete."

"He was a happy, positive person in high school. It's shocking to me," said Mao Tosi, another high school teammate.

Ritchie graduated from East in 1994, the same year Arn Salao — the Anchorage police officer injured in Saturday's fatal encounter — was attending the school as a freshman. It wasn't clear if the two men were acquainted with each other.

After high school, Ritchie's athletic dreams were derailed by drugs and a felony record. His first encounter with police occurred in 1998, four years after he graduated.

A search revealed ammunition on Ritchie, along with a number of folded bills and a baggie filled with several rocks of crack cocaine. Officers also found an electronic scale in the bedroom and the owner of the apartment told police Ritchie and her son were apparently selling drugs.

Ritchie pleaded no contest to felony misconduct involving a controlled substance in the third degree. He was sentenced to three years probation.

In a letter to the judge in his case, Ritchie wrote that he "lay in bed every night thinking about how I've ruined my life. Then I sit up crying wishing I could go back to when I was in high school."

Ritchie wrote he would have "chosen a small Division II school to go play football at instead of a Division I college."

"I want to finish college, raise a family and buy a house," he wrote. "Instead as a felon I'll never be able to get a good job."

It's not clear whether Ritchie actually played college football.

There was more trouble to come.

On parole in 1999, Ritchie was pulled over for driving erratically near Columbine Street and DeBarr Road. Ritchie told officers he had been drinking tequila and beer and taken two Prozac pills. Officers found crack in the glove box and a loaded .45-caliber semiautomatic handgun in the passenger seat, as well as an open beer on the passenger floor of the car, court records show.

Ritchie again pleaded no contest to fourth-degree misconduct involving a controlled substance. He was sentenced to three years probation.

In the year 2000, Ritchie filed for a business license for a vending machine servicing operation called Ritchie Enterprises, using his parents' address. It's unclear whether it got off the ground.

From 2002 to 2005, Ritchie was arrested several times for parole violations, mostly serving time for those violations in halfway houses, according to state Department of Corrections spokesperson Corey Allen-Young.

In 2005, Ritchie was arrested for first-degree burglary after police responded to a report of an East Anchorage break-in. Officers found a large wad of money on Ritchie totaling almost $5,500 and eight zip ties in his front coat tied into a set of "flex cuffs." Two guns were later found in the house occupants of the residence said did not belong to them.

Ritchie pleaded no contest in the case. Allen-Young said Ritchie spent just over two years in custody before being released on Nov. 16, 2007.

Ritchie had not been in correctional custody in Alaska since then, Allen-Young said.

The last time Ritchie applied for a Permanent Fund dividend was in 2009, according to public records. The last time he had a listed address in Anchorage was a house on Lane Street, in the Russian Jack neighborhood, in 2011.

It appears he spent some time in Virginia after that, where his parents live in Broadway, a small town not far from the West Virginia border.

On his Facebook page, he posted pictures at the end of January from travels around the Lower 48. Police are still investigating where Ritchie was living in recent months.

He was not homeless, and may have resided at more than one location, said Castro.

"We are hoping to get more information from the community about his daily whereabouts and activities," she said.

Reached separately by phone, Ritchie's mother and sister declined to speak on Tuesday.

"The last time I'd seen him was at a restaurant about a year ago," said DeVoe, Ritchie's former Thunderbirds basketball teammate. "He still looked young and healthy. It seemed like we were back in high school."

It was a brief encounter that ended with a smile and a hug, DeVoe said.

Authorities had been tight-lipped about a number of unsolved Anchorage homicides this year, despite the involvement of the FBI and widespread rumors a serial killer was roaming the city or that some of the killings were linked.

Witness accounts allowed police to create a sketch of a "person of interest" in the Treyveonkindell Thompson case. The FBI offered a $10,000 reward in early September for information in the case that generated more than 175 tips, according to an investigative timeline released by police on Tuesday. Police had also canvassed neighborhoods and homeless camps in areas near the shootings.

The State Crime Lab determined "a few days" after Thompson was killed that the same gun was used in the deaths of Foisy, Netter and Thompson, Castro said. That information was not made public.

After the Valley of the Moon killings, police determined the same gun was used again. At that point, "police still did not know who the shooter was or if there was more than one," according to the investigative timeline. Tuesday marked the first time police publicly acknowledged Turner and DeHusson had been shot.

Police say they withheld the fact that the same gun had been used in the five homicides — even from the families of the victims — over concerns releasing it would compromise the investigation.

McKinnon said police were trying to preserve the evidence — a strategy he believes led to the recovery of the gun after Saturday's shooting.

"If we had made a big deal about it, then it might have gotten lost or disposed of," McKinnon said.

"Without the ballistics and that gun, we had no evidential way of tying these cases together," Castro said. "That's how important that gun is."

The victims' families found out about the connection between cases prior to a Tuesday morning press conference, according to Billy Ray Turner, Kevin Turner's brother.

On Monday night, police contacted Kevin Turner's family and told them to come to a conference the next morning, said Billy Ray Turner. It was the first time they'd heard from law enforcement since shortly after his brother was killed at Valley of the Moon, he said.

Billy Ray Turner said he initially searched for answers in his brother's death, but detectives told him not to go digging. They weren't specific about details, but he said they told him if Kevin Turner was killed in such cold-blooded fashion, Billy Ray might be in danger if he came in contact with the person responsible.

His mother worried about the same scenario, so he stood down.

He started to think his brother's homicide investigation had turned cold, and another family could lose a loved one with the killer still on the streets, he said.

That's something he still hopes to find out.

"I want to know where was he shot, how long was he alive, did he suffer? These are the things I'd like to know," Billy Ray Turner said, adding he hoped the new evidence would serve as a turning point for more transparency in the case.

In late August, a notice went out to the public to avoid isolated trails or roads alone at night, though APD declined at that time to say if the warning was related to any of the recent homicides.

"We were trying to balance the best of both worlds without jeopardizing a case or investigation," Castro said of the warning.

Anchorage Mayor Ethan Berkowitz said police briefed him Monday afternoon on the revelation about the weapon used in the five unsolved homicides. He said he was previously unaware of any connection between the slayings.

Berkowitz said he had "actively stayed away" from pursuing information from police about the cases, citing his two years of experience in the Anchorage district attorney's office in the early 1990s.

"I think it's inappropriate for the civilian authority to intervene in a police investigation," Berkowitz said.

Berkowitz also said he did not think the police erred in withholding the information, or inappropriately prioritized an investigation over public safety.

"I would suspect that the police had access to all kinds of psychological understandings of what a person who is engaged in this kind of behavior would do and how they would behave, and shaped their investigation accordingly," Berkowitz said.

He added: "I think it's a vast oversimplification to think that the police should have compromised their investigation simply to inform the public about the course of their investigation. There's a real possibility the wrong communication at the wrong time could have jeopardized public safety."

Earlier coverage: Anchorage is on track to break the record for most homicides in one year. What's going on?