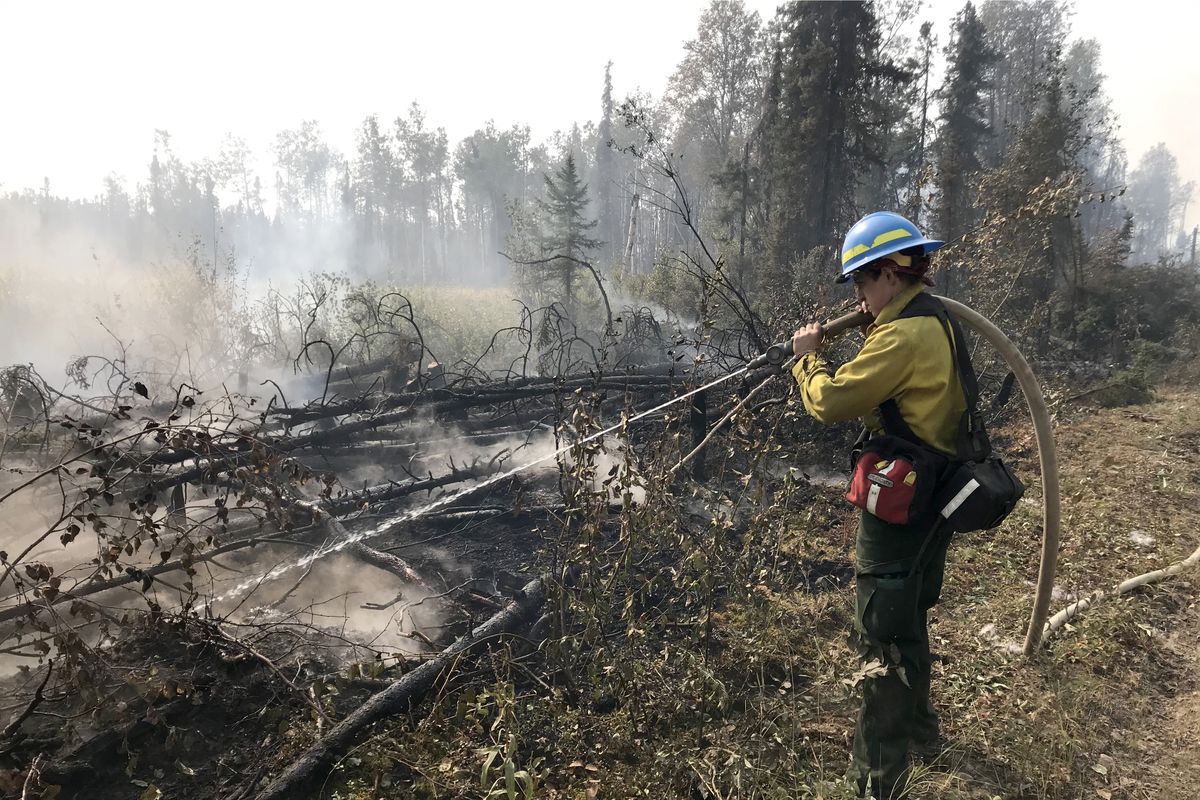 Firefighter Jess St. Laurent with the Chugiak Volunteer Fire Dept. mops up a hot spot on East Swamp Robin Road, Tuesday, Aug. 20, 2019. The McKinley fire continues to burn after flaring up over the weekend, closing the Parks Highway and burning many structures. (Bill Roth / ADN)

Firefighter Jess St. Laurent with the Chugiak Volunteer Fire Dept. mops up a hot spot on East Swamp Robin Road, Tuesday, Aug. 20, 2019. The McKinley fire continues to burn after flaring up over the weekend, closing the Parks Highway and burning many structures. (Bill Roth / ADN)

Several wildfires continued to burn Tuesday in Southcentral Alaska, casting a blanket of smoke over Anchorage and the Kenai Peninsula.

The Matanuska-Susitna Borough declared a disaster emergency over multiple wildfires sparked over the weekend and driven by high winds.

Several fires in Southcentral started in the past few days in a region that has had exceptionally dry weather and record high temperatures throughout the summer.

Here’s a look at the five major fires in the area, according to the Alaska Wildland Fire Information website, the National Wildfire Coordinating Group and agencies involved in tracking the fires.

This information is current as of early evening Tuesday, unless otherwise specified. This story will be updated as figures change and new information becomes available.

Location: On the Kenai Peninsula, northwest and west of Cooper Landing and about 5 miles northeast of Sterling.

Other information: The Sterling Highway was closed from Mile 53 to Mile 75 as of about 6:20 a.m. Wednesday morning, according to the Alaska Department of Transportation.

The Swan Lake fire caused the closure of the highway multiple times earlier this week from Mile 53 to Mile 77. It had reopened late Tuesday afternoon, though officials cautioned drivers to watch for pilot car escorts, flaggers and firefighters.

Fire crews were working Tuesday to establish control lines on both the southeastern and southwestern edges of the fire to keep it from spreading to those communities.

The Swan Lake fire was at about 20% containment as of late Tuesday evening.

Location: North of Willow in the Susitna Valley.

Cause: Officials initially attributed the fire to wind blowing a tree onto a power line Saturday near Mile 91 of the Parks Highway. On Tuesday, wildfire officials said the cause of the fire is now under investigation.

Other information: An evacuation order remained in effect Tuesday morning for the fire area from Mile 82 to Mile 91 on the Parks Highway. People were evacuated this week from neighborhoods near the fire. State fire officials estimate 50 to 80 structures have been lost in the fire. Firefighters are continuing efforts to assess and protect structures.

The Parks Highway has been limited to one lane with pilot car escorts between miles 71 and 99, causing major traffic delays. Officials asked travelers driving between Anchorage and Fairbanks to use the Glenn, Richardson and Denali Highways as alternate routes.

Evacuees were not expected to be able to return home until next week. Authorities were working from the north end of the fire southward to assess the damage to the structures were burned and should be done compiling that information in about two days, the state fire marshal said.

After that point, the Matanuska-Susitna Borough will notify residents whose property has been lost.

The State Fire Marshal’s Office and Alaska State Troopers are working to account for people in the evacuation area. From the state’s fire information website: “If you know of persons who may be unaccounted for please contact the Matanuska-Susitna Borough call center at 907-861-8326. If you have questions about the McKinley or Deshka fires, or are asking about the status of your structure, please call the Mat-Su Area Forestry Information Hotline at 907-761-6233.”

Cause: Not yet determined. Fire was reported Saturday.

Other information: Winds dying down Monday helped crews fighting the Deshka Landing Fire, which had not seen significant growth as of Tuesday afternoon. The fire was 5% contained as of Wednesday morning.

On Monday morning, the fire was reported to be a half-mile west from structures on Red Shirt Lake. Crews were working on containing the fire’s eastern edge to protect at least 45 cabins around the lake.

Other information: It is a little over a mile northwest of Caribou Lake and is burning in the area of the 2007 Caribou Hills fire. Authorities said 30 structures were threatened by the fire Monday evening, but an update Tuesday said no cabins or structures were immediately threatened.

Smoke jumpers were deployed to the area. Aircraft helped firefighters on the ground with water and fire retardant drops.

Cause: Not yet determined. Fire was reported Sunday.

Other information: There was no reported growth of this fire overnight from Monday to Tuesday. People living along North Fork Road north of the fire and along Diamond Ridge Road to the south were placed on a “ready” notice, meaning they should be prepared for potential evacuation.

A fire crew from Oregon was on its way to the North Fork fire on Tuesday to help crews already there.

Photos: After wildfire moved through, scenes of smoke and damage along the Parks Highway

‘We gotta get out now’: People in McKinley fire’s path recount last-minute evacuations